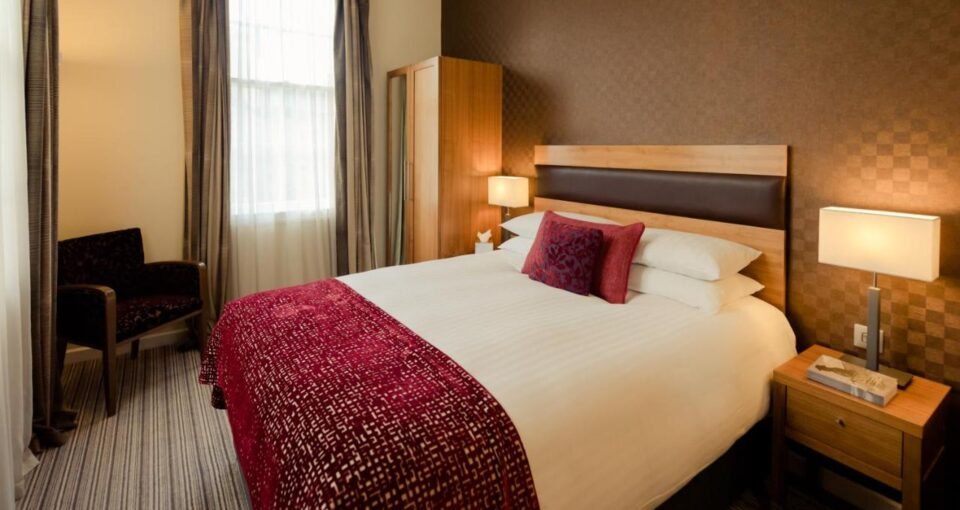 Britain’s industrial past owes much to the centrally located city of Sheffield, renowned for its durable steel on the east side of the Peak District. Like Pittsburgh in the U.S., Sheffield’s manufacturing backbone has been replaced with the softer edges of hospitality and exceptional access to outdoors. These two accolades – City of Steel and Outdoor City – make Sheffield attractive to businesses like MindBody to setup up their European operations in town.

Sheffield’s railway station has become a central point for the city, pulling it away from canals and the mills which stoked its industrial boom – Kelham. Kelham Island is now the site of new residential development, conveniently located with water frontage for running.

The Leopold Hotel is part of PREM Hospitality, operators of hotels in Belgium, Ireland and The Netherlands. Its central location in Sheffield sets it between the emerging Little Kelham neighbourhood, Sheffield’s original soul, and the more urban downtown and home to Sheffield Hallam University and and constellation of art venues, coffee shops and eateries.

The 89 bedrooms fall into three categories – Leopold Doubles, Deluxe King and Mezzanine Suites which make the most of the original vaulted windows from the building’s schoolhouse design. The Leopold Hotel has a basic gym with a treadmill, cycling machine, barbells and bench.

Nearby coffee options include Albies, Mow’s and their neighbour Tamper Sellers Wheels which has an all-day menu. For your evening meal, head west from the town centre for a meal at the illustrious Mowgli, one of the success stories from Liverpool, now with a national footprint – one hospitality success story from the pandemic.

Sheffield’s running options cover three bases – continuous running routes from the city centre, hilly trail runs only requiring a short commute and city athletics tracks – both indoor and outdoor. Cyclists can also head into the Peak District on summer evenings and make the most of the rolling terrain and short climbs. Swimmers meanwhile have a 50m pool within the city centre no more than 500m from Leopold Hotel.

From Sheffield’s city centre, running along the canal to the east serves as the most efficient way to get miles in. The indoor track is near the turnaround for a 10km out-and-back, English Institute Of Sport Sheffield.

Two other vectors are worth considering to head west towards the Peak District. One includes an out-and-back route from Rivelin Valley Natural Trail. By starting at Rivelin Valley Park, you weave upstream past waterfalls, water wheels and stepping stones until hitting the Manchester Road A57, at which point make the turnaround for a 10km run.

A second trail option takes you via Ecclesall Woods, before throwing you onto the heath to the east of Sheffield. Either route back to town to make a 15km, or loop via the Cricketers for a pub dinner.

Cyclists can head out on billiard-table-smooth roads into the Peaks due west of Sheffield, wrapping around running trails. Here’s a 43-mile loop anti-clockwise loop which connects Hathersage, Hoye and Wreston, also including Surprise View and Padley Gorge Climb. Stretch further to involve Winnats Pass, about as West as you might want to go.

Swimmers have it easy with a 50m pool in Sheffield’s city centre – Ponds Forge Olympic Pool.

For more information about Leopold Hotel, go to leopoldhotel.co.uk. I stayed in Room 466.