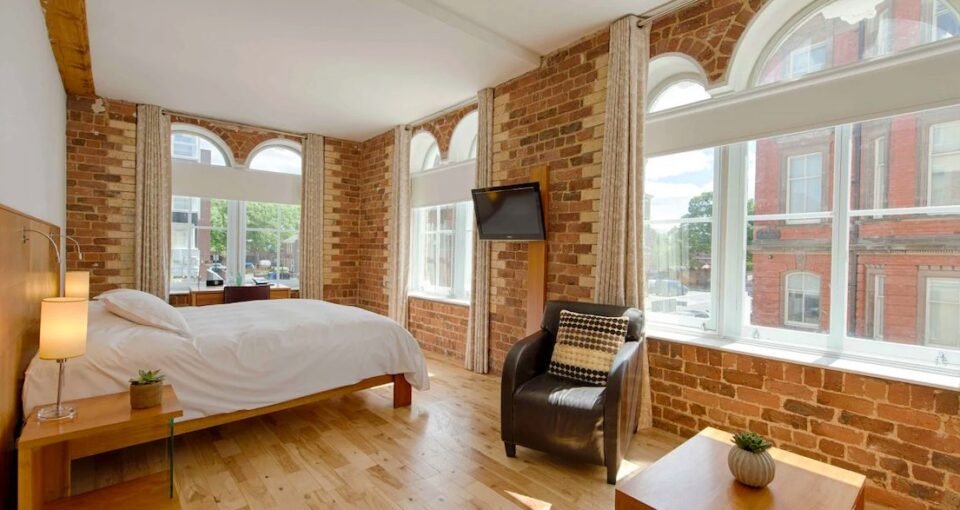 In centre of Liverpool, the prosperity of the port city’s industrial past is in view. To the south nearest the tidal Mersey River is the looming pink sandstone Cathedral, faced at the north end of Hope Street by the post-war Anglican Church. Between these are these two posts are the Streamline Moderne Philharmonic Hall, a RIBA-winning Everyman cinema and, since 2004, the current version of the Hope Street Hotel. The hotel’s architects, Falconer Chester Hall, set the scene best, writing on their website: “early Georgian townhouses rubbing shoulders with muscular Victorian Gothic, art deco elegance and boisterous sixties ‘statements’.”

The hotel holds up the outer edge of Liverpool’s Georgian Quarter, contrasting the brick facades of Hope Street with wooden cladding around the main entrance. Wood surfaces characterise interiors throughout the hotel, with a broad reception area and clean lines carrying a preemptive coronavirus design. Whatever hopes you had that the hotel’s online booking system accidentally allocated you a recommended bottle of Nyetimber Classic Cuvée can be confirmed on check-in, so too whether Liverpool Football Club have booked during your stay – a few rooms are used to accommodate players the day before a game.

The 38 bedrooms at Hope Street Hotel were added by architects Falconer Chester Hall. Though divided into seven official categories on the website, room types can be refined into four: King Standard, King Deluxe, Studio and the premium studios, suites and penthouses. The floorspace in King Standards works out to 20m² and are the most economical, especially given that twin setups are available. King Deluxe are marginally larger with super-king beds, while Studios offer 31m² with super-king beds and a decent sofa bed. Note that all rooms come with work desks and separate both-shower arrangements. Opt for a room on the north side of the building to access panoramic views across Liverpool’s town centre.

Unfortunately there is no gym but a spa is being completed with a stunning courtyard pool. REN Clean Skincare products are used for treatments, which include “steam, heat, pools, fragrance, ice and drenching” (REN are also the brand of toiletries in bedrooms). As for other auxiliary facilities: a cinema room is also expected for completion in Spring 2021, and a balcony is accessible for rooftop view Welsh mountains to the south-east.

For modest prices but also delicious food and location-specific options, look first to Mowgli Street Food who’s Indian street food theme is compelling. They have two venues in town – Broad Street is less ornate than the more central venue opposite Town Hall on Water Street. Vegetarian options with paneer are satiating, so too the vegan Holy Cow (below). Omnivores are also included on the menu, now available at a growing footprint beyond Liverpool – Manchester, Birmingham and Oxford each have a venue. Another vegan option is Down the Hatch, found within a 10-minute walk from Hope Street Hotel.

Hope Street Hotel share a threshold with The London Carriage Works who serve meals throughout the day. The menu includes a comprehensive breakfast menu and more finesse later in the day. LCW are a useful neighbour, but for going further afield with fine dining, check into Roski Restaurant which has Michelin heritage – less than five minutes by foot from Hope Street Hotel. Maray are more refined but less pricey that LCW and Roski – they have venues on Broad Street and two miles away in Sefton Park.

As for coffee in Liverpool, the corner nearest to Hope Street Hotel is home to a 92 Degrees venue. On Broad Street, drop into Broad Street Coffee and if you’re in Baltic Triangle, visit Baltic Creative (workspace) where 92 Degrees run the setup.

Runners can make the most of the continuous path that lines the eastern side of the Mersey and head south (surface types do vary). For a closed loop, make a navigation of Sefton Park which is very slightly undulating over its 3.8km loop. Liverpool Harriers AC train out of Wavertree Playground – that’s where there is an athletics track, 2.2 miles from Hope Street Hotel. The club are welcome to new joiners for a drop-in fee of £2 – arrive at the track by 6pm.

Cyclists can reach further inland towards St. Helens to complete this 40-mile loop. Club rides in Liverpool are run by Liverpool Phoenix CC Aintree and Liverpool Century Road Club. Each have annual joining fees of less than £30 should you want to join for routes during your stay – just make contact with either club beforehand to learn about planned routes and departure points.

The best swimming pool in Liverpool is at Liverpool Aquatics Centre, on the north end Wavertree Playground. It’s a full-length Olympic pool so plan for sets in 50m if the schedule, or else the boom will divide the pool to a 25m length. The pool shut in April 2019 after glass from an overhead bulb shattered, requiring the pool to be drained. This revealed further structural flaws which required a council investment of £475,000 to pay for extensive repairs – something to appreciate when completing your session.

Stretch out at Yogacita in Baltic Triangle – they have showers and changing rooms.

Visit hopestreetlhotel.co.uk to find out more and make a booking. I stayed in room 438 which had panoramic views over Liverpool looking to the north (Mersey just about visible to the West).