The Cape, a Thompson Hotel in Cabo San Lucas, Mexico 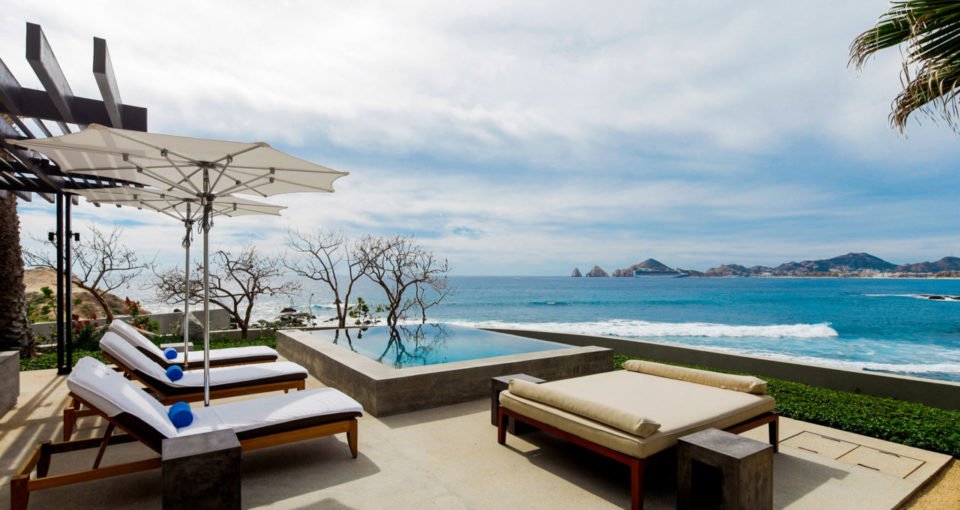 By the midpoint of this decade, the model for building a hospitality business in Mexico’s Los Cabos had already been reasonably well defined. Large outposts from the world’s major hoteliers dot the coastal axis connecting Cabo San Lucas in the East with San José del Cabo 30 miles to the West, resembling a collection of beached cruiser ships with a myriad of facilities and all-inclusive deals. Fortunately, three years ago a new hotel for opened visitors to the tip of Baja California, built in the shape of The Cape from Thompson Hotels.

The physical size and accumulative villa / suite bed count of The Cape wouldn’t lead you to believe that much differentiates the boutique hotel from its incumbents. Looming grey walls rebel against the landscape, rising high into the sky and clearly visible from the strip of road that connects San José and Cabo San Lucas. However, the hotel has gone to great lengths to introduce a number of dimensions which add up to an altogether more authentic experience, ultimately aligning with expectations of an experienced traveller.

Most obviously, it’s important to note that the large concrete building was in fact designed within Mexico by architect Javier Sánchez, based out of Mexico City. Sánchez and his firm, JSa, are known in the capital for their “urban acupuncture strategy,” using the natural world and public spaces to disrupt and regenerate urban design. Given the more private enclaves of Los Cabos’ 350-bedroom hotels, Sánchez’s strategy in Baja California is also a kind of careful poking – the hotel is intimately private in some places, while welcoming to visitors in others.

A broad entrance area fronts the building, with a guest-only pool area on the lower level. This foyer blurs into a number of drinking spots that are sunk into the building’s ground floor, with bedrooms occupying levels above. The hotel’s restaurant, The Ledge, is located beneath the reception area, while the Currents spa is located on the western-most flank of the building. The spa’s labyrinth-like layout sucks in the coastal breeze, moving it through the dark corridors of the private space.

Accommodations cover an array of sizes and configures, with suites pointing across the bay and larger villas across toward El Arco (The Arches). Mid-century Latin American interiors characterise rooms, with custom sateen-woven linens fitting into the spirit of boutique. Rain showers and freestanding copper leaf tubs make up the washing component. Villas come with extra components including private pools, snooker tables and even surf board rental, to extend the liveability of The Cape to an exceptional realm.

With their foothold on an impressive beach with a left break and adjacent waters for snorkelling and swimming, The Cape is well positioned to embrace a new Cabos crowd looking for health, wellness, and exercise during their visits to the area. It’s this group that is doing its best to break the monotonous trend of heavily set American tourists, whose first port of call might be the tequila bar located beside the taxi rank at San José International Airport, instead of the terrain and seafronts.

Athletic tourists mights look to trails the other side of the freeway from The Cape, or else use a 2km trail in its own backyard. General Manager Eduardo Segura doubles as a multi-sports enthusiast and has been training out of The Cape for years. He’ll be able to point guests towards challenging terrain and bike rental, and no doubt be able to advise ambitious athletes on the toughest routes in the neighbourhood.

A 400m running track and 25m lap pool can be found in San José del Cabo – a 12-minute drive or taxi from the property. More details on facilities for endurance athletes can be found in our guide, “Taco Training.”

Learn more about The Cape at thompsonhotels.com.