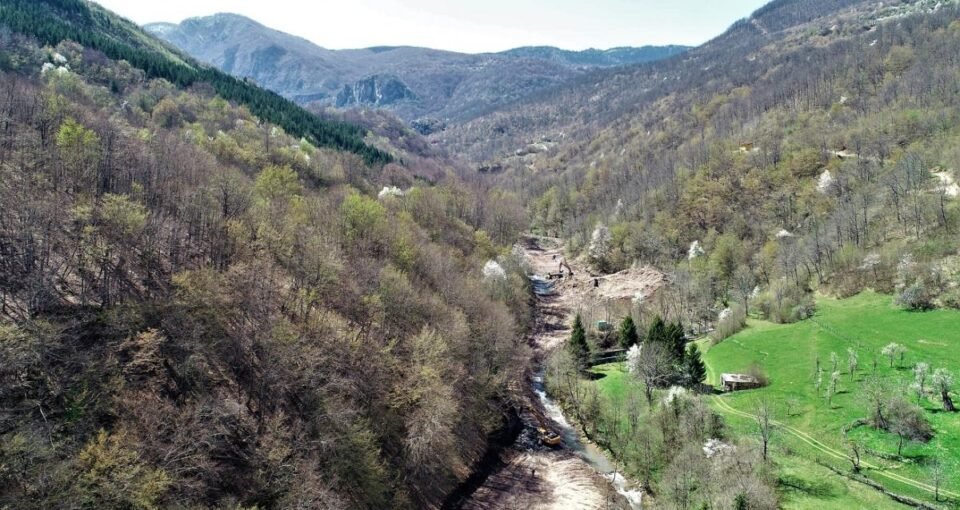 Travel restrictions imposed as a response to COVID-19 have allowed dam builders in the Balkans to continue with projects unchecked by authorities and civil opposition. Several venues have been visited since early April by wild river activists to capture signs of diggers in action without permits. Rivers in Bosnia and Herzegovina (BiH) are particularly impacted, forming a key part of the Save the Blue Heart of Europe campaign to retain the natural courses of rivers in the Balkans.

South of the capital Sarajevo, the construction of five dams has now started without receiving agreement from national bodies. The sites compromise the rivers Bjelava, Mala Bjelava, Vrhovinska, Željeznica and Prača ( view locations). These rivers remain the wildest in Europe with vibrant ecosystems, natural assets worth keeping.

Construction of a hydropower plant on the Vrhovinska river hasn’t received approval, yet work is being carried out without adhering to required degree of supervision. But under COVID-19, inspectors haven’t been able to make it to construction sites to make their tours.

Vrhovinska itself has been deemed a “fishing pond” by investors, meaning that inspectors aren’t required to make the same amount of visits. What work is being done requires the logging of pathways to build roads for the heavy machinery. At the Bjelava site, developers have been logging old trees to sell to local sawmills – the Center for Environment has filed a criminal charge to the investor.

“We see a similar approach in many places in Europe: reports from Romania tell us that the already massive illegal logging continues to increase, from the Balkans that even more protected birds are shot from the sky. The loopholes this pandemic offers to those who want to enrich themselves at the expense of nature are used unscrupulously”, says Gabriel Schwaderer, Executive Director of EuroNatur, a pan-Europe organisation that has been defending the continent’s natural places since 1987.

“These environmental crimes are being committed in the shadow of the pandemic. Investors are taking advantage of this unique opportunity to create structural facts without inconvenient inspections or protests from residents and environmental organisations. We are not talking about just any streams and rivers, but about the most unique and so far largely untouched watercourses,” says Ulrich Eichelmann of Riverwatch, coordinator of the Save the Blue Heart of Europe campaign.

In April, the Coalition for the Protection of Rivers in Bosnia-Herzegovina and the Save the Blue Heart of Europe campaign call on Prime Ministers and Presidents of Bosnia-Herzegovina to stop the dam construction and urgently impose a moratorium on the construction of small hydropower plants as well as on the granting of new concessions.

“The state of emergency should not be an excuse for the exploitation of public resources, but rather an occasion for solidarity and a sensible use of our resources,” says Redžib Skomorac of the NGO Center for Environment, Blue Heart partner in BiH.

By the end of April, local residents had begun to block illegal construction of hydropower plants in Bosnia and Herzegovina. On April 29th, a group broke curfew prevented access to construction sites where the Bjelava meets with its tributary, the Male Bjelava. Over 20 people assembled to prevent workers from reaching the construction site, eventually meaning that work was cancelled for the day and protestors could return home and adhere to curfew.

Under the protection of the Corona curfew, another three hydropower plants are currently being built in the region, on the rivers Vrhovinska, Željeznica and Prača. Another positive turnaround is taking place at Prača: the mayor of the neighbouring village Pale Bosko has now announced that he intends to prevent the construction of the projected hydroplant. As of 23rd May, it’s uncertain if this advocacy will result in actions against developers.

For more information on dams in the Balkans, head to riverwatch.eu and balkanrivers.net. Header image: Construction site on Bjelava River © Robert Oroz