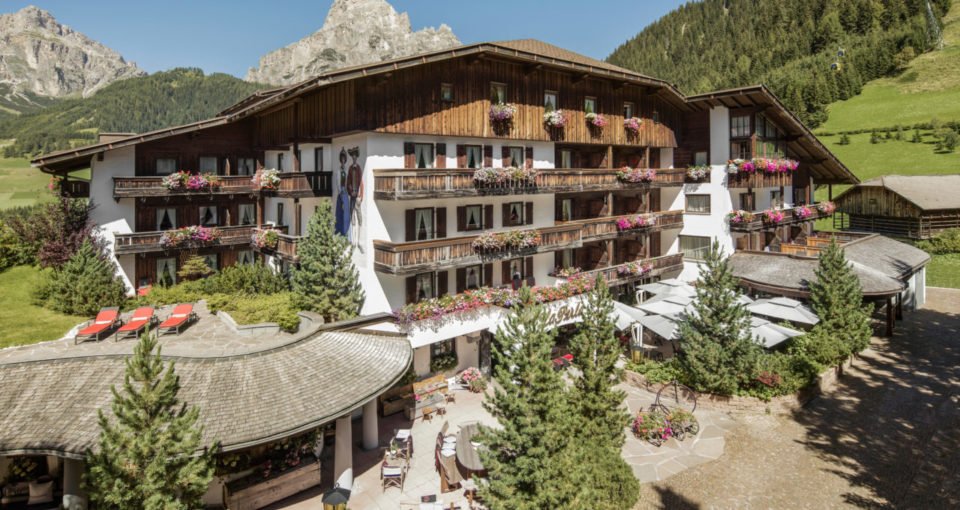 The term “bike chalet” wouldn’t have made sense 10 years ago, at least for those who picture wooden structures laden with snow, serving a role only in the winter. Surrounded by a fantastic Dolomitian backdrop, the family owned Hotel La Perla has taken on the responsibility of hosting cyclists and providing a permanent launch for those taking on the renowned Sella Ronda loop.

Leading Bike is La Perla’s in-house effort to offer world-class cycling without compromise. By partnering with Pinarello and inGamba, they’ve made themselves a pair of prestigious friends. The Dogma Pinarello Lounge fronts the hotel with a selection of vintage frames and the latest Dogma F10, available to hotel guests for rent. Meanwhile inGamba support the operational layer by guiding cyclists unfamiliar with the roads.

Perhaps Pinarello and InGamba have been convinced by La Perla’s other offering which more conveniently falls under the umbrella of hospitality. An impressively stocked “Mahatma” (“soul”) cellar contains a mere 28,000 bottles of wine, representative of hotel owners The Costa Family and their enthusiasm for entertaining. Writing on the hotel’s website, employee Francesco Ricci pens the personification of this vault, a cavity which forms the foundation for the mountains that cradle La Perla:

“I find her difficult to describe, she is not dark and mysterious as you might imagine, but for ever alive and radiant, and while to all she declares her state of mind and thoughts, to me she confides her innermost secrets. ”

Sommelier Paolo is more frank, “… if I observe that someone does not deserve the privilege [to visit the cellar], the doors down below remain firmly shut.”

If you fail to make it to the cellar, you’ll hopefully be accepted in the wellness spa, and certainly at the 180-degree bar whose welcoming angles fall within a few feet of the hotel’s entrance. Choose between Martini, Manhattan, Negroni and Whisky Sours or dine at the 1* Michelin restaurant, La Stüa de Michil, or enjoy South Tyrolean classics next the bar at La Perla’s “Bistrot” restaurant.

Finally, sleeping quarters. The hotel’s 54 rooms are divided into three categories, “Romantik” (I’m not sure this can be translated), Standard and Single. The single offering is particularly unique, and the proper form for any athlete that isn’t looking to sacrifice on sleep for intimacy.

Watching the Giro d’Italia is a teasing affair. Magnificent road surfaces and vistas fuel a deep-seated envy, swelling any faint desire to make a trip to Italy and ride its roads. Located just north of the route is the province of South Tyrol, slammed up against the Dolomites right in the heart of wine country. In recent years, South Tyrol has built up its collection of bike-friendly hotels making the region and even more hospitable place for cyclists and mountain bikers. Here are number of routes and packages to consider.

There are two peaks you’ll want to bag.

With a summit of 2758m, the Stelvio Pass is the highest slice of tarmac in the Eastern Alps. The road connects Stelvio/Stilfs to Bormio with 48 hairpin bends and an average gradient of 7.4%. Taken from Prato, the ascent is over 24km long, and from Bormio its 22km – see the Strava segment for Passo dello Stelvio.

For mountain bikers, the challenging Sella Ronda mountain bike trail tees up an outstanding route for the summer. With the help of a guide and lifts, the four peaks of the Selle Ronda is now accessible in once day, covering roughly 60km and nearly 4,000m of climbing. The Selleronda HERO is one of the continent’s hardest mountain bike races, taking place in the Dolomites on the final weekend of June. With a marathon distance of 85km/4000vm and a classic route with 60km/3,400vm, the HERO presents a mighty challenge.

If you don’t have the fitness for a long excursion, think of getting hold of a hardtail and making a route to Pralongiá Mountain Inn – sleep over or else just sample their delicious food as a stop.

La Perla’s unrelenting quality makes it a premium offering in the Dolomites, with rooms starting from €280 at hotel-laperla.it. The adjacent Berghotel Ladinia is also impeccable but lower in price, and is also stamped with Famiglia Costa care.