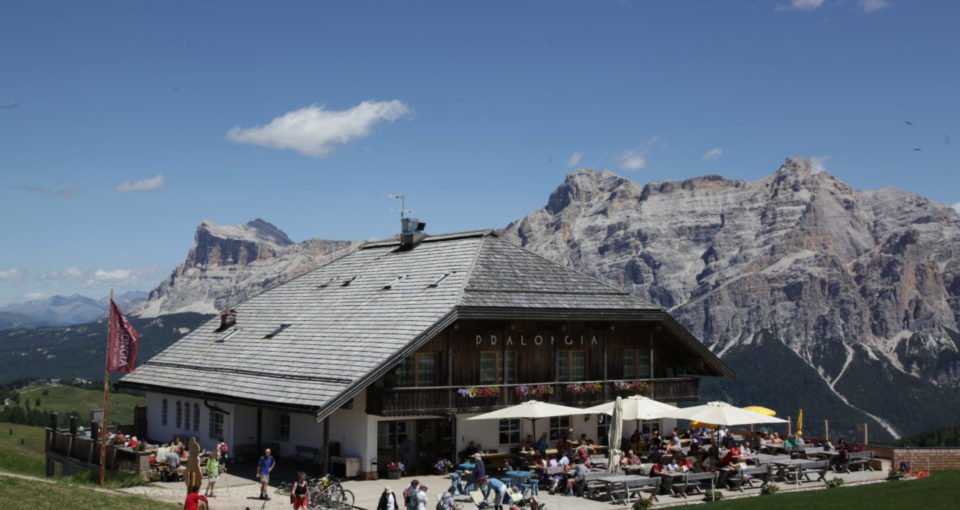 Perched up on a rounded hillside within the Italian Dolomites, Pralongiá completely exceeds by presenting the cosy quarters of accommodation alongside the wholesome offering of gourmet dining. I dropped in with my sister just after the UK’s Brexit Referendum in June 2016 and nearly thought to never leave the mountainside – there’s all you need at this mountain inn and restaurant.

Another thing to acknowledge about the defensibility of this spot is that it’s well above sea level. At 2100m, Pralongia stands well above Europe’s highest ski resorts – an ideal base for high altitude training and sleeping. As for fueling, sweet snacks punctuate the day from breakfast to dinner. Some poor soul has also lugged a load of wine to this secluded spot – true Italian hospitality.

At some point you’ll also have to venture beyond the comfortable refuge and earn your stay. In summer, there’s no shortage of rigorous trail to be had along the Alta Badia Höhenweg, a 76km route with a total vertical metreage of over 5500m, open from mid-June to late September. Pralongiá is rougly located at the midpoint of the looped route which sets out from Corvara, brilliantly detailed altabadia.org.

The Alta Badia’s Höhenweg has a basic 7-day completion time, half that of the Dolomiten Höhenweg Nr. 9, an alternative route which wraps a 180km trail along an East-West axis over the Dolomites.

Flip the thermostat down and in winter you’re in the heart of the Dolomiti Superski within Alta Badia. The area was a renowned scene of conflict during World War One with Italians and Austrians battling over what is now The Great War Ski Tour (link to map). The Independent‘s Leslie Woit set out on the route in February 2015 – viewable in the neatly titled “Ski in the Dolomites: War and Piste“.

Have a leaf through the Dolomiti Superski map (PDF), and become more familiar with your Italian wines.