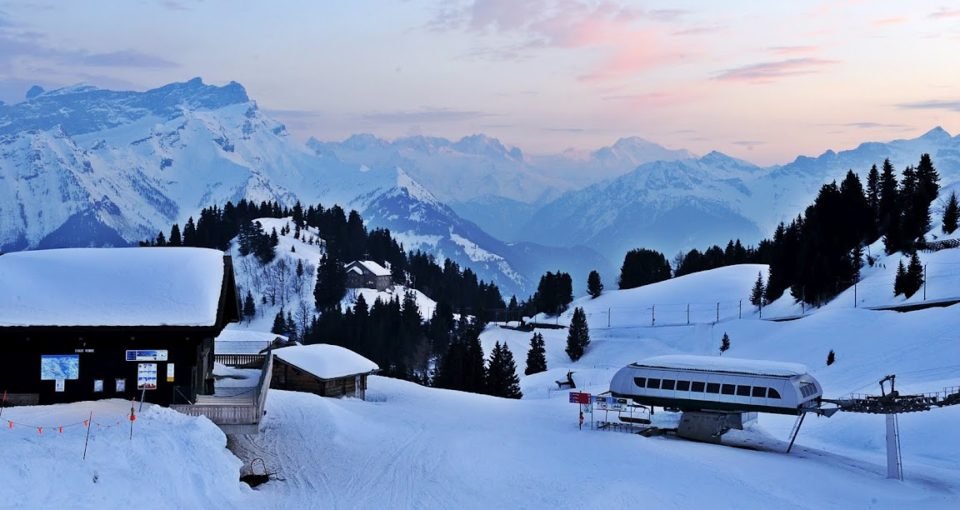 In the last days of his life, Freddie Mercury journeyed to the tranquillity of Switzerland to enjoy its beauty and peace. Yet paradoxically it was during this time that he wrote Queen’s final album Made in Heaven, a jaded record of painful significance and reckless enthusiasm. It is this concoction of splendor and energy that the Swiss Alps captures, giving the aspiring outdoorsman a haven of tranquility and adventure to explore.

One such haven is the French speaking Lake Geneva region, with the connected ski resorts of Les Diablerets and Villars nestled high in its upper most reaches. These two quite different winter strongholds currently offer a combined ski area of 125km, including a Glacier at 3000m.  However, the ski area is set to expand, as 270 million euros are being spent to link the region up with Leysin and Les Mosses, offering a whopping 225km of extra trails to carve up.

In the same way that the region is being fused together, so the vibe of the conjoined resorts is somewhat of a fusion.  The configuration of the ski area and lift infrastructure makes it suitable for families with young children, and for groups with non-skiers who want to link up with skiers at the many mountainside restaurants during the day.  This family-friendly ethos contrasts with some of the more extreme activities available, and in particular the opportunities for speed flying in the area.  Such variation in a ski area makes the Villars/Les Diablerets region a perfect escape for families and couples with a similar divergence of interests.

A small mountain town with four bars and a nightclub, Les Diablerets is a long way from the vigarous Verbier/Ibiza massive. But that is the appeal. Tucked away in the shadow of the glacier, Diablerets offers a rural escape from the hustle and bustle of the Alps’ heavy duty ski resorts.  As for the terrain, it offers a mixed assortment of slopes, catering for beginners up to experienced and on into adrenaline junkie.  For the latter few of us, Diablerets has been pioneering speed flying with the glacier a popular drop off point.  One minor hazard for off-piste skiers is the abundance of speed flying tracks that lead off the edge of cliffs… something to watch out for.

Boarders looking for other thrills can be guaranteed of smooth riding up at the Diablerets snow park, owing to year-round snow on the glacier under the shadow of “Quille du Diable” (Devil’s Skittle).  However, in the same way that an inordinate amount of time is consumed in bowling sessions waiting for balls to return from the gutter, so the Quille du Diable has its own vengeful strike; the gradual movement of the Glacier means that no heavy duty fixed lifts can operate on it, making for the longest pommel lift of your life.

Aside from the glacier, Diablerets offers a range of other winter activities, from attacking surprisingly deep snowdrifts by snowshoe (by night if you’re feeling adventurous), to sledging, cross country skiing. ice skating and curling.  And as for evening entertainment, head to MTB for some reliably good looking and inevitably taken ski instructors.

Villars is the higher of the two resorts, positioned on a natural balcony at 1300m, and is also the larger of the two with a population of over 2500.  Despite substantial development over the years, the resort has made a concerted effort to maintain the ambiance that has been created by its classic Swiss chalets and natural setting.  The vibe is relaxed and fairly upmarket, with a heavy sprinkling of four and five star hotels.  The resort is another self proclaimed family destination, with evening family friendly ski shows and all children under the age of 9 being allowed to ski for free.

Despite its traditional charm and heritage, Villars is a forward looking resort.  This is apparent from a social, environmental and commercial perspective.  From the social standpoint, Villars has grown into one of the leading disabled skiing resorts in Switzerland.  A number of companies have set up in the town, allowing para or quadriplegics to take lessons in using mono or bi-skis, as well as offering ski instruction for the mentally handicapped.  Similarly, from an environmental perspective Villars is pushing the boundaries of convention and is attempting to future proof the resort.  In anticipating and responding to climate change, it has deployed 45 new snow makers in the last couple of years along with 3km of piping leading to a mountain reservoir.  The Villars slope planners are hoping to keep the route down to the town as skiable as possible for as long as the season can last.

Future proofing is also taking place from a commercial standpoint, with the resort making a big push towards summer tourism.  Having spoken with the head of tourism for the area, it is clear that Villars realises the commercial threat of global warming, and the untapped revenue opportunity that the summer months offer.  It is therefore offering a value packed summer Freedom Package, including cheap accommodation and free access to mountain transport.

From the center of town there are two main ways to get up to slopes, via the telecabin or the BVB railway.  These both lead towards Bretaye, which is the focal point of skiing in Villars and hosts a countless number of heaving lunchtime restaurants.  From here one can head in any direction for a day’s skiing.

As for the terrain, the wide pistes of Villars are not overly challenging but make for good learning slopes, and the Villars snow park, dubbed “1984”, is set against a beautiful backdrop and is fortuitously placed in front of a bar, for those in need of liquid courage.

Les Diablerets are Villars are around 150km from Geneva and the friendliest way to travel is by train.  There is a station conveniently positioned inside the Geneva airport and it takes takes a cool hour and a half to get up to Villars or Les Diablerets.  The outlandishly large windows make for a beautiful journey.