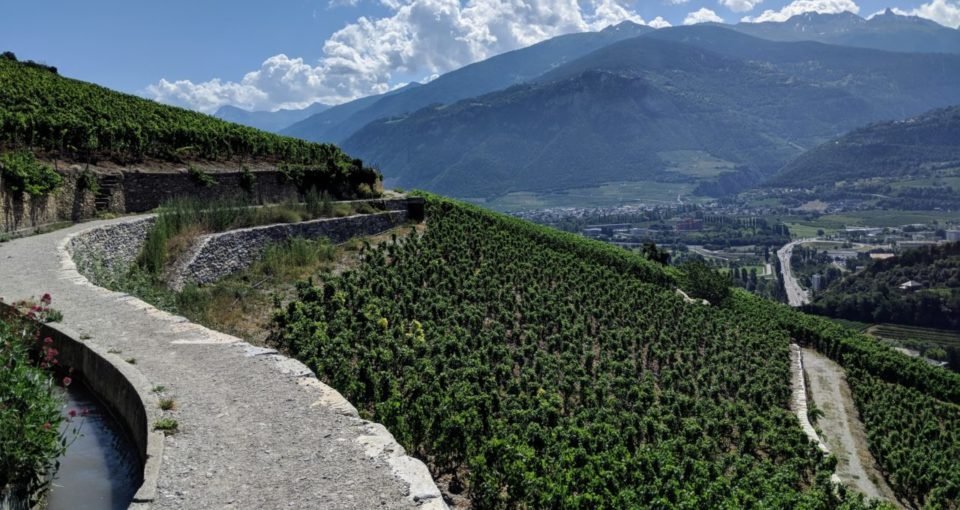 Those fearful that the world is drifting towards binary simplifications and being drained of diversity will take pleasure in the obscure wines emerging from Switzerland. The same nation that has a reputation for bottling up wealth generated by nefarious regimes has also locked up some of the world’s most unusual grapes, varietals that have been neglected by palates, worldwide, that is until recently. As a cantilever swing to the insecurity of winter tourism, Swiss wines have stepped forward, offering a robust economy and a hook to entice wine enthusiasts.

Though Switzerland may be better known for its chocolate, cheese and chronometers, the country’s western cantons have in fact been cultivating grapes for centuries. The difference between their wine industry and their Italian and French neighbours is simple – Swiss wine rarely gets out of the country, with less than 2% sold to international markets, leaving 87 million litres to be consumed domestically. Meanwhile the Swiss imported a further 162 million litres of wine in 2017, mainly from their Italy, France and Spain, suggesting that their 35% consumption of domestic wines represents a patriotic commitment.

The 21st century has witnessed a dynamic upgrade of standards in Swiss wine making, largely thanks to the more stringent rules put in place to prevent imported wine from being blended with Swiss grapes. Banned in 2006, mixing foreign and domestic wines is now scorned and the Swiss have adopted their own version of the French appellation contrôlée system. Thanks to these measures, diversity hasn’t been dampened in the 100KM stretch of land that straddles the gurgling, grey Rhône between Brig and the eastern shore of Lake Geneva. Instead, online training has been developed to educate restaurants and bar tenders about the complexity of Swiss wine, to ensure that the country’s six wine producing areas are accurately communicated.

Jump forward to 2018 and the rogue and forgotten grapes of Switzerland have been cradled in the lap of a new identity for Swiss wine. Grapes such as the Petite Arvine, Cornalin (Humagne Rouge), Humagne Blanc, Lafnetscha, Himbertscha, Rèze and the resilient Heida have set a new constellation for discerning wine consumers to navigate. These varietals received a quiet exaltation in May, when a New York Times profile by Jason Wilson commented on “Why You Should Be Drinking Weird Wines”. Wilson’s journey through Valais was enough to prompt my own travel arrangements, not least because summer travels always promise the opportunity of combining wine with mountain biking.

As Switzerland’s southernmost canton, the bilingual Valais has international borders with France and Italy, with cantons Vaud (north-west, French), Bern and Uri (north-east, each German) and Ticino (east, Italian) as federal frontiers. Vineyards start to become visible as you swing around the narrow slither that makes Lakes Geneva’s eastern end,  with plots of land asserting themselves fully by the time you arrive at Sion, which is where I started my mountain bike excursion at the beginning of July.

Valais has taken on the mantle as the primary wine producing area of the country. Viticulture is a way of life in the canton, not in a way that compares with the great châteaux across the French border, but for its altogether more grassroots structure. In Valais Vignerons du samedi are a significant troop of growers who tend to their small parcels of land on Saturdays, a group that has recently advanced with the development and consolidation of the industry.

With scores of vineyards working their way east, plotting a route isn’t hard. Cyclists just need to plan the day according to consumption and the responsible navigation of the very well marked trails. My own two-day visit was fairly swift with 38km and nearly 700m of elevation gain on the first day see (route) and a short 5km ride the following morning, roughly 200vm.

After taking the train from Geneva to Sion in the morning, I set out from Sion, skidding onto the Route des Vignobles on my hardtail mountain bike. Once you dock with the trail above the town, “Route des Vignobles” signage guides you along, usually accompanied by yellow markers which direct walkers over the capillary-like network of Swiss hiking trails. The pristine gravel trail between the vines is lined by an aqueduct, so connecting the supplies of a number of vineyards and tasting rooms – Le Cube from Cave Philippe Varone Vins is worth stopping at during your traverse east.

The elevated roof of Château de Villa was a welcoming sight by the time I’d emerged from the vineyards and arrived in the Sierre, and where I knew to grab lunch and get into the shade for an hour (photo below). A quick tour of the enoteca is enough to inform you that this is one of the canton’s more robust locations. I worked my way into a merlot from Cave du Chevalier Bayard (2016), pairing this with cheeses from the Valais (at least half a dozen) and l’entrecôte de bœuf to sustain further riding.

Alluring as the was  to continue directly to more tastings in the adjacent village of Salgesch, I was in need of a post-lunch nap and found myself slumped against the village fountain for a few minutes after arriving in the desolate settlement. Revitalised, I was able to swing by Cave du Rhodan which was entertaining a full house, while the more subdued Domaines Chevaliers offered a cool retreat for the mid-afternoon and another tasting.

From Salgesch, I took the low road when I should have taken the high road to Leuk (Swiss-German) / Loèche (French), making up for my error when I arrived in the town and had to climb up some 10-12% grade to get to Vin d’oeuvre, a winery run by Isabella and Stéphane Kellenberger (photo below). Their wines include the regular inventory of grapes from the area, with each wine accompanied by a short caption, an accessible entry point. The Johannisberg’s liberal “anywhere anytime” caption suited, as did the double-bill of the Humagne Blanc (“born to be wise”) and Humagne Rouge (“born to be wild”), carefully poured by Isabella.

Vin d’oeuvre marked the end of my first day of tasting. The following morning, I got back in the saddle and cycled what must be one of the most engineered parts of the entire country. Wines hike up the mountain over dozens of tiers, mirroring the vertiginous layout of rice paddy fields in South-East Asia. Meanwhile their roots drive into the ground in the direction of the new 4230m-long Eyholz Tunnel, Switzerland’s newest major underground roadway that connects the A9 near Brig with the route leading up-valley out of Visp.

By 10:30am and some gentle climbing on another hardtail, I arrive at my destination and next wine venue, St-Jodernkellerei, impressively clad in solar to further harness the sun, already generous in gifting the vineyards with the unlikely privilege of grape growing at 1100m above sea level. By 11am I have sampled their Heida Visperteminen, Pinot Noir and purchased the Prim Evec, heavily wrapped in bubble wrap for my jersey pocket and descent – the surest way to show enthusiasm for Swiss wines.

My tour didn’t allow time to explore vineyards to the west of Sion. Had I had more time, I would overnight at Bains de Saillon and continue with more tastings in the village. Then the following day I would try the biodynamic wines at Marie-Thérèse Chappaz.

Serious road cyclists might look into Cyclosportive des Vins de Valais, an annual event with three grades of routes that wind through wine country. Routes start with a 98km / 1470vm version, continuing through 130km / 1920vm with 138km / 2’350m being the greatest challenge. An additional highlight for road cyclists is the Col du Sanetsch (2242m), reached by a road climbing 1692m over 24.6km to a dead end, rated as one of the best road cycling climbs in the country.

If you want to extend your stay in Switzerland but also get up to some alpine activities, head up the valley to Zermatt where you can both continue to mountain bike and find good restaurants and wine. The mountain village has done its fair share to introduce its international visitors to Swiss wines, with most restaurants showing a good spread from local producers. Highlights included Zum See, which is on the mountain and perfectly accompanied by a Heida aperitif at Gitz-Gädi, a restaurant linked to the reputed Silvana Mountain Hotel.  Within the village, staging an entrance at The Omnia to sample its bar is another option, but you’ll also find good wine at street level at 1818.

Book your carbon road bike or mountain bike with Ciclissimo in Sion, and for more information of wine, visit lesvinsduvalais.ch.