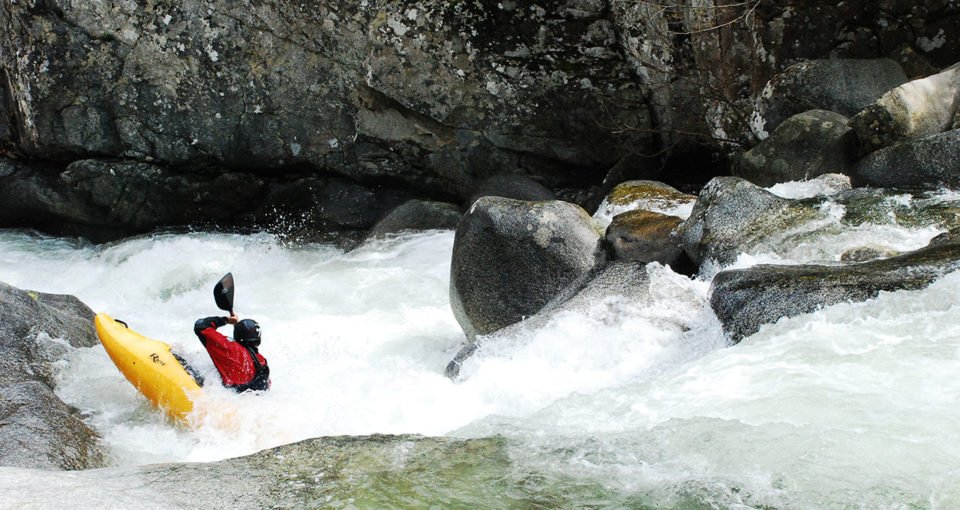 The French island of Corsica is located in the Mediterranean Sea off the south coast of France just north of the island of Sardinia. Famed for being the birth place of Napoleon Bonaparte, it is know to those seeking adventure as the most mountainous island in the Mediterranean. Home to the north-south, 170km GR20 walking trail, described by the outdoor writer Paddy Dillon as “one of the top trails in the world”. It is also a popular summer destination for tourists seeking pristine white beaches and soaring temperatures.

However the main attraction for our group were the countless white water gems nestled in the mountains that dominate Corsica’s landscape. Corsica’s rivers offer crystal clear waters, often in brilliant sunshine. The difficulties range from medium volume grade III to full on low volume grade V. The rivers are also much longer and continuous than in other paddling destinations, meaning it is not uncommon to be on a river for 4 or 5 hours at a time. The rapids are characterised by large boulder gardens often containing dangerous siphons and undercuts which prompt a physical and mental challenge.

For an experienced kayaker Corsica offers an exciting and rewarding set of whitewater puzzles in stunning scenery. Due to the southerly location the snowmelt appears and disappears earlier than in the rest of Europe and the season usually runs from mid to late March to late April, depending on the amount of snow and the pace of the melt. This makes Corsica a popular Easter getaway for many of Europe’s kayakers. Kayak Session magazine run a kayak festival, based on the banks of the Tavignano every year. The festival provides a great way to meet kayakers from around the globe and get information on which rivers to run. Kayak Session magazine also produced a video guide which is very useful for planning which rivers to paddle. A word of warning, the rivers are harder than they look!

Accommodation usually comes in the form of camping – the festival is based at Camping Ernella which is €5 pppn with some rooms available and all the usual facilities. Wild camping is legal in Corsica although you aren’t supposed to set up before 8.00 pm and camp is supposed to be taken down before 8.00 am. Many of the rivers have useful wild camping spots at the get off and surrounding areas. The Middle Vecchio has a particularly good camp spot 100 meters up from the take off. Most of the time cooking on camp stoves and buying food from supermarkets is easy (although not on a Sunday). Corsica also has many small towns full of restaurants and cafe’s which are renowned for their excellent sea food.

It is possible to fly to Bastia in the north of Corsica and hire a car. It is however an expensive option and flights are infrequent due to the kayaking season being before the main tourist season. A more practical option is to drive and take the ferry. Expect to pay around €200 in tolls across France, the crossing at Dover is often cheaper if you opt to go via Dunkerque and costs around £60-100 each way. The ferry from Nice to Bastia takes about 5 hours and costs about €100 each way, it is however a very nice ferry. With petrol, insurance, ferries, tolls, food and some alcohol we managed a 10 day stay on the island for less than £500 each for a group of 4 in one car. To keep the costs down it is a good idea to add a couple of extra hours to the drive across France and drive at 60 instead of 80 mph. We were in a rush on the way home and it cost us around €80 more in fuel than the journey down had.

If you’re not planning on taking your own kayaks and going with guide, check the Greentraveller journey plan for a trains to Nice.