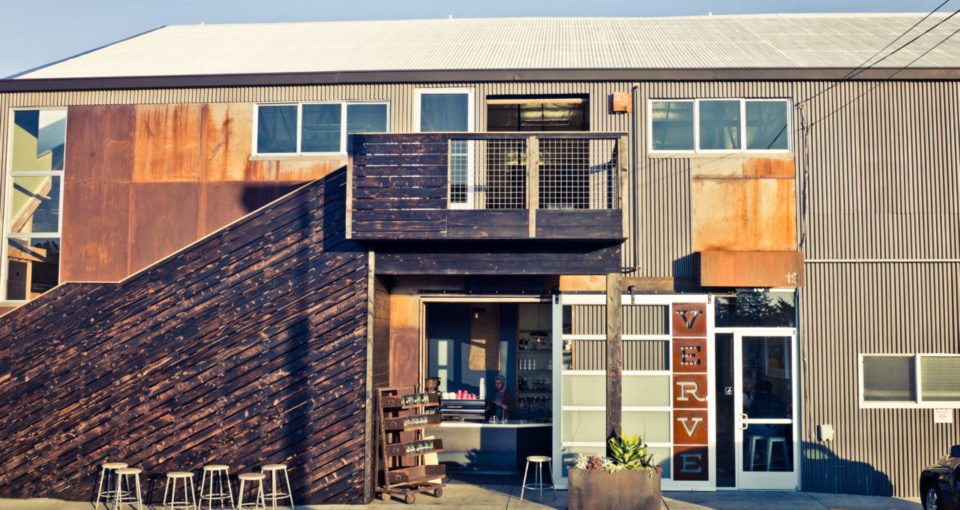 Despite its proximity to Silicon Valley, Santa Cruz remains a relaxed enclave of Northern California, oozing cool on many levels. From surfing to mountain biking, Santa Cruz is world class, while retaining a local charm that many associate with a rose-tinted version of West Coast living.

Part of its world class offering comes in the form of Verve Coffee Roasters, a formidable company which has blossomed in this corner of the coffee world's third wave renaissance. An international venue at Tokyo's Shibuya train station is matched across the Pacific by two domestic satellite cafes in San Francisco's Castro District and Los Angeles' Arts District.

But the impressive coverage of Verve in the relatively small town of Santa Cruz is a more remarkable real estate play. The company has invested in four venues across the town, catering for each side of the Westside v. Eastside Santa Cruz schism. Each venue has its own splendid interior, with different themes blending with the mixed geometry of the space.

What's more, each venue is surrouned by healthy distractions, as if Verve's Santa Cruz constellation has provided the caffeinated inspiration for businesses of a similar ilk. I commuted between the four venues for two months during March and April 2017 and credit much of my glowing view of Santa Cruz to these shuffles. Here's a 17km routing and what I consider to be the natural tour of all four.

Verve's Pacific Avenue might be your natural starting  point, located in Santa Cruz's downtown with frontage on Front Street and Pacific Avenue, the main high street. The venue's vaulted ceiling and angeled exterior walls make for a spacious room, with a small outdoors seating area in a leafy spot on Pacific Avenue. In reality, this venue is on par with coffee spots from competitors, though is exceeded in intimacy by Verve's three other Santa Cruz addresses.

As you would image, Pacific Avenue has plenty of surf stores, and also two oustanding bookstores where you can grab some reading for the day ahead – Bookshop Santa Cruz and LOGOS.

The next venue to check into is in Santa Cruz's Westside, found among a cluster of warehouse-like buildings that house the town's foremost gastronomic scene. The L-shaped venue is adorable, with a pair of shared benches and wallside seating, frequently occupied by the most discerning students from University of California, Santa Cruz (its campus is in the woods on the hill above town). Additionally, a low-slung sofa lines one side of the space, while an impressive outdoor seating area has been built with a 4-ft external wall to protect a dozen loungers from the sea breeze.

Beyond seating, Verve Westside stands out for its quartet-capacity vertical bike rack and a wonderful, marine-themed lighting fixture that hangs over the shared benches. All these treats can have you hanging around Verve for quite some time, totally fine considering the impressive restrooms where the sound system carries through and a selection of bespoke furnishings find their home.

Make the most of your visit to this gastronomic quarter by grabbing baked goods at Companion Bakeshop and, if you're up to it, beers at Humble Sea Brewing, opened in 2017. When visiting Humble Sea, make sure to look on at their building from the railway tracks – an impressive mural is anything but "humble". Also, note that the prestigous Santa Cruz Bicycles have a factory store half a mile away and rent out their demo fleet.

From Westside, make your way along the cliffs, past the boardwalk and over to Seabright (if you're on foot or on a bike, opt for the railyway bridge to cross the tidal San Lorenzo River). This location on Bronson Street is Verve's actual headquarters, where all the roasting happens and where you can also grab a coffee in the tiny kiosk-like cafe.

To get to the final venue and termination point of this tour, head over the lagoon and along East Cliff. You're now over in Santa Cruz's Eastside where a different surf break means you'll find a different breed of locals. Fear not though, Verve's 41st Avenue venue maintains the same quality as its Westward cousins, made complete by a lounging area on the pavement which mirrors the style of the Westside venue's seating area, yet with full-supine possibilities.

This end point is apt – by this stage of the tour, Verve's constellation will have provided you with enough stimulation to contemplate life on this wooden promontory, and maybe also take a mid-afternoon nap surrounded by soothing seaside vibrations.