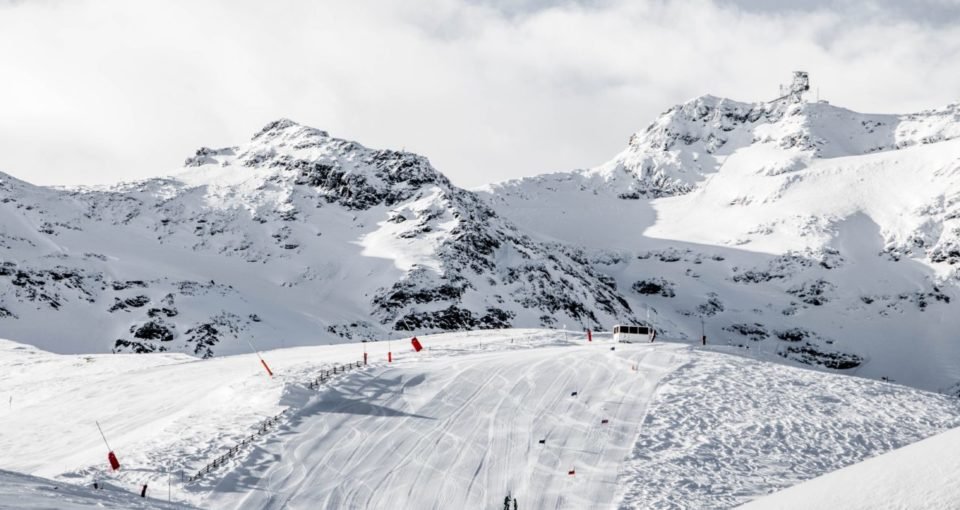 Val Thorens, France: the pinnacle of Alpine ski resorts, sitting at a healthy 2300m as the highest base in Europe. VT is part of the Les Trois Vallées and as le plus grande domain skiable du monde (the largest linked ski area in the world), the resort accompanies Courcheval and Meribel as one of the mighty titans of Europe. Ultimately, the area wrapping over Les Trois Vallées is so vast that you would struggle to ski the entire area over a week-long stay. Whilst the whole area is stunning and guaranteed to provide tonnes of enjoyment for any kind of skier or snowboarder, I shall focus on Val Thorens, a resort I know well from five months skiing there during the 2008/9 season.

The first thing to note about VT is altitude. At 2km there is guaranteed snow, and it will not rain in the early or late season, a major positive given that the neighbouring village of Meribel is significantly lower and wetter. On the downside the resort is too high for trees to flourish, leaving the mountains looking a bare and rocky. The lack of trees also means that the mountain can become windswept, limiting the lifelength of  floaty powder. Yet for any keen woodsmen, Courchevel and its tree-dodging runs are only a few lifts away if you invest in the full 3-Valley pass.

If it is busy and you are trying to beat the peak time queues, one of the best places to ski is over in the fourth ‘secret’ valley – Orelle. This valley is included in the VT lift pass and is smaller than the rest, only featuring two slightly older chairs. The best way to get there is to power down through the centre of town and straight to the chair called Moutiere. At the top of Moutiere, hop off to the right and get on the large Gondola Grand Fond.

If it is early in the morning and not too busy, the run down to the bottom of Orelle can be done at incredible speeds. On a powder day, Orelle can be one of the best places to ski in the Three Valleys, and since it gets less traffic you are more likely to find that perfect untouched stash. Take the two chairs to the top of Bouchet, but keep an eye over to the far right as this is the only area that is possible to come down.

At the tope of Bouchet you have two choices: either you can start off on the pisted Coraia run and push hard skier’s left (keep as much height and as far to the left as possible) to cruise through a couple of little bowls and then a big face visible from the chair. Or you can hop over the rope at the top, take into account the ‘if you go past here, you’re not getting rescued’ warning and onto the Glacier du Bouchet.

On the Glacier  you can go down a number of ways – don’t charge too fast if you don’t know where you’re going as there are some small cliff faces that can hurt if you fall down them. One way to go (that is less known and therefore less tracked) is to take a left as soon as you’re past the rope and keep left, if you’re high enough you should find yourself on a good fun face. If you miss the face, you’ll simply head down a little couloir and join the same face at a later stage. Either way, you’re going to have a long run without a chair in sight for a good time, and be able to get that feeling of just having you, your friends, and the mountain.

Other easily accessible powder spots around The Three Valleys are off the top of Lac Noir down in Les Menuires – you go right off the chair and follow in inevitable tracks. Another is off the top of Mont du Vallon near Mottaret – go out to the left just before the two pistes fork. Needless to say, any off-pisting should be done at your own discretion, with adequate avalanche training and equipment.

Val Thorens is not as geared for beginners as Courchevel, but it is still perfectly sufficient. Thanks to the addition of a covered magic carpet, ski novices are provided with a shield from the elements to ensure rapid progress. My favourite blue VT run is Moraine – excellent for a warm up and almost always groomed enough to allow for some long carving turns.

For anyone who looks like they might be more at home in South Central Los Angeles and out for steeze, VT has an impressive park set up that varies quite regularly. I class the two biggest jumps as ‘house’ and ‘mansion’ sizes, both structures that I avoid. There’s a wide selection of rails, boxes, and features to jib off until your heart’s content. The only thing VT misses is a pipe due to a lack of pipe cutter but fear not, there’s normally a couple built in the nearby Meribel valley.

Like its neighbours, Val Thorens has a strong selection of hotels that pack out in the winter season. Hotel Le Val Thorens makes for a sound base, with chalet-style interiors in its 83 bedrooms, spacious communal areas and a ski-in-ski-out claim. Despite its position among the ranks of design hotels, the hotel’s in-season pricing isn’t horrible, but still harder to justify for solo travellers. A restaurant and spa area have found space in the hotel, so find yourself fully catered for after long days on the mountain.

Hotel enthusiasts will appreciate the property’s standing in Les Hôtels d’en Haut, a group of rural hotels in southern France, owned and operated by Perseus.

For general information on the resort, head to valthorens.com.