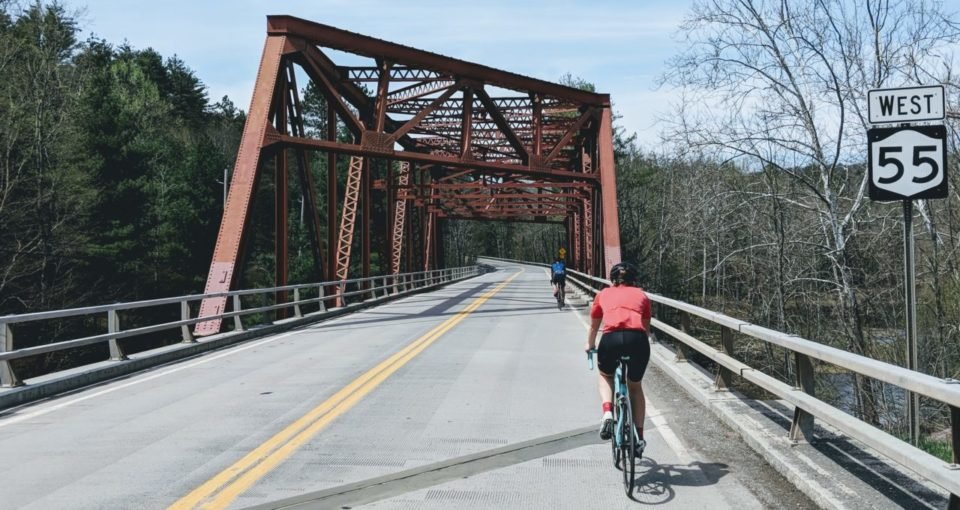 Weaving out of Manhattan on a Friday evening is a fine art, especially if you’re trying to shake off other vehicles from your bumper as you ascend for solace in the Catskill Mountains. Despite being less than 100 road miles from Times Square, the Catskills remain one of the best kept secrets on the East Coast, and an opportunity for road cyclists looking for climbing on quiet roads. This is where two New Yorkers, Russell Gonzales and Paul Livornese, have set up their guided cycling business, Catskills Collective. A renovated four-bedroom cabin acts as the base where the pair can leverage their interest in cooking and, as it become clear during the weekend, homemade cocktails.

Weekends with the Catskills Collective start with pickup in SoHo late on Friday afternoon, typically in the area of Rapha on Prince Street. Guests are whisked up to the cabin and directed to a local restaurant for dinner around 8 to 8:30pm – in our case, Silvia, found in the liberal, one-street town of Woodstock. This presented the first opportunity for the group of six guests to meet each other, gauge ability and establish the athletic mood for the weekend, while enjoying local beers, German Pinot and a range of delicious yet caloric dished (go, bibimbap).

While weekends with the Catskills Collective have a clear focus around riding decent road bikes in good terrain, the challenge of the Saturday route is malleable. A more demanding group might aim for something greater than 70 miles, but there are meaningful routes that can be shortened to less than 50 miles. Paul and Russell are both able to guide and ride hard, allowing for a split in the group and the accommodation of all recreational or serious training plans. When the entire group’s ability is roughly comparable, then decision is simple – ride as a pack of seven to ten riders and hug the curb when the occasional car overtakes.

After a solid breakfast, upheld by a stack of blueberry + banana pancakes, and the grabbing of a handful of nutrition products carefully presented by the hosts, we were off on our 65-mile loop with the sun promising full glare throughout the day. We omitted any lengthy climbs, instead choosing main and auxiliary roads that wound over undulating terrain, contributing a modest 950vm of elevation gain during the ride. The promise of coffee at the end of the ride was enough to convince riders to continue, and a welcome break for lunch at Peter’s Market in the shadow the Eastern Correctional Facility provided an opportunity to obey the laws of fuelling by grabbing some solid food and a reload of water.

The raw layout of the Catskills makes it less accessible to major road traffic, matched in by the scarcity of major settlement on its fringe. Place names like “Lackawack”, “Kyserike” and “Saint Josen” point to the mixed heritage of the Catskills, which still feel set aside from the drivetrain of industrial New York and the Hudson Valley. As an example of the diversity of the route, the tiny settlement of Sundown was home to a small store with all the necessary supplies (above), just downhill from the main climb of the day, a 6-mile stretch via Peekamoose along Rondout Creek, still sheltering snow from the winter. For anyone interested in early American vernacular, a weekend riding in the Catskills provides an insightful tour.

Worn from the ride and ready for refreshments, the group packed into the van to visit Woodstock Brewing, a new brewery that promised tapped draft and a welcome to salty lycra. After a couple of drinks each, we bundled back into the vehicle like giddy school children, our bikes taken care for and the promise of continued refreshments back at the cabin (it was Cinco de Mayo). Russell and Paul cooked up a feast, with a ladle provided for margaritas and options for vegetarians. A full Saturday indeed.

Sunday offered an opportunity for another large breakfast, this time the option of three frittatas, and a recovery ride of no more than 25 miles. We were back on the road back to Manhattan by 3pm, with fulfilled guests falling asleep on each other’s shoulders. The Catskill Collective certainly have a model for cyclists interested in rounded weekend’s road biking near to New York. I look forward to returning for another spin in Fall, subject to their secret being bottled up until then.