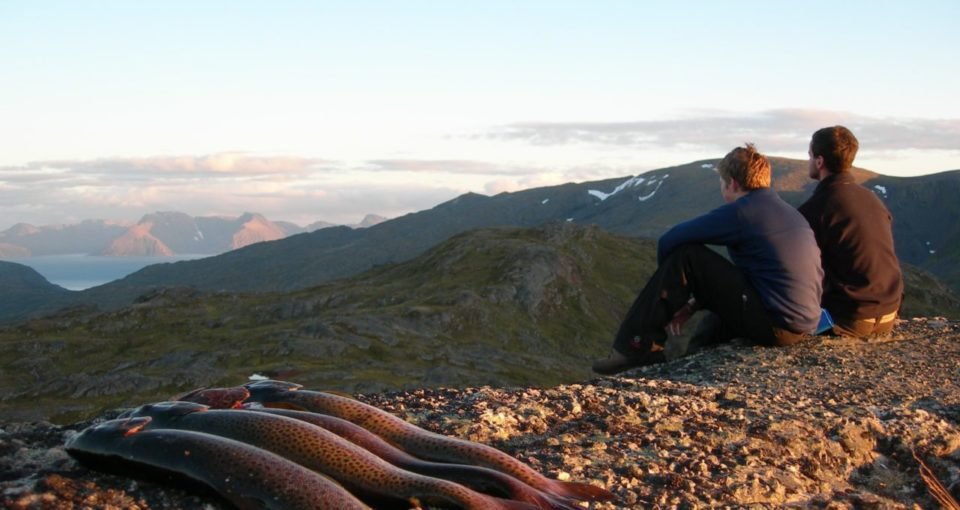 At the end of August/early September 2010 three intrepid explorers set-off for the Norwegian arctic. Kitted out in hiking boots, fishing rod tubes and fully laden expedition backpacks we navigated through the holiday crowds, receiving a few curious looks from members of the public as we explained why we were carrying 8kg of extra strong cheddar to the mystic island of Sørøya, far north in the Norwegian Arctic.

During our trout fishing trip to Sørøya we planned to spend 2 weeks hiking, fishing and sea-kayaking. In this report I am going to concentrate on the fantastic fishing available on the island on Sørøya. Josh Macfarlane has written a report focusing on the trekking opportunities on Sørøya to complement this blog.

So why Sørøya? When planning this trip with Josh we wanted to experience remote wilderness with fantastic hiking and fishing. Having already travelled to northern Norway a number of times, I had heard of and read about the Finnmark region but never visited it. Finnmark’s a big place so we had to narrow down where in the vast region we wanted to go, eventually narrowing down to the northern island of Sørøya and the large mountain plateau know as the Finnmarksvidda. The Finnmarksvidda is a huge mountain plateau with numerous lakes harbouring Arctic Char and huge Brown Trout, however in the relatively short amount of time we had (2 weeks) we felt it would be hard to properly get to grips with this enormous area without local knowledge. So Sørøya it was.

Very little information could be found on the internet about fishing here, in fact hardly any at all. However after stumbling one article in a Norwegian hunting and fishing magazine that spoke about the incredible sea fishing around the island. We therefore decided to add a 5 day sea-kayaking element to the end of our trip in order to sample some of the great sea fishing for species such as cod, halibut, redfish, haddock and wolf-fish.

Upon arriving on the island we meet up with Örnulf Jacobsen who would act as our guide and source of information for fishing on the island. We had also arranged to rent sea-kayaks from Örnulf after hiking in the mountainous inland region of the island for the first 8 days. We spent a pleasant morning pouring over maps with Örnulf discussing which routes and lakes to fish for the legendary Sørøyan brown trout. News of a monstrous 8.2kg trout being caught in one of the small lakes earlier in the season built the excitement even more. After arranging a pick-up further inland in 8 days time Örnulf dropped us off and we were finally alone in the wilds of Sørøya.

The sun was shining as we headed inland away from the only road traversing the island through heather and arctic willow. Blue skies made for great hiking weather but were not going to be helpful fishing for the finicky trout and char which inhabit the islands 1200 ponds and lakes.

The first evening was spent watching trout rise sporadically around the lake as the sun turned the whole landscape red was fantastic. Unfortunately small March Brown dry flies that were my banker in Børgefjell did not get as much as a sniff, neither did Black Gnats or Royal Wulff. Frustratingly I changed to a spinning rod and after 45 minutes hooked and lost a lovely little ½ kg trout as it jumped 4ft out of the lake. Dejected I returned to camp to find that neither Josh nor Ed had had any luck either. So that first night we feasted on mushrooms we had collected and some rice we had brought from home.

Over the next few days we camped and stayed in huts in the mountains as fishing improved day by day. On the second day we caught a number of small 8 inch trout in a crystal clear lake, falling to size 0 and 1 Mepps and small dry flies. The sun and brilliant weather stayed with us making fishing hard for our time in the hill. We did fish the lake which had produced the 8.2kg fish and a reputation for large trout. However after 4 hours of flogging the relatively small lake with every fly and lure in our boxes we gave up for another lake which we thought would host better fish in the late summer sun. Many waters offered nothing during the day but in the last 30 minutes of light the trout would begin slamming our size 1 and 2 mepps spinners. Most fish caught were around 200-500g size, although we returned the majority of our catch, these bright red-fleshed wild trout made superb eating and were a very welcome supplement our meagre rations.

My main goal whilst on Sørøya was to catch a wild Norwegian arctic brown trout over 1kg, an aim that had eluded me after 3 weeks of tough fishing in Børgefjell National Park. However I felt sure Sørøya was the place where this could happen, on the penultimate day in the mountains my biggest catch was 650g which, although it was excellent eating-size, still wasn’t  over the magical 1kg mark. On my last evening I set-off to the lake below the hut we were staying in, it was another magical light with the low setting sun turning the tundra landscape from red to purple. I was fishing a size 2 gold mepps spinner which was the lure of the trip, banking almost 80% of trout caught. I had brought 4 of these spinners at the start of the trip but Josh and Ed had done a fantastic job of losing them in the shallow lakes, so I was down to my last one.

During my third cast into the mirror calm lake, a large silver trout followed my lure and then darted back into the depths. The fish was easily over a kilo and set my heart racing. Yet no matter how many casts followed there was no take or glimpse of the fish again. Fishing around the lake I spotted a couple trout rising in the shallows, so without my fly rod I cast the lure to the feeding trout, feeling an agressive take on the second cast. After a strong fight I beached a beautiful 820g trout, the biggest trout I had caught all summer. After an hour of fishing different lures I gave up and with a fish for dinner set off to join Josh and Ed on top of a hill and watch the sun set over the northern Norwegian coast.

After eight days fishing in the mountains we heading out to the sea fishing part of the trip. Although the dream of catching the illusive 1kg+ trout in the Norwegian Arctic still lives on, I will no doubt be returning to Sørøya soon.

Although remote, Norway’s excellent public transport network does reach as far north as Sørøya.  From Alta Airport we bought a student bus ticket to Øksfjord, from where we caught a ferry to Hasvik on the island of Sørøya. Overall if done efficiently the journey can be done door-to-door in 12 hours. Total travel costs came to £260 including trains to Gatwick, flights to Alta, bus and ferry.