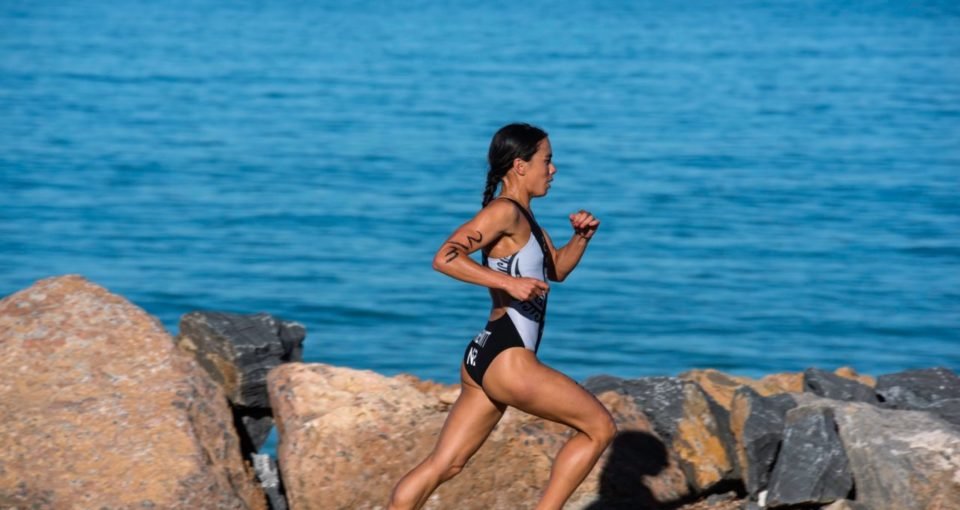 The small band of international professional triathletes are a dynamic group, moving around the world in a year-round cycle of training and racing. Europe is a summer base for many, including Olympian Andrea Hewitt who often finds herself on podiums many miles from her hometown in Christchurch, New Zealand.

After wrapping up 2017 with the invitation-only, #paininparadise Island House Triathlon, 2018 has started well for Hewitt, with a recent victory by one second at the Adelaide Oceania Cup. Winning Sprint Olympic triathlons by such a close margin is hardly a regular thing in either male or female categories, but finishing well is becoming Hewitt’s signature trait – see this clip from another sprint finish against Brit Jodie Stimpson in Abu Dhabi last year.

Below are some training notes from the Kiwi, highlighting the pillars of a time-tested regime in elite triathlon.

Where do you usually train?
Christchurch, New Zealand, my hometown. Over the summer I spent a lot of time training at my French club in Poissy, France.

How important is location for your training for access to terrain or facilities?
For me, it is important to keep away from lots of traffic on the bike and to run on soft surfaces. I mostly ride up the Port Hills in Christchurch and run on trails, in the forest or on the beach.

What does a typical week look like when you’re at your home base?
Each year has differed. This year I have been training six days each week, averaging 30 hours of five swims, six bike rides and seven runs.

What kind of training do you do when you’re short of time?
I join sessions together to fit all my training in the time I have.

Do you mainly train alone or with other people or groups?
Currently I am training with three French triathletes in Christchurch, Anthony Pujades, Pierre Le Corre and Alexia Bailly. We ride one big bunch ride and one group run each week and we always swim with my swim coach, Roly.

How does your winter training differ from your summer training?
I don’t have much of a winter actually. In the NZ summer I try to stick to a routine of having Fridays off training, a long ride on the weekend and all three disciplines the other days. In race season, it’s impossible to train as much with all the traveling.

How has your training evolved in the course of your career?
I have changed my training every year. I began triathlon as a swimmer and I learnt to ride. Now swimming is my weakness and running has become my strongest discipline, so I can concentrate pretty evenly across all three sports.

How important is nutrition for you?
Nutrition is important for recovery, to be able to keep going throughout the day to get through every session. I try to eat around my training, and to eat a balanced diet.

What are your nutrition secrets, recipes or snacks that everyone should think about using?
There are no secrets. Eat a variety of foods and balanced meals. I do believe that it is very important to drink water regularly throughout the day.

What other parts of your work are important for your career, but aren’t specifically to do with training? What is important “behind-the-scenes” work?
It is important to be relaxed and happy, to find something else to do and think about when you’re not out training.

If you weren’t a professional athlete, what would you be doing?
I would probably be working in an office as I completed an Economics degree at University before I became a triathlete.