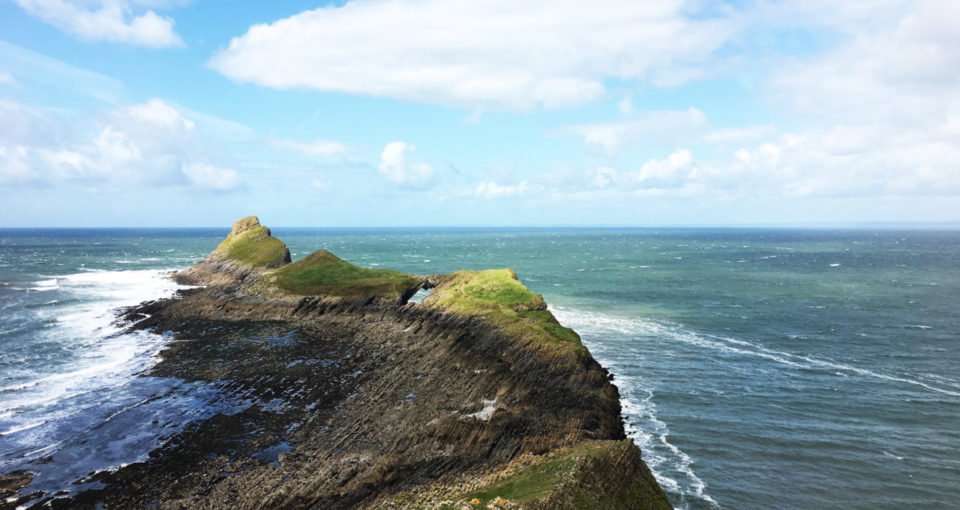 Known for its surf and its dramatic geography, Rhossili Bay on the western shore of Gower Peninsula is held up by a menacing cheese cutter of a coastline. Originally named by Viking invaders as “Wurm” (dragon), Worm’s Head leaps out of the water, connected to the mainland by a jagged causeway. The dynamic terrain and perilous crossing makes for a thrilling run, only possible during a 5-hour window around low tide. Here’s a 15km route that builds in a modest vertical gain of 400m.

Hillend Camping Park is the start point of this route, with daily parking available for £3.50, a cafe and a small store for supplies. The entrance to the footpath onto Rhossili Down is at the entrance of the carpark – either head straight up the hill from there, or wind your way clockwise along the stone wall to take on the natural ridgeline. There was no discernable path along the ridgeline during my outing, but you can find an avenue to run between the clump of fern.

You’ll find a worn path within a mile of the ridgeline’s base, so trust your feet and keep your eyes on the shore below so you can cut down into the village of Rhossili. Rhossili is the gateway to the National Trust-sanctioned area, Rhossili and South Gower Coast, of which Worm’s Head is the signature attraction. As you wind down the clear path to the headland, prepare your gait for some fast footwork on the causeway to the higher ground that forms the inner portion of Worm’s Head.

Just before your descend onto the causeway, you’ll see a small hut housing the National Coastwatch Station and near to this a sign indicating the hours when safe crossings are possible. You have two and a half hours before and after low tide to make the crossing, a window that Welsh poet Dylan Thomas failed to abide by when he once became trapped on Worm’s Head during high tide. He later remarked, “I stayed on that Worm from dusk to midnight, sitting on that top grass, frightened to go further in because of the rats and because of things I am ashamed to be frightened of.” Be prepared.

Another point of safety is to note the requirement of sturdy footwear. The jagged rocks that make up the causeway another rocky segment, “Devil’s Bridge”, are perilous and best taken with precise footwork. Make sure your shoes have a durable gait and a stiff sole – I wore my Salomon S/Lab Sense 6 (SG) shoes which wrapped themselves on the causeway admirably, though most walkers were wearing ankle-high walking shoes.

As well as timing your trail run with the tides, you’ll need to check the breeding season for seabirds that nest on Worm’s Head, if you want to make it right to the end of the headland (the Outer Head). For 2017, this meant the final patch of the headland was inaccessible from May until mid-August, along for herring gulls, guillemots, razorbill and kittiwakes to nest undisturbed.

Towards the end point of this route, you can at least observe Worm’s Head Cave and a mighty Blow Hole that’s blasted out part of the north side of the headland. Use the bellows to blow your way back along the causeway and keep to the lower path along Rhossili Bay as you close the loop with a flat shuffle to Hillend.

See my route on Strava.