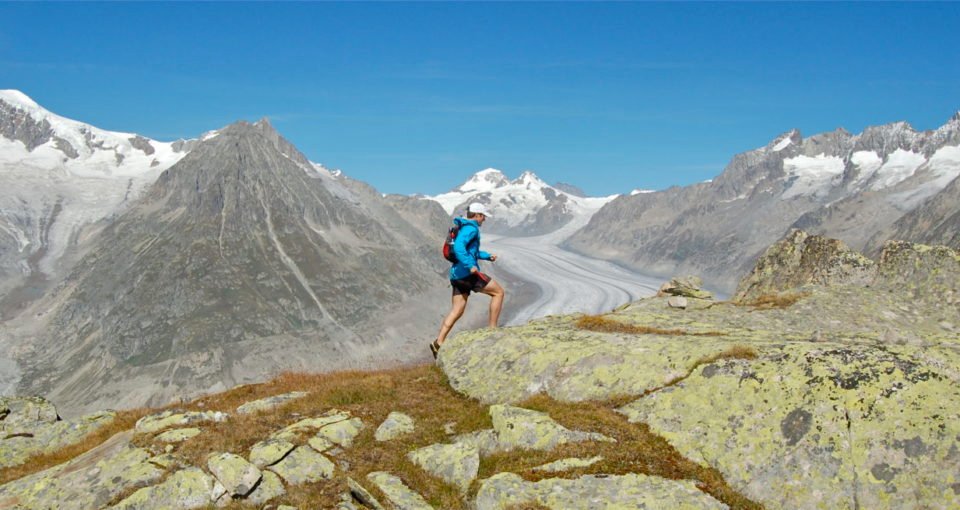 Carving a sharp line between the Swiss cantons of Berne and Valais, the Aletsch Glacier is the largest ice fall in the European Alps, formed in the drainage basin of several mighty Bernese mountains. To the north Jungfrau and Mönch hold up peaks of 4158m and 4107 respectively, while Gross Fiescherhorn and Gross Wannenhorn lie to the east, opposed by Aletschorn at 4195m to the West. This mighty geography, which also opens outstanding vistas to Switzerland’s southern mountains, is absolutely prime territory for some rigorous hiking or trail running skirmishes.

Riederalp is just one mile from the start point of the Aletsch Half Marathon, a trail running race that routes up and over the glacier’s drainage basin. The 21km route included over 1000m of vertical climbing, taking competitors to peaks nearing 2800m. The route is well tested – on 28th June the event will run its 30th edition – so look to navigate or compete on this route when you’re in town.

If you’re looking for somewhere to set up camp, Hotel Royal in the small village Riederalp serves as a good base for attempting trails to the east of the glacier. With an on site restaurant and spacious rooms with natural Swiss pine, there’s plenty of opportunity for fueling, stretching and zen.

If you wanted to explore the western reaches of the glacier, head over to Hamilton Lodge, Belalp perched on a ledge overlooking the Valais region to the south. The cosy, traditional accommodation is kitted out with a sauna and massage treatment, and even fits in pilates and yoga retreats. Right out the door of the lodge is a trail east towards the Aletschbord (2130m), a viewpoint that stretches from the glacier to the north and the Matterhorn to the south. The Aletschbord also marks the start point of two excellent trails, the Sparrhorn and the Oberaletsch Panoramic Trail.

To pursue the Sparrhorn, take a left at the Aletschbord up to the Tyndall memorial, past the Lüsga Chapel and Tyndall Villa. At this point, you’ll meet a ridge at 2771m and a clearly marked trail towards the Sparrhorn at 3021m. See the exact location on this Switzerland Hiking Map (south of ‘3021m’).

For the Oberaletsch Hut, take a steep descent from the Aletschbord toward pastures that cling to the western edge of the glacier and sheer cliffs (located to your left). Keep left at the fork just past the ravine and look out for a path that zig-zags up to the Oberaletsch Hut (2649m). See the exact location on this Switzerland Hiking Map (next to ‘2640m’), and if you’ve got time, book in for a night.

From British bankers to UNESCO environmentalists

The first tourists to appeared in Riederalp in the late 19th Century, a group of Brits enchanted by the glacier and its adjacent forest. Initially, villagers were skeptical of these foreign strangers but soon found that they paid well for accommodation. Banker Sir Ernest Cassell went so far as placing his own real estate above the town after his first visit in 1985, building Villa Cassel between 1900 and 1902. During the years following, the retreat became a meeting point for many business and political personalities – a young Winston Churchill even paid a visit.

After changing hands numerous times, Swiss nature conservation organisation Pro Natura bought the residence in 1973, transforming the residence into a hotel. In 1976, Villa Cassel was reopened as the Aletsch Pro Natura Center to inform visitors about the local natural environment. Because of its inadequate insulation, the 60-bed hotel is only open for four months during the summer, during which a nature exhibition on the UNESCO World Heritage site Jungfrau – Aletsch – Bietschhorn is in place, as well as rotating shows.

Brig is the major train station in the area. Mörel is located at the lift leading up to Riederalp.