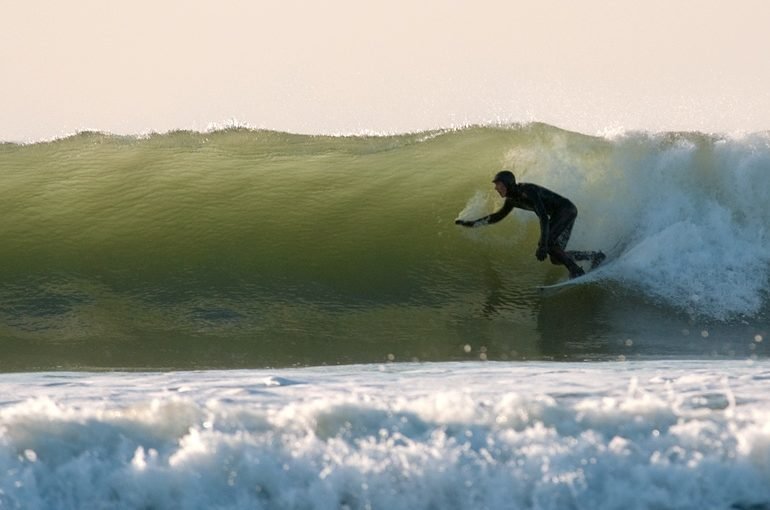 Over the last decade my friends and I have travelled the world in search of the perfect wave. More often than not we’ve discovered things that have greatly exceeded our expectations. Recently, though, we’ve found ourselves talking about how good our local spots in the UK can get on a solid swell. I guess it takes  some serious travelling to appreciate what you have on your very own doorstep!

In Wales, we’re fortunate to have it all; beach breaks, reef breaks, point breaks, hollow waves, longboard waves and the occasional monstrous waves! The only problem we really have is trying to be in the right spot at the right time. Our local spots are dotted around the Gower Peninsula. With swell hitting us from all angles, we have greater scope and diversity depending on the local conditions – pumping beach breaks of the north, to more sheltered locations on the south. Here is a little guide to our three favourite spots – don’t tell the locals we told you!

Easily one of the best spots in the UK, Three Peaks works well at low and high tide (although best at high tide) and produces powerful right and left handers which are amplified by the exposed reef (photo above). If you’ve surfed in Wales before, chances are you will have heard about Llangennith beach. Three Peaks is actually the same beach but situated at its most northern point. As well as producing superior surf, the lack of ‘easy access’ means that you can escape the crowds and make the most of your session. However, you will want to pay due respect to local surfers who flock here when there is a strong north easterly wind.

Head towards Llangennith Beach but DON’T turn left at the village roundabout. Instead, head straight on and park at Broughton caravan park – walk through the sand dunes to the beach (takes 10-15 minutes).

This is not a secret surf spot by any stretch of the imagination, but for people who visit the area in the summer months, you may be surprised how drastically different this spot changes during the winter months. Langland is a rocky beach which works only on a big swell. When North Gower is getting a pounding and the conditions are too messy/choppy, Langland is normally perfect. This does, however, mean that this tiny break gets far too over crowded when the conditions are good. In this situation we would suggest experienced surfers take the long paddle out to Crab Island – a huge wave that you can’t miss. Beginners should hit the reef where the waves are still very powerful and “sucky”.

Langland  really only works during low and mid tide so you need to plan your trip well. Also note, the summer months rarely produce much to talk about on South Gower and we would suggest heading to the north of the peninsula.

Langland is only a 15-20 minute from Swansea city centre. Though it may seem like a nice area, which it is, it is also where most surfers get their cars pinched! You’ve been warned!

Llangennith is a  mecca for watersports enthusiasts who flock to the beach throughout the year. Although this surf spot could be spoilt by the sheer numbers of surfers it attracts, the huge size of the beach means that you can still get an awesome session in even when the water is packed. Llangennith is the most consistent break on the Gower Peninsula and offers something for surfers of all levels. Llangennith gets big in the winter, and I mean BIG. It’s known for its long and difficult paddle out and even when the conditions are crystal clean, it still takes some serious physical fitness to get out back. For those that do, though, the rewards are great. Long rides all the way to the beach on powerful lefts and rights, Llangennith is one of the best surf spots in the UK.

Llangennith is incredible on a westerly off shore wind. It does tend to get a bit messy and choppy on big swells, in this instance head to the southern end of the beach and surf Rhossili. The sheltered beach offers smaller (but better waves) and cleaner conditions. If the swell is not big enough for you, take a quick jog up the beach to the northern end and get involved at Three Peaks!

Getting to the Gower Peninsula

Once in the UK, check out thetrainline.com and head towards Swansea. From Swansea you can get a bus to anywhere you want to go. For North Gower, be sure to use The Gower Explorer; a bus service that welcomes travellers with surfboards and other equipment.