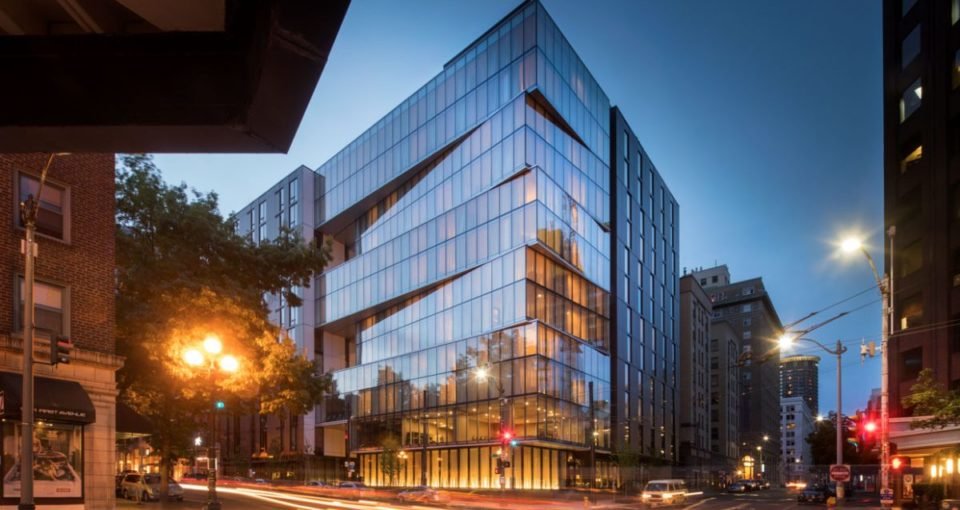 Few pieces of real estate compare in weighty provenance to the parcel of land surrounding the public market that borders Pike Street in Seattle. As well as being graced with brilliant waterfront, the few blocks surrounding the ancient market act as the pinhead to a set of roads that strike into the city center, a landmark for the Pacific Northwest.

The recent opening of Thompson Hotel’s Seattle outpost sets a geographical midpoint between two Washington empires, each helping launch the archipelago city to the top of the list of most sought after U.S. places to live. Those two empires are of course Starbucks, whose conceptual and discreet epicenter is a stone’s throw from the Thompson rooftop, and Amazon who, unlike their tech predecessor, Microsoft, opted for the subtle occupation of over 20,000 desks in the Seattle’s downtown area.

Between these tales of a massive growth, Thompson have occupied a tasteful corner of 1st Avenue and Stewart Street. The glass-fronted building constructed with Seattle’s own Olson Kundig Architects is high enough that its top five floors enjoy a significant boost in annual daylight, looking out West over the Puget Sound to Bainbridge Island. For those unfamiliar with The Thompson Group’s priorities, it’s their rooftop bars which come as salient features, fetching dusk from properties on three time zones in North America. Even on a frigid Tuesday early December, the rooftop bar, The Nest, can be found half full. The view is indeed exceptional.

The ground floor of the hotel deserves a mention too, a remarkably compact and lively part of the property. Scout, the hotel’s restaurant, occupies nearly half of the footprint, delivering the goods of Josh Henderson, another Seattle local. Henderson is the founder of the renowned Huxley Wallace Collective, responsible for a dozen restaurants all over the Pacific Northwest.

Room types fall under four categories – regular rooms, deluxe rooms, suites and studios – with the main variables being view points. Regular rooms point toward the city, while deluxe, suite and studio categories grab the best views over the Sound, Pike Place Market and along Stewart Street. The main leveller though are the 400-thread-count SFERRA linens, D.S. & DURGA products in the bathrooms and oversized Thompson Hotels dressing gown.

Roll out of your dressing gown to the hotel’s gym or venture along the waterfront for a run. To find an athletics track, jog to Seattle State University for long straights and tight bends. In 2017, Rapha opened a cafe within a 10-minute walk of Thompson, and a little further along are Métier who act as the gateway for all the best cycling in Seattle. Métier can sort you out with a bike rental for your stay in Seattle, and also have a workshop and impressive gym with barbells, weight bands and pull-up bars. Swimmers should jump in an Uber for $7 and get to Queen Anne Pool, a 50m tub that welcomes visitors.

Head to thompsonhotels.com to find out more and make your booking.