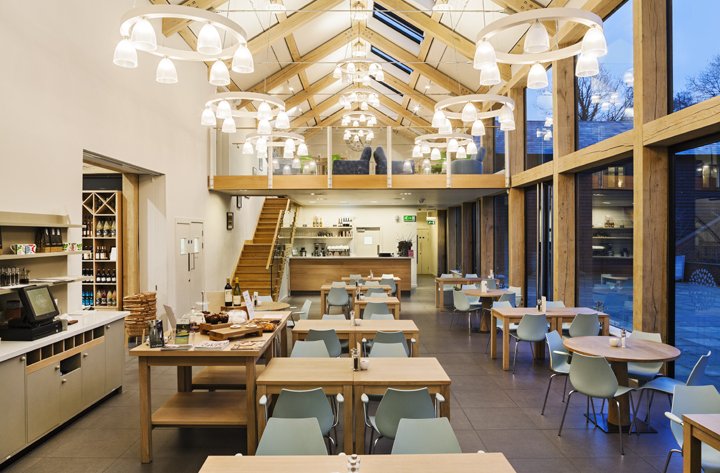 At roughly 800 calories and exactly 14 Strava Segments from my doorstep, it’s no surprise The Quince Tree is my most visited cafe. Stood at the foot of a woodland in Oxfordshire’s sleepy village of Stonor, this cycle-friendly cafe combines traditional building materials with large modern glass windows, wrapping a restaurant, grocery store and pub into a pleasing gastronomic bubble.

Update: The Quince Tree is now permanently closed in Stonor. Head to their other venues in London and Surrey. Alternatively, head to The Wild Fork at the River & Rowing Museum in Henley.

The Quince Tree stands on the former site of the Stonor Arms, a traditional pub and 17th Century coach house that fell into disrepair at the end of the 2000s. The revival began at the end of 2011 once its new owner, Bobby Yerburgh, had gained permission to revamp the space into a 70-person restaurant and a destination for drinkers and foodies.

In particular, Yerburgh wanted to make the venue appealing to women, commenting to the Henley Standard on the general failure of pubs to cater for this demographic.

“Women don’t want to sit at a table sticky with beer, so we have a great number of options, be it on the dining side or the café with its lighter dishes, or the shop.”

Plans for development were met with some resistance from locals, but with a focus to regenerate the declining site and offer everyday foods at an affordable price, The Quince Tree had a credible case to begin reconstruction. Though its first 18 months of business provided tricky and surfaced more permissive issues around the opening hours of the pub, The Quince Tree now stands as an example of tasteful design, blending the old with the new in a destination several miles from nearby Henley-on-Thames and Watlington, the two neighbouring settlements where you might normally expect an eatery of this quality.

So regular are my visits to The Quince Tree that I’ve racked up ‘Duke’ status on review website Yelp, a virtual status that credits this cafe’s open reception whenever a wet, muddy and unkempt cyclist parks their bike and stumbles into the feed zone. Between their cafe, wine bar, pub, and food hall you’re sure to meet your appetite with something caffeinated, sugary or savoury. In the meantime, their Instagram account provides a good preview of what treats they offer on their various menus.