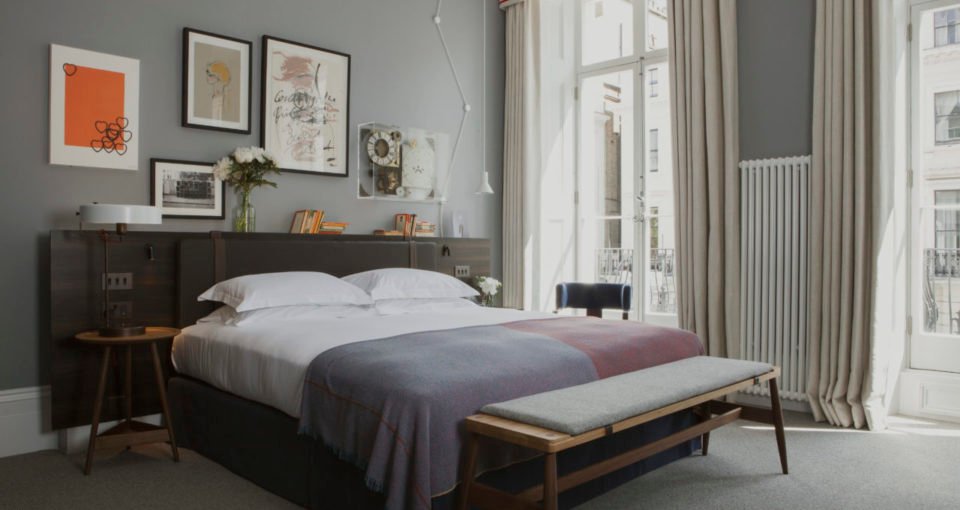 Stitch five West London townhouses together and create a team including a few accomplished British designers and you’ve got one of the capital’s more exciting hotels – The Laslett in Notting Hill. This innovation comes at a timely moment as a neighbourhood that was once London’s centre of creative gravity slowly surrenders all control to the east. Over the last two years, The Laslett has been a welcome contributor to Notting Hill’s cool factor, providing a year-round reminder that the Royal Borough of Kensington and Chelsea has hosted the Notting Hill Carnival for over half a century. For athletic types, this also means there’s another good hotel within reach of Hyde Park and the Serpentine.

Named after Rhaune Laslett, the prominent architect of the Notting Hill Festival (later “Carnival”), The Laslett is the first standalone hotel in the Living Rooms collection, currently made up of three serviced apartment properties in London. Despite its intimate floor plan at 8 Pembridge Gardens, located a few strides north of Notting Hill Tube Station, The Laslett provides a welcoming area to locals, and by extension a homely setting for its guests.

A chalkboard sign stands at the front of the property on the day I visit, demonstrating solidarity with effective advertising in the world of the speciality coffee. Sidestep the signage and a pair of glass double doors slide open with efficient ease, a few feet before the reception desk itself, and the promised coffee machine. Oddly, the approach into the property bears little in resemblance to the throng of Carnival, which more practically shuts up this portion of London for the August Bank Holiday.

The ground floor serves as the cockpit for the property, with The Henderson Bar and Coffee Shop, library and lounge area reaching out into the three corners of a pair of townhouses. The bar’s all-day menu starts with breakfast dishes involving key pillars of poached eggs, salmon, avocado and pancakes. Later in the day, a full range of plates can be cooked up, including a fleet of healthy salads. Whenever you choose to dine, a photograph of the late Russell “Russ” Henderson will be keeping watch, another effort from The Laslett to pay tribute to a second pioneer of Notting Hill Carnival.

51 bedrooms of varying size surround this core on levels above, with rooms at the front of the building get the morning light and those at the back providing cheap theatre for the neighbours on Pembridge Road. Master Bedroom Suites and Master Bedroom Doubles have bathtubs, while other room types cascade according to floor plan and bed size. Solo travellers will appreciate the allocation of a small double in the Spare Room Single category, and the bookish will enjoy leafing through Penguin Classics in their Eleanor Pritchard sheets.

The rooms and entrance area at The Laslett are the work of team of impressive group of Brits. Ben Kelway took the reigns as creative director, with Tom Barlett of Waldo Works steering the wedding of the five townhouses on the architecture and interiors front. Tracy Lowy, founder of Living Rooms, oversaw the collaboration, also allowing for furnishing and designs from Pinch, Race Furniture and Simon Day at Nocturne Workshop, ensuring the hotel has its own unique installations.

Other collaborations showcase artists that have been deeply involved in West London and the Notting Hill art scene, including Barry Kamen, Toby Mott, Barbara Hulanicki and Brian David Stevens. Most notably, curios from local antique collector Jerome Dodd are a permanent feature in the lobby and bedrooms, making their way from his store off Portobello Road Les Couilles du Chien in the shape of taxidermy butterflies and dismantled clocks. Other celebrations involve the numerous details that can be found in the bar with Workshop Coffee, Sipsmith Gin and Press London Juices in stock. It would also be hard to ignore the hotel’s copy and iconography, with “Do Me Now” and “Do Me Later” being the pair of remarks on the Do Not Disturb signs stowed in bedrooms.

Though the fashionability of Notting Hill ebbs and flows, its running, cycling and swimming credentials have remained rock solid. Here is a summary of options from The Laslett, with a more comprehensive set in our London City Guide, specifically tuned for endurance athletes exploring the capital.

Runners can either saunter into Hyde Park for lengthy loops and a gradual climb when running in a clockwise direction through the southern section of the park. Alternatively, heading north and to Primrose Hill opens up hill intervals on tarmac, while Paddington Recreational Ground‘s 400m athletics track is even nearer.

Cyclists can select either Hyde Park or Regents Park for their in-city bike riding, or head beyond the London metropolitan area by train from Paddington to Maidenhead, or Marylebone to High Wycombe for cycling in the Chilterns (you are in West London after all).

Swimmers can either go to Seymour Leisure Centre in Marylebone for a 25m tub, or use a 30m pool at the Porchester Center. Other fish-like guests staying at The Laslett in the summer should certainly dip into Serpentine Lido for open water swimming.

The Laslett provide guests with access to a nearby private gym, at no extra cost.