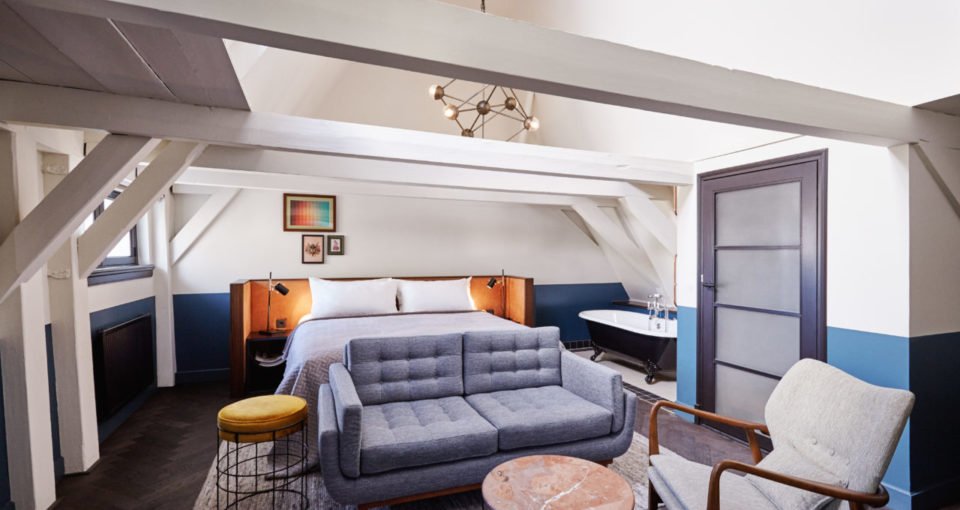 Exchanges between the English capital and the port to of Amsterdam have gone back for centuries, a pair of sea-faring people that built nations around the same shipping lanes. In 2015, The Hoxton paid tribute to this exchange with a canalside hotel in Amsterdam, marking its first opening outside London and the ambitious integration of all the details that have made the hospitality brand a success in London.

Those familiar with The Hoxton’s Shoreditch and Holborn venues will appreciate that the discreet hotel entrance opens to a broad communal area, loosely divided into bar, restaurant and lounge. Lines are blurred by locals and travellers, occupied with their laptops, cameras or conducting meetings throughout the week. There’s not a suit in sight, and most who wander through the small sliding door seem to join the workspace’s collectivism, rather than shooting straight to their bedrooms.

That’s not to say that those who do book at The Hoxton to hide away from the occasional madness of Amsterdam aren’t in the wrong. 111 bedrooms weave their way around the 18th century structure with delightful features, including eaves, rafters and custom fixings. Thankfully, navigating the various room types of The Hoxton on Herengracht is simple – four types ranging from the Shoebox (smallest) through the Cosy (standard size), Roomy and irregular Concept Rooms (header image).

Regardless of size, all rooms spread out beneath brass chandeliers, bespoke hexagonal mirrors and dark, timber herringbone flooring. Athletic guests who shower multiple times per day will appreciate the brass fixings that work as the heated towel rail (see below). Though a plasma screen is installed in each room, guest’s of The Hoxton ilk will appreciate the vintage DAB radios which comes with a USB plugin. A small stack of novels is also stacked in each room, a trend that isn’t unique to The Hoxton.

The Hoxton’s offering in Amsterdam carries over three signature treats from England, bounties that come in the form of a refined guide to spots in town, an early morning breakfast bag drop and free calls to anywhere in the world. Finding time to make the most of the mid-century telephone system might not be the envy of all, but the breakfast bag is no doubt a Hox Perks to be enjoyed by all.

Select your chosen quantity of breakfast bags on the side of a brown paper bag along with the time you would like to have it loaded, then hang it on a hook outside your bedroom. Delivery times start from 6am and include fresh orange juice (bottled), Greek yoghurt and granola as well as a banana. The daily breakfast bag service is completely worth opting into, even if your divert the bag’s contents straight to your mini-fridge and your pint of fresh milk.

If this modest offering isn’t enough, wander down for breakfast at the in-house restaurant, Lotti’s. There you can find eggs, oats, avocado and pancakes available for breakfast, and a coconut chia bowl featuring goji berries, agave syrup and strawberries. The Grilled Grapefruit is the most adventurous option on the morning menu, matched in part by the roasted cauliflower which is oddly satiating. Plenty of fish make it to the dinner menu, including soused herring with pumpernickel, mustard and pickled cucumber. Weekend brunch is of course an affair in itself.

The healthy breakfast bag gesture at the beginning of the day is one sure piece of evidence to show that London and Amsterdam continue to be passing through the same consumer revolutions. What was once a race for trading spices is now a quest for healthy cities, bolstered by the fact that over the final weekend of January, The Hoxton’s Fit + Fresh event being held out of its Holborn, Shoreditch and Amsterdam venues (and proximity institutions).

Bootcamps and runs are being held at the local Vondelgym, one of two Amsterdam venues from an operator that looks a like a Dutch Equinox. The Hoxton are stowing away at least one reverse import from the East, with Fat Buddha Yoga scheduled for “an energetic and dynamic yin and yang vinyasa class to get the energy flowing” paired with deep house. Whether or not The Hoxton use Fit + Fresh as a token gesture to year-round wellness, this festival is finished with the good polish you would expect from a market-leading brand.

A final side feature of the former Mayor’s house is a space called The Apartments, four rooms that can be rented for hourly use, serviced by a communal kitchen. The area is also booked out by occasional HoxTown events, reinforcing the hotel’s commitment to offering something for locals.

Amsterdam’s layout is effectively broken by the canal system, creating an awkward set of junctions for runners and cyclists. Runners would do well to head to Vondelpark for loops on a cinder surface or an athletics track a short tram from town at IJsbaanpad 50. Cyclists should drop into the Rapha cafe near to the hotel to join group rides or be directed on the way south. SwimGym is the best option for serious swimmers looking for lengths and organised sets, while those looking for a good gym can drop into TrainMore either on the free guest pass or through stating that you’re staying at The Hoxton – the association spans the town.

Find out more about The Hoxton, Amsterdam at thehoxton.com/amsterdam.