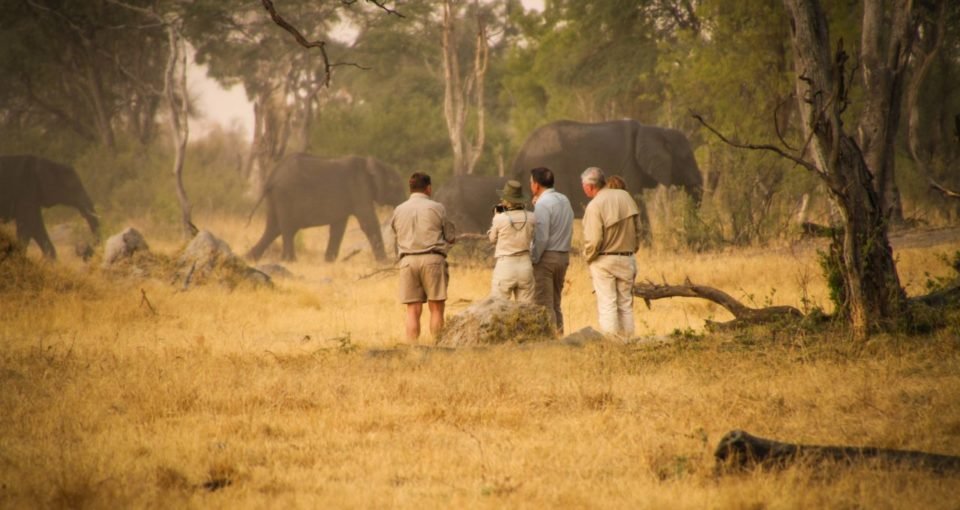 It’s easy to forget that there are still larger than life animals roaming parts of Africa, perhaps because viewing them requires an above-average travel commitment for those living beyond the African continent. Despite national economic difficulties over the past 20 years, Zimbabwe remains home to an abundant range of wildlife thanks to its broad sweeps of sanctioned habitat.

Hwange National Park occupies nearly 15,000 square kilometres of the north-west part of Zimbabwe, on the western border with Botswana and within firing distance of Victoria Falls. Until the early 1920s, the area was the home of San bushmen, the Nhanzwa, and later the royal hunting ground for Matabele king, Mzilikazi. In 1928, the area was declared a reserve under the name of Wankie Game Reserve, with the stipulation that a range of species be protected.

Its first warden, a 22-year-old called Ted Davidson, walked across the park between 1928 and 1929, remarking that the land was largely devoid of wildlife. At this point, he started to construct pumping systems to create 60 artificial pans across the reserve, encouraging wildlife to migrate and thrive in the area. Following the National Park Act of 1949 and the integration of a privately owned game sanctuary, Wankie became Hwange National Park, named after Nhanzwa chief, Hwange Rosumbani. More recently, organisations such as Friends of Hwange have emerged to help maintain pans throughout the dry season, work that is now essential if wildlife is to survive.

Completed in 1992, The Hide is one of the Park’s foremost properties for observing game, located next to one of the watering holes put in place before World War Two. In total, The Hide sleeps 20 in a range of luxury rooms near the central dining area and the highlight lookout – a chamber beneath ground level that offers a viewing spot merely yards from the local watering hole.

The property is matched with a small group of experienced guides who have spent scores of years getting to know Hwange and its rhythms. With this backing, The Hide offers bush walks for ambitous guests willing to set out from the property on their own feet. Some of the best guides in Zimbabwe have spent time at The Hide, so getting out of the vehicle allows you to stretch you legs as well as your guide’s knowledge.

I’ll admit, this isn’t something I would have found particularly comfortable at the frontend of my trip where, further north in Chobe, the beat of the bush were at odds with my more fragile existence between a smartphone, a MacBook and still hopeful startup dreams. But after a few days spent culling rapid communication with the rest of the world, the tempo of the bush took hold.

By strolling at a slower pace and at a lower lever, it’s possible to observe the tiny nooks of the bush, details that can easily go unnoticed. Small bugs and nibbles on flora provide a smaller scale that is hard to appreciate from the vehicle. These benefits come with the added level of responsibility – you will need to keep an eye on the bush around you and make sure others in the group are walking in single-file.

If you’re up for something particularly special, book The Doves Nest which is a short drive away from the main hub. You’re up a tree and left alone overnight – totally safe and a special experience that’s rare on the continent. If you can’t get into The Doves Nest, tents #6 and #7 are worth requesting – they’re 150 yards from the catering area, which can mean just little more peace and quiet if the meals and drinks of other guests continue in the dining area until the late evening. Travel to The Hide

Getting to Hwange National Park is easy from Victoria Falls, which is increasingly the most popular airport for international flights into Zimbabwe. From there, The Hide organise transfers using two vehicles – a regular people carrier to Hwange’s perimeter, then the 4×4 vehicles that are used for game viewing. The drive through the outer reaches of Hwange to The Hide then takes a further 30 minutes.

Hwange remains largely unpaved, allowing a kind of off-beaten-ness feeling as you roll beneath a broadening constellation. During the winter months, riding in a vehicle early in the morning or at dusk can be chilly, so bring an extra layer if you’re travelling in during these window.

Where you have you walked in the bush? Email Will Ross (will@zafiri.com) with your favourite spots.