The Faction Collective: Carving a new line for skiing 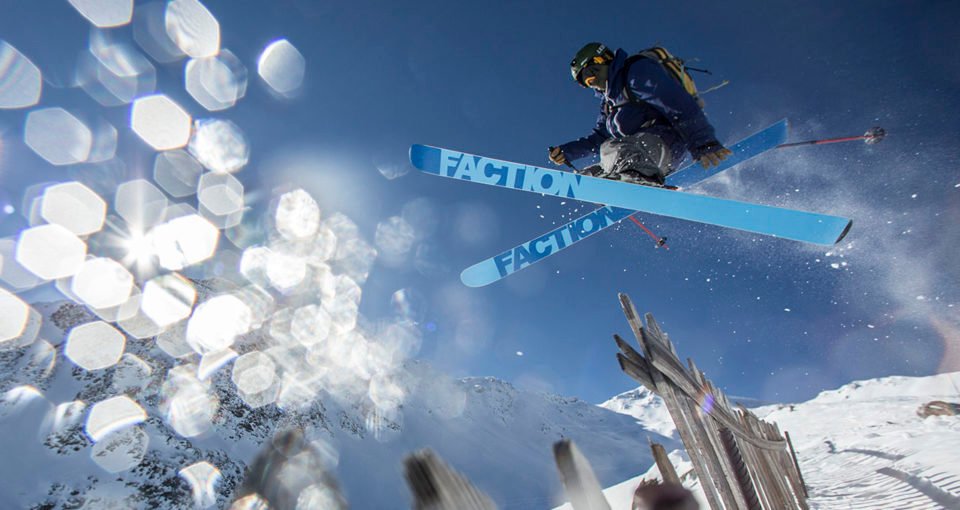 Located high up in a celestial space above London’s Silicon Roundabout, right in the thick of the burgeoning tech epicentre, can be found the UK office of performance ski manufacturer The Faction Collective. A whole variety of startups and small companies surround the winter brand at their co-working space on Old Street, astutely named Runway East for its accelerating capacity.

Visiting the empty space in early September, it felt strange for a vision of mountains and an endless quest for white gold to be held up in this concrete office. But after taking into account the company’s HQ in Verbier, Switzerland, a satellite office in Breckenridge, Colorado, and the presiding role of an in-house ski capable of serving up to eight shots in unison, the fog soon lifts with a realistic vision for its UK employees – why not combine the rigour and excitement of city life with the adorable dream of spending considerable time scoping the world’s best runs?

After listing his online auction site GoIndustry in 2006, co-founder Alex Hoye headed to Verbier for the winter, a stay which held him in the Swiss resort long enough to come across industrial designer Tony McWilliam, an Australian who had been wintering in the area for several years. The two immediately started to compare stories and their shared interest in an industry that was slowly being broken apart by a new approach to designing skis – wider, shorter and lighter was the future as the market began to move its pursuits towards freeride and freestyle.

The pair made for a dynamic duo; McWilliam, the engineer from Melbourne who had already been making skis for several years near to Geneva. Hoye, the technologist and investor whose background in technology versed him for an industry that was rapidly moving towards digital. With an investment from Hoye, the two co-founded the company in 2006 and began with production out of Poland.

From the outset, the plan was to shadow new trends in ski manufacturing and challenge the status quo. With the help of friends, the business started to grow as Hoye and McWilliam began to establish their own sense of design. An emphasis on graphics and evolutionary models set them aside from their titanic competitors, who at the time ripped and redrew models year-after-year, with no awareness of a continued aesthetic.

Six years into running the business, Hoye and McWilliam decided it was time hit growth and ensure Faction stood a chance of becoming a global leader. By the end of 2012, the company had raised $3m through Octopus Investments, Swiss-based Go Beyond and a group of angels, funds that allowed the two co-founders to inject new life into their US and European operations.

Earlier in the year, the brand signed a sponsorship and product development deal with superstar French skier Candide Thovex, signposting a new road beyond the investment round. Thovex has since helped design a signature ‘Candide’ series, fitting this around his performance career and one of the most watched videos of the 2014/15 season, One of Those Days Part II (now at 14 million views). The collection has a consistent graphic design and extends across freeride, backcountry and freestyle, with a variety of widths and cambers to suit most of the market.

Other team athletes include Adam Delorme and Tim McChesney, riders that join a transatlantic group of some two dozen riders. Faction are keen to keep this roster around the same size and nurture relationships within the extended family, a theme that resonates in their web series, WE ARE THE FACTION COLLECTIVE. Speaking with Czech rider Daniel Hanka during a London visit at the end of 2014, it sounded as though this intimacy is paying off – Hanka was supportive of Faction’s cornerstone sponsorship, and has responded with a phenomenal 2014/15 season.

Outside of ski production, Faction makes an effort to reduce consumption in the ski industry. This season the company teamed up with Gear4Guides by inviting skiers to pass on their dormant equipment to emerging ski destinations, in order to encourage winter tourism. This season they were able to shift 200kg of equipment to Kyrgyzstan with the help of Timeline Missions, Dakine, Backcountry Access, Quiksilver, Surefoot and NRI.

As Faction completes its first decade in business, the brand now has to deal with the responsibilities of a larger company. Currently available in 23 countries, Faction products have an impressive distribution that demands constant maintenance. As well as ramping up production in skis, the brand also launched apparel for the 2013/14 season, a natural move for a company that sells a high-value item capable of enduring multiple seasons of use.

The relationship with Thovex has also helped Faction enter a deal with Roxy to design and manufacture their skis under a new arm, Full Stack Supply Co.. The move comes as part of a reboot for the female division of Quiksilver – Roxy haven’t produced skis for several seasons and with Faction’s sensitive approach to designing apparel for women, the Australian boardwear giant has been convinced.

From their three outposts in Switzerland, Colorado and London, Faction shall no doubt have a full summer on their hands. But if today’s edit featuring a delectable Classixx Remix of Panama’s Always is anything to go by, they’re off to a tasteful start.