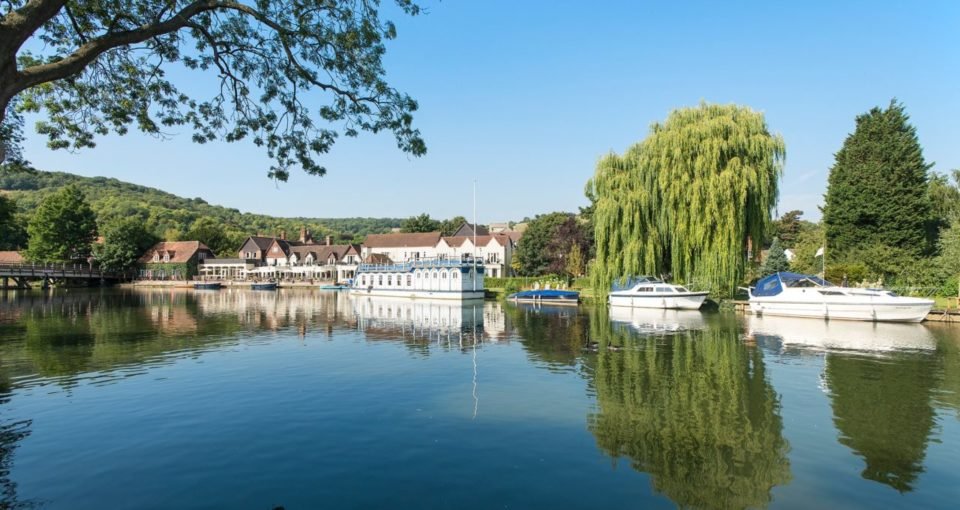 The fact of London’s location on the tidal Thames is rarely attributed to the gaping hole that makes its essential waterway possible. Roughly 50 miles upstream of Teddington Lock, the final permanent barrier in the Thames system, the Goring Gap is cut into the chalky slopes of the Chilterns to the north, and the North Wessex Downs to the south. The villages of Goring-on-Thames and Streatley get prime access to the Thames as it passes through Oxfordshire and continues its coiled path to the nation’s capital.

This geographical nexus hasn’t gone unmissed by local populations. Both Goring (Garinges) and Streatley appear in the Domesday Book of 1086, and medieval tools have been found at the base of the downs near Streatley. St. Mary’s Church has been on the same plot of land since the 15th century, undergoing major reconstruction in the 19th century about the time when the ferry connecting Goring and Streatley was replaced by the fragile formula of a timber bridge, linking the pious and privileged to an accommodation which still stands today, The Swan at Streatley. Supposedly completed in the late 17th century, the Thameside inn has become an institution and the focus of recent investment to upgrade the renowned venue.

With the ambitious reconstruction, the Swan at Streatley is closing the gap on London-standard properties, providing a home counties hybrid that embraces the river frontage. Behind the project are Coppa Club, known in the capital for their order-anything-we-can-make-it cocktail bars. Part of Italian restaurant chain, Strada, Coppa Club have been scouting properties outside the city to introduce their audience to nice tasty things at a calmer pace (Soho House have recently taken the same initiative with Soho Farmhouse). The Great House in Sonning-on-Thames is already one riverine upgrade from Coppa Club, with the Swan at Streatley being their second.

Almost nothing is going untouched, from the Grade II-listed Boat House at the front of the property to the entire flipping of the hospitality and conference facilities. A gym has also been hewn into the building, resembling a level of athletic-chic that you might more naturally expect to find in Soho than a few yards from this more timeless Thames setting.

While some upgrades point to a higher standard of requirements to remain competitive, other items have been a long time coming. The switching of the conference and hospitality sections of the property represents a simple correction – now business people will be facing the car park while those getting married can enjoy the more verdant offering that is the Swan at Streatley’s prime selling point, frontage on the Thames. In emphases, the restaurant is now a grab-and-go format, offering healthy lunches that don’t cost the world, while the renovated bedrooms have taken on a lighter, more Scandinavian touch.

In all these efforts, The Swan at Streatley will no doubt become a stronger center of gravity for the siamese destination of Goring and Streatley. Instead of trying to hem guests into their entire offering, hotel managers are happy for guests to eat out at the more sophisticated dining options across the river. The renowned cafe and restaurant, Pierreponts, comes highly recommended by the hotel and a local food truck, The Wandering Feast, is hosted on a monthly basis in the Swan’s car park (dates listed on Facebook).

Thanks to its crucial location connecting the northern and southern portions of the Chiltern Ridgeway, Goring and Streatley act as waypoints for a number of athletics events. The Goring 10K is an excellent early season tester, with some modest elevation and always a good amount of competition from nearby clubs. In the ultra categories, the Chiltern Wonderland 50 and Autumn 100 each treat Goring as their base, making the most of the 87-mile Chiltern Ridgeway. Likewise, road cyclists make their own routings up, down and along the Ridgeway, with dozens of punchy climbs available in the Chiltern Hills.

The ongoing refurbishment work does mean some of the facilities are off-limits until 2018. Drop by in the meantime to stay in one of the 20 new bedrooms and meander about this idyllic corner of South-East England.

Email Will Ross (will@zafiri.com) if you have any comments or suggestions on how to make the most of a visit to Goring and Streatley.