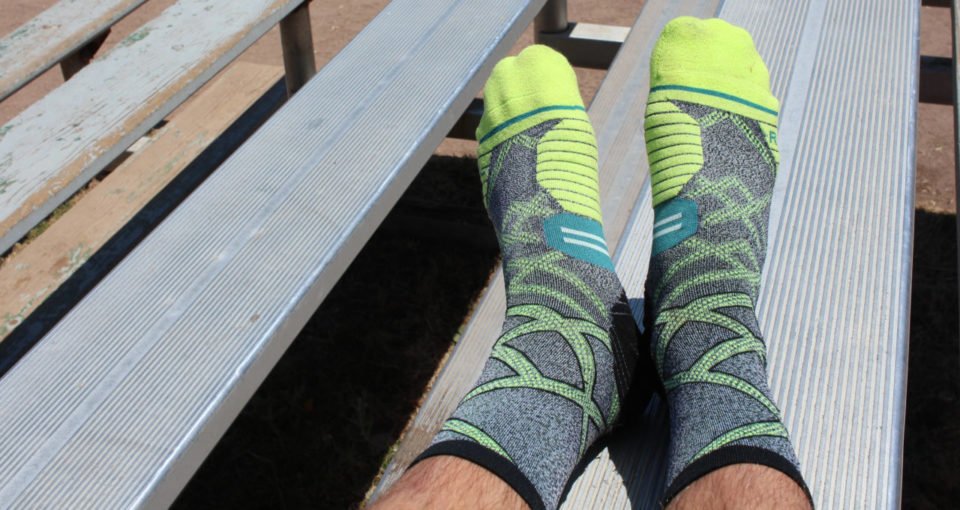 Runners looking to upgrade their apparel game don’t have it easy – there just aren’t that many items to grab. Reaching out to a cap from Ciele or throwing on a Camelbak is about as far as it goes. Whereas cyclists have a vast array of options for apparel and accessories, runners are bound to a more minimalist threads which do more exposing than enclosing.

Fortunately sports and lifestyle sock brand Stance have created a family of socks that wrap a strobe of flash around your ankle, providing timid runners with a garish glow to intimidate competition.

Aside from their looks, a pair of Stance Endeavor Crew socks is engineered with anatomical cushioning to make you really obey those “L” and “R” icons on the forefoot. Adhere to the correct use and you’ll have a versatile sock that’s not “Lite” and thin like some race socks, but substantial enough that you feel comfortable around the entire training and race environment.

I grabbed my first pair in June 2015 and have run over 300km in them since, admittedly at varying speeds with a fleet of shoes. Had I been more diligent and cut the nail of my big toes, I wouldn’t have felt so embarrassed that I needed a replacement pair. Nevertheless, a fresh pair solve the problem, while I’ve retired my original pair to situations when I know I won’t be going sockless.

But in this era of excess, it’s at least permissible to own two versions of the Endeavour and align with one of Dumbledore’s more important claims, “One can never have enough socks.”

If you have particularly strong views on socks, email Will Ross (will@zafiri.com) to throw them out there.