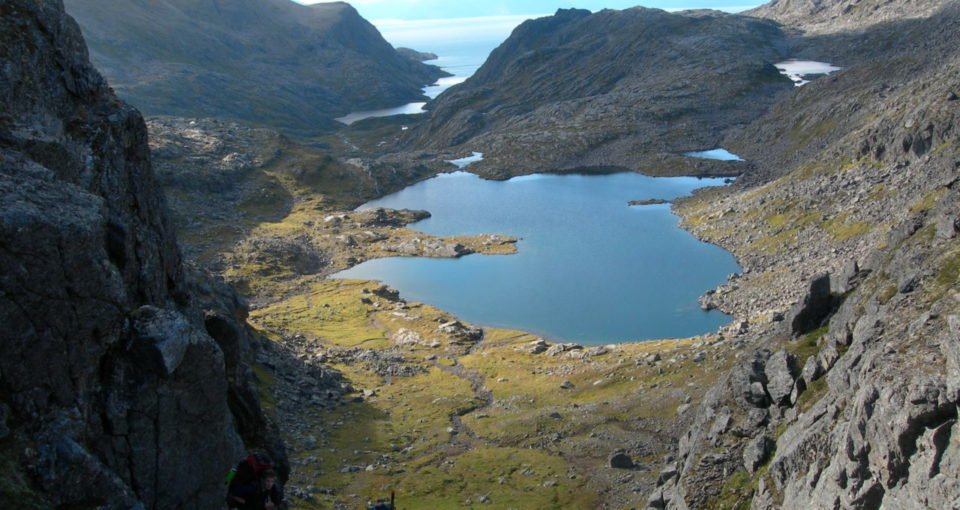 Floating off Norway’s northern coast, Sørøya is one of Norway’s hidden wilderness regions. It’s location is unique; 400km north of the Arctic Circle in the Finnmark region yet within spitting distance from northern continental Europe. The island has an untamed surface area of 800km², offering plenty for the outdoor enthusiast looking for a fishing, trekking and kayaking exploration.

During August 2010, I spent two weeks on the island with a vague itinerary  based around 8 days of camping in the mountains and five days sea kayaking. Our goals were to simple: to climb mountains, fish and see the spectacular wildlife in between. The vast majority of tourists who travel to Sørøya come for the world-class sea fishing on offer, leaving the island with a strong coastal economy and inland regions which remain largely untouched except by the few locals.

During the summer season, Sørøya offers truly phenomenal fishing both for brown trout and arctic char in its inland lakes. On the coastal regions the saltwater species are incredibly abundant with cod, halibut, haddock, redfish, coalfish and wolf-fish and even with our line skills, the chances of catching some world-class  fish were realistic. Over the two weeks we never once lacked tasty fish to supplement our evening meal.

The best time to visit Sørøya is from June to the end of September. The best fishing however is from April to September with large cod being most popular in April and May. Unlike most of Finnmark, Sørøya does not have hordes of mosquitoes during July and owing to the cooler conditions in August time, our visit was mosquito-free.

Here’s a list of the equipment you need to bring:

Maps covering the entire of Sørøya were easily obtainable in Hasvik at the shop for £15. All food was bought in London tobring costs down, Norway can be very expensive. We packed around 10kg of food per person for the two weeks; oats and dried fruit for breakfast, cheese and salami with tortillas for lunch and couscous, rice or ramen noodles with freshly caught fish for dinner. We planned on our packs weighing 25kg however overenthusiastic packing resulted in pack weights of around 30-35kg at the start of the trip.

Without doubt the best source of information on Sørøya was our guide Ørnulf Jacobsen. We had intended to rent kayaks from Ørnulf but due to bad weather he quickly arranged for us to have a sturdier fishing boat instead. He also helped plan our hiking route through the mountains providing invaluable information. If you are planning a trip to Sørøya do not hesitate to contact Ørnulf by an email to oejacobs@online.no. You can also find the most accurate temperature records for Sørøya before you set out.

Although remote, Norway’s excellent public transport network does reach as far north as Sørøya.  From Alta Airport we bought a student bus ticket to Øksfjord, from where we caught a ferry to Hasvik on the island of Sørøya. Overall if done efficiently the journey can be done door-to-door in 12 hours. Total travel costs came to £260 including trains to Gatwick, flights to Alta, bus and ferry.