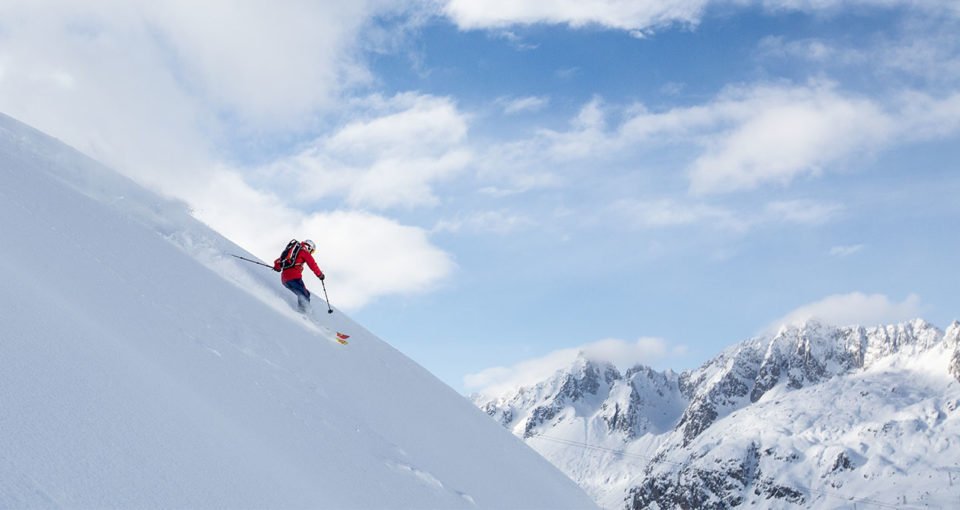 Owing to its relative isolation in the centre of Switzerland, the small ski town of Andermatt hasn’t yet been promoted to the league occupied by giants like Zermatt, Verbier and Klosters. But with a typically alpine village and a challenge skier’s terrain, the mountain resort is deserving of its popularity among the Swiss, including its notorious military.

In total there are 120km of pisted runs – 40km graded difficult, 52km intermediate and 28km easy.

The best skiing and snowboarding is found on the highest mountain called the Gemsstock (2961m) which is reached using two cable cars from Andermatt (1444m). The mountain offers some long descents and has secured Andermatt’s reputation as one of the best Swiss resorts for off-piste. There is plenty to explore in the two valleys that run down from the top of the Gemstock to a 6-person chairlift at around 1200m, a new installation. Once you’ve scouted out this mountain head across to the other side of Andermatt and take two chairs to Gütsch at 2344m where there is some more gentle piste.

Birdos is a neat brand who make handmade freeride skis in Andermatt. Check there shop out in the village and see whether you want to take your skills to the next level. Every year the April King of the Mountain event for skiers, snowboarders and telemark skiers finds its way down the mountain. The link is in German but you are able to enter – just follow addresses to ‘inscription.’

For parks, head over to Sedrun to ride the Funpark with its own lift, halfpipe and other obstacles to get air or check out the G-Parc at Gurschenalp with 400m of jumps, rails and boxes.

Scan the map of the Gotthard Oberalp ski area before you go and always check the avalanche service before heading up the mountain.

There are three areas within the Ski Arena Andermatt Sedrun: Andermatt-Gemsstock, Andermatt-Nätschen and Oberalp-Sedrun, with tickets providing access to all of them including the train between Andermatt and Sedrun.

The GOBA annual ticket, Central Switzerland snow pass, and Surselva ski pass are all valid for the Andermatt-Sedrun ski area.

The River House is a cosy boutique hotel in the old village with eight rooms, each stunningly furnished and designed to suit its riverside setting. The hotel has its own restaurant and bar so you can feel right at home when you come back from the slopes. Alternatively, Basecamp is Andermatt’s snowsports hostel at 1508m, with beds starting from CHF38 per night.

During the winter season you are able to travel for free on the Matterhorn railway between Disentis-Sedrun-Andermatt-Realp-Fiesch and Andermatt-Göschenen.

Go to Andermatt Holiday Region to find out more about winter activities in this winter playground.