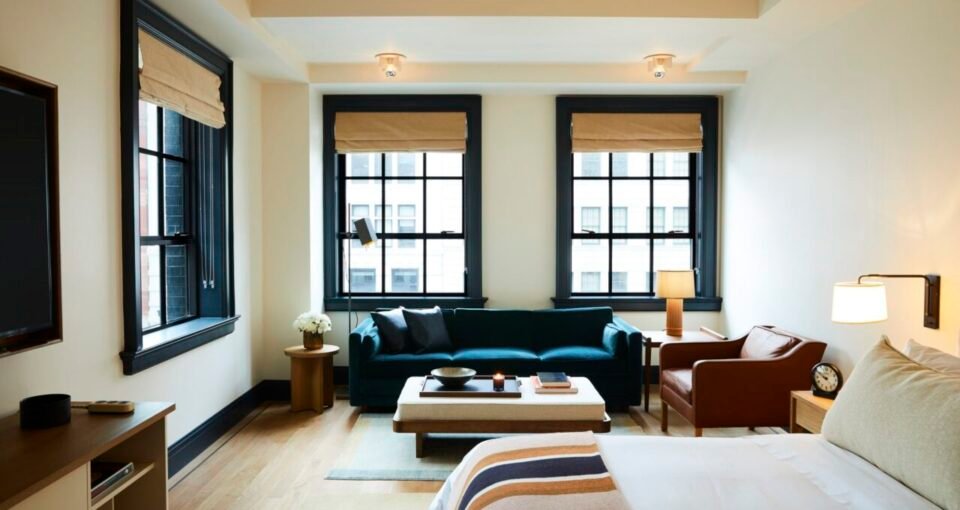 During the century that followed the secession of land by four Anishinaabe tribes in 1807, Detroit’s growth was gradual. Wagon wheels and bicycles predated the automotive industry, a manufacturing backbone which brought wealth and fame to the banks of the Rouge and Detroit rivers. Auto barons Henry Ford, John F. Dodge and the Fisher brothers built industrial titans in Detroit and its nearby towns, vaulting south-east Michigan into the 20th Century.

The City of Detroit’s bankruptcy in 2013 marked a low point for a city once home to four million people in the buoyant economy mid-century economy. Yet over the past decade, the modest rise of another hard goods brand has proved a constant.

Founded by Texan Tom Kartsoties of Fossil Watches, Shinola confidently holds up “boutique” with an array of small batch products – wallets, watches, stationery, bicycles and a few items of knitwear. Then in October 2019, the company introduced a new hotel and hospitality operation to Downtown Detroit – Shinola Hotel.

With the new address, Shinola blends designer consumer goods with hospitality, also partnering with the city’s leading real estate agency – Bedrock. Since 2011, Bedrock have purchased over 100 properties in Detroit with a 1915 terracotta-clad building and its neighbouring Singer Building holding up the cornerstone of Shinola’s annexed development.

Shinola enrolled Gachot Studios to update the buildings, introducing 129 rooms across 10 storeys. The hotel is divided using Shinola’s signature blue, framing dense furnishings and spacious corridors that reach across to the annex construction. There are four main room types, with the Study Queen holding up an ambitious entry point at 18m². Studios, Lofts and Terrace options provide a tiered spread of room types for businesses travellers and couples looking for an unusual stay in Detroit.

At street level on Woodland Avenue is the hotel’s Italian restaurant and breakfast location, San Morello. A speakeasy is buried into the centre of the building. Meanwhile fast dining options are within a stone’s throw of the main reception. The Brakeman is your enlarged sports bar, and Penny Red’s a friend chicken spot. Within a five-minute walk of stadium Comerica Park, Ford Field and Little Caesars.

Looking to balance San Morello with a music-themed waypoint from Detroit? Head to Marshall Mathers’ (Eminem) Mom’s Spaghetti which opened on Woodward at Midtown in September 2022.

The central part of the city is located on the banks of the Detroit River, signposting a continuous run along the RiverWalk. Another artery is Dequindre Cut Greenway (Google Maps) – a flat, tarmac route that slices through the centre of town past Eastern Market. The two-mile stretch marks the former  Grand Trunk Railroad.

Three miles from Downtown Detroit is Belle Isle – a beautiful piece of land with plenty of cut throughs and pavement to run uninterrupted. There is only one way to reach the island – aim for MacArthur Bridge via RiverWalk. Find an athletics track to the north of Shinola – Tom Adams Field (Google Maps) in Midtown Detroit.

Cyclists have hundreds of miles to choose from but no clear roadway. Belle Isle provides the best circuit for moving at speed on a road bike – 60% of a 5.4-mile loop is separates from traffic and well surfaced. Rouge River Greenway Loop is also a quiet strip to cycle on. Wolverine Sports Club organize a series of group rides across Detroit – make contact with them to find out what you need to complete via their waiver.

Shinola Hotel’s neighbor is the Boll Family YMCA, home to Detroit’s most central swimming pool – 25m in length. Day passes hover around $20 with better rates available for multi-day versions. During the summer, open water swimming is possible on the Detroit side of Belle Isle.