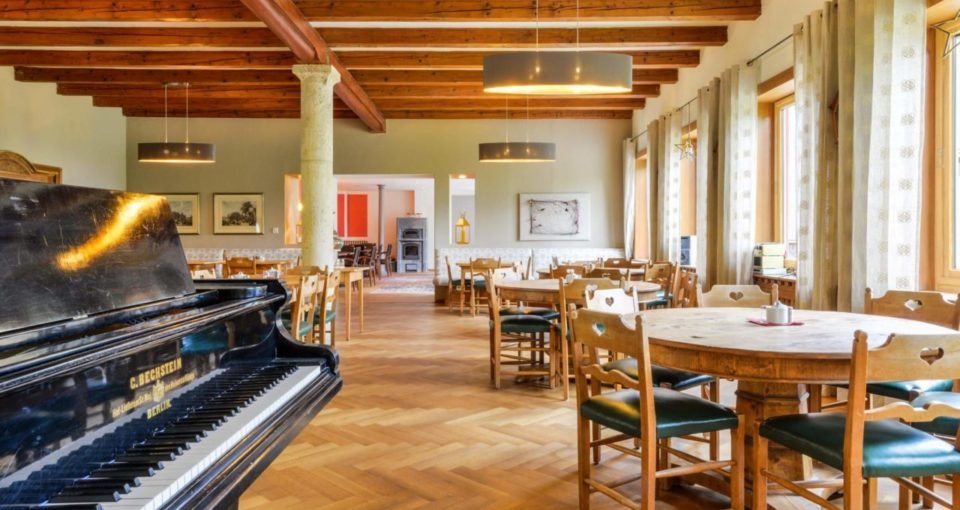 Drifting south from Munich by train is a meditation in itself. As the Deutsche Bahn slides through the suburbs of the Bavarian capital, a verdant carpet opens up. First the vast water body of Lake Starnberg signals the end of the city limits, with organised patches of farmland marking the continued path to the alps, their barn roofs impressively embossed with solar panels. Occasional rises and lumps of earth gently shape the landscape until the Bavarian Alps start in their ascendency, indicating the end of Germany and the beginning of Austria.

Germany has an array of lakes at the base of its Bavarian Alps, with Tegernsee and Chiemsee being the most renowned. Other hill stations occupy plots with modest elevation further up the alps, roughly between 500m and 1000m above sea level. It’s in the direction of Garmisch and Germany’s highest mountain that a new vegan hotel, SeinZ, has found its foundations 75km south-west of Munich, so starting a story that dives deep into a national history in healing and alpine wellness.

From the outset, the 120-bedroom hotel sits at odds with its typically Bavarian surroundings. The hotel logo clearly evokes Eastern origins, with veganism acting as a vital pillar for the operation. By the time we arrive in the middle of a Friday afternoon, meditation classes are in full flow and the atmosphere has an ambient calm to it, especially on the eve of Oktoberfest in nearby Munich.

Yet the recent renovations of the 1870 building made by owners Doris and Christian Kramer are merely an updating of systems and beliefs. During the 20th century, the property thrived as a place to embark on preventative health projects, once legitimate parts of a health insurance plan with German providers. Those plans for overnight breaks at hotels are now a thing of the past, meaning that guests need to pay out of pocket to visit Bavaria’s surroundings, essentially removing a subsidy that floated hospitality.

The reopening of the accommodation in 2016 includes a refreshing of the entire property and the repurposing of shared facilities to better cater for groups. Bedrooms are deliberately simple, with organic toiletries provided but none of the extravagance of shower caps and cotton buds. Televisions have also been omitted from bedrooms, a splendid refinement for some, and a crushing blow for others. A small sofa is supplied, as well as a delightful wooden writing desk, but otherwise guests can only marvel at the wonderful closets and find order in their possessions for a cleansing stay.

Additional facilities include an 8-person sauna, a infrared chamber and massage room, requirements in these parts of Europe. A 20m pool is being replaced for a conference room, while facilities at the back of the property have been routed neatly by gravel pathway, allowing access to a Walden-esque pond, fire pit and stables for horses. Logisticians with a penchant for cryotherapy will figure out a way to use the pond for cooling, then wrap a loop around the building to enter the sauna for the other half of the treatment.

A central feature at SeinZ is the spacious dining hall which, despite its impressive size, hasn’t lost a sense of intimacy. For sure, the room is less beerhall than communal dining, with guest sharing set meal times at 8am, 12:45pm and 6:30pm. These three events set a rhythm to the day, each delivering their own slice of utterly delicious vegan spreads. Energised water is available throughout the day alongside any honesty bar, and the whole setup works very well for a dedicated weekend of training.

As well as providing an outstanding retreat for those looking for self-reflection and uninterrupted restoration, SeinZ also opens up Bad Kohlgrub’s backdrop for active tourists with a preference for mountain biking, hiking and trail running. Ambitious swimmers can also spend 20 minutes walking to a nearby lake for swimming in the warmer months. Here’s a little more detail to provide some context.

A hike out of SeinZ takes you up the Hörnlehütte over a 2-hour amble, before continuing along a jeep track towards the descent on the south-west side of the mountain. The hut itself serves as a justifiable pit-stop, with traditional Bavarian meals available for sampling throughout the year. An observation deck around the back of the hotel shows that rolling terrain to Munich, just about visible on clear days, and the faint rumbling of Oktoberfest for two weeks just after harvest. After lunch and a viewing, the descent to Oberammergau mirrors the c. 7% gradient of the ascent, also passing through through conifers right until the trail meets the valley base. Oberammergau is made of one high street where we grabbed an ice cream before stumbling on the train for the short ride back to Bad Kohlgrub.

Though Bavaria’s mountains don’t open up the kinds of sweeping climbs that road cyclists might expect in Italy and France, flexible bike riders can switch to mountain bikes and explore the excellent infrastructure that flows out from Bad Kohlgrub, connecting numerous villages and hamlets. We completed a 50km / 700vm loop on Christian’s recommendation, passing through more idyllic farm fields, forests and along the bank of Bad Bayersoien lake itself. Bike rental can be arranged through 2radstadl-wurmansau.de – you won’t need anything softer than a hardtail.

Serious alpinists might scoff at the 500m chairlift servicing the nearby Sonne hill during winters. But cross-country skiers will certainly appreciate the 120km cross-country trails, the same trails that are the mainstays of trail runners during the summer. The higher elevation of Bad Kohlgrub means that snow hangs on the mountains through March, providing a little time for runners and cyclists to find some winter season form with some cross-training.

Though SeinZ is still in its earlier years, the hotel’s connection to legacy, innovation and conscientious practices provides a dynamic confluence in Germany’s Ammergau Alps. Both large groups and soloists will find a place in the community, enjoying personable service unknown by more pampered hotels. Whether you see your stay as a cause for seeking adventure in the alps or as an opportunity to dedicate time to deep relaxation, SeinZ delivers. If I get back for winter, further athletics and delicious feeding, I’ll be sure to update this post and will no doubt have more to say about its capacity for endurance, and deep winter dips in the pond.

For pricing and availability at Seinz, visit their website, seinz.de. It takes 90 minutes to travel between Munich and Bad Kohlgrub by train, with a single change at Murnau. Those with wheelie bags should alight at Bad Kohlgrub Kurhaus (less than a mile from the central station), so they can roll on tarmac all the way to the hotel’s doorstep.