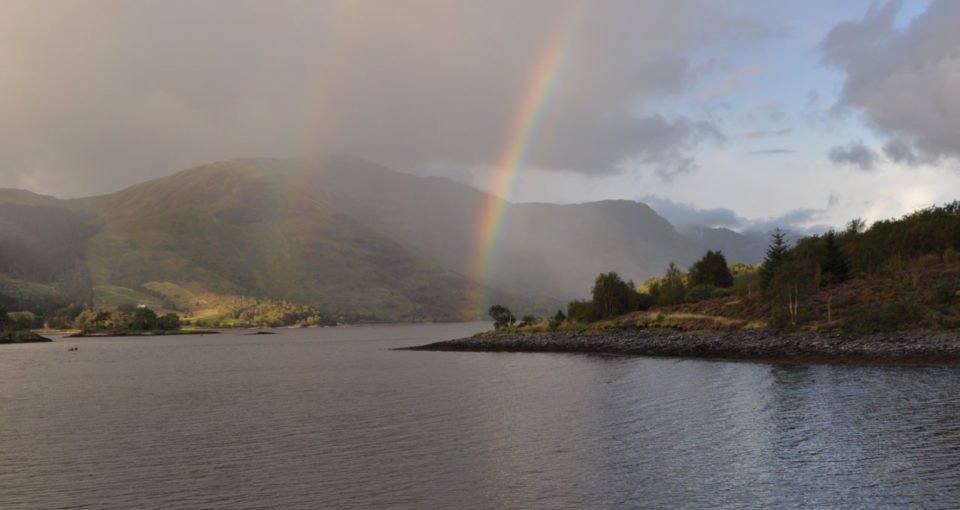 Registration was in the eastern town of Nairn on the day prior to the start, followed by the installation of your bike at the first transition point. This is easier done in daylight, especially when the bike in question is a tandem, as in our case. The Raleigh tandem was generous loan from Mikes Bikes of Aviemore, safely delivered using a Thule bike transportation system into the dusk that descended before the race.

There are three classes to the Scotland Coast to Coast race:

I went for a mixed pair in the Racer category.

The start was on the village green beside the beach of Nairn at the rather gloomy and anti-social hour of 06:30am. We started the first 7-mile run as dawn rose fresh and rosy fingered above the glimmering North Sea. The first leg was an easy run through the undulating farmland to the transition at Cawdor Castle; a simple start that lulled many into a false sense of ease.

We rolled out of Cawdor on the tandem with a 48-mile road ride ahead. Legs nicely warmed by the run, we concentrated on hydrating and settling into a rhythm as made our way west across Scotland. The first 38 miles were gentle, but the road ramped steeply for eight miles to a barren summit, before plunging down into Fort Augustus to close out the leg.

Fort Augustus was the second transition and our first chance to meet up with the support crew and restock my Osprey Manta pack. At Fort Augustus, we paddled a two miles of the kayak leg, then mounted our trusty tandem to tackle the 33-mile off-road section.

The single-track on offer did not disappoint and would challenge even the most competent XC rider. This made things especially interesting on our two-seated steed, but we made it through without punctures. A short road stint took us into Fort William, where we said goodbye to the bike, fuelled up, and hit the trail on foot.

The final 14 miles of trail running involved bisecting three valleys, including part of the path to Ben Nevis; the UK’s highest peak. This was the hardest part of the event. We were eight hours in, and keeping sugar and water levels up was tricky, although the task was made easier by the excellent Honey Stinger products we consumed throughout the event.

After battling for nearly four hours, with my Salomon XT Wings 2 gripping the muddy slopes, we made it to the final leg; the kayak to the Isles of Glencoe Hotel. With the finish now within sight, our spirits were galvanised and we found the energy to scythe across the water. Crossing the line as the sun set, elation was quickly consumed by relief after 12 hours and 23 minutes of non-stop adventure.

Rat Race’s organisation was faultless, the course was superb, and I will be returning next year for what is fast becoming an essential event in the diary of any serious adventurer.

For more information on Scotland’s Coast to Coast race, go to ratrace.com.