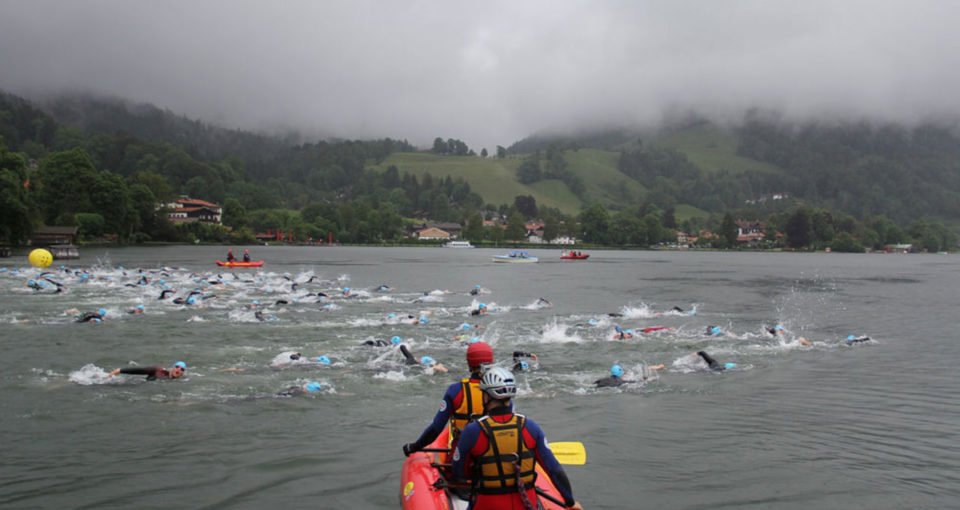 Only a downpour in Bavaria can last 1500m, 40km and 10km. For those gathered at the lakeside for the Sixtus Schliersee Alpentriathlon at 11am on Sunday 19th June 2016, there were murmurs of expectation and gestures of solidarity passing between the fated 500 triathletes, a bunch bizarre enough to sacrifice their Sundays in a canyon filled with rain.

Considering that the forecast from The Weather Channel promised a 100% chance of rain, the prospect of hopping into the lake didn’t seem all that bad. The water was a mild 15 degrees Celsius and the surface of Schliersee was calm as the heavens continued to filled her up.

The true effect of the constant shower was more easily noticed in the transition area where a series of ankle-deep puddles had already begun to position themselves before the swim even started. So after completing the clockwise loop of the swim, your task was to evade these auxiliary puddles and haul your bike to the top of the transition, a grassy ramp of perhaps 100 metres.

Finally out of the T2, a short spirt of drive took competitors onto the main drag down to Hausham, an undulating track that would have been good tarmac for a confident tuck on the tri-bars, but for the series of streams that found their confluence either side of the camber.

A fire engine marked the first corner to take the bike course into the hills, flashing lights alerting us that a heavy grip on the brakes and wide birth to the right would be needed. Fire engines marked many of the corners along the bike course – perhaps half a dozen, with about three times as many firemen at numerous no-go junctions – their guidance must be commended.

But even with secure navigation, the Schliersee Triathlon no doubt promises a gruesome bike ride. The race has earned itself a reputation for its challenging route which, aside from the ordeal of sharp bends on a wet day, is more lumpy than flat. Over the 30km between Hausham and the base of the final climb to Spitzingsee, you are broadly cycling around farm fields, fantastic soil for tilling the earth of raising livestock, but less good for rigid bikes and pointy tri-bars.

Climbs vary from a pair of short spikes, the Deininger Berg (600m, 7%) and Niklasreuther Miststück (600m, 10%) which appear unannounced midway through the bike course, while the magnificent final ascent to T2 in Spitzingsee, Spitzingsattel (3.7km, 9%), punctuates the course with a more formal infamy. This final heave is heroic, especially given the drenching all athletes received during their ride until this point.

With the bike section done with, some moderate-to-rolling terrain made up the route of the run. Leaving transition, the route first swept downhill out of Spitzingsee before engaging with a mountain trail on the way back to the lake for two loops of a flat and fast perimeter walking loop. Though the trail presented a further climb of perhaps 3 minutes, its difficulty was moderate when compared with the ordeals of the bike ride, more of a tribute to the earlier alpine assault.

The final mountain was positioned immediately after the finish line, in the form of a seemingly unlimited amount of spaetszle, much to the delight of racers now weary and wondering how they could make it back down the hill to T1 to continue their Sunday jaunt in the depths of Bavaria.