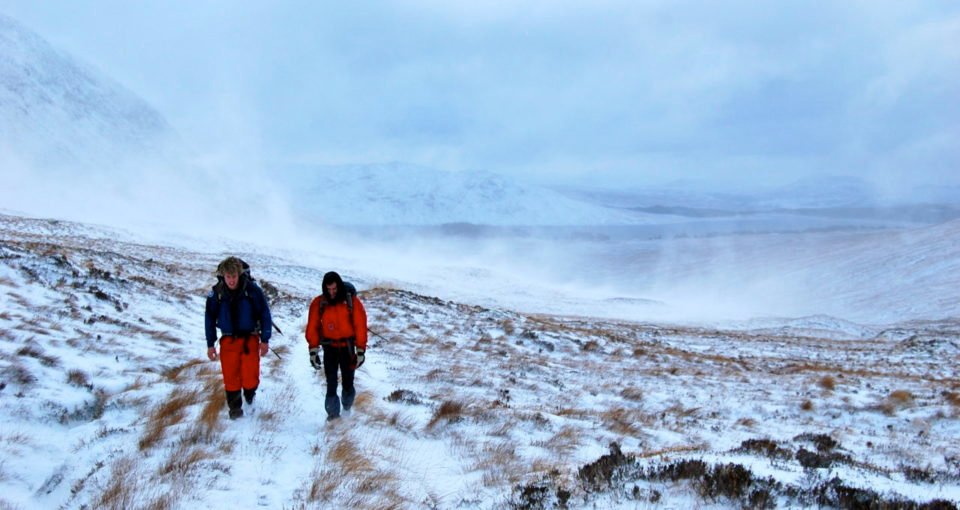 In late November I headed out with Olly Worsley and Will Ross to the Scottish Highlands to do some winter walking. We caught the 0821 train from Glasgow on Friday morning, arriving at Corrour Station three hours later. As a request stop in the middle of a wilderness, getting off at Corrour makes a daring statement. We struck immediately north-east on a track to Loch Ossian, the starting point for my winter walking season this year.

Hugging the southern shore of the Loch is the Loch Ossian Youth Hostel, an accommodation with 20 bunks and a reputation for demonstrating an example sustainability in a wilderness location. Electricity is generated by a wind turbine and solar panels and compost toilets are cleaned by a natural reed-bed treatment system. The twenty beds are split in two dorms of 8 to 12 beds, separated by a fully equipped kitchen with two large tables. Set in such a remote location the hostel provides a great base for some ambitious climbing and all-day fishing. The hostel is closed in the winter but can be rented out for £300 per night by larger parties on request, just call 0870 1 55 32 55 or make an online booking.

We planned to stay at a bothy further up the valley so headed up the eastern side of Loch Ossian, taking a minor path to the right beyond the shooting lodge that sits on the northern tip of the Loch. The path continues along the bank of the Uisge Labhair up the Beahlach Cumbann path but progress on this is slow and inefficient. We wanted to head over to Loch Rannoch so decided to leave the path and bag one of the 4 peaks to the east (Beinna a Chumhainne, Meall a Bhealaich, Sgor Choinnich and Sgor Gaibhre).  Even in late November, the 0821 train from Glasgow allowed us enough light in order to achieve this, although we cut it pretty fine, in the end, reaching our accommodation at dusk.

Making the decision to take on some Munros, we took a bearing from where path leaves the wood (417 696) up to Meall nathrach Mor and climbed steadily in the mid-afternoon of Day 1. On Meall nathrach Mor we took a further bearing on Sgor Choinnich. Taking regular bearings is very important in snowy conditions because identifying features is harder when everything is covered in snow – indeed we were to lose ourselves in a whiteout the next day. The top of Sgor Choinnich offers a splendid view of both sides of the valley from where we took a final bearing and headed straight downhill towards Benalder cottage and a night’s rest.

We arrived at the bothy 2 hours late just as it went the last light went. In hindsight instead of summiting Sgor Choinnich, it would have been quicker to head over Meall a Bhealaich and instead of batting the ruts of the plain, follow the ridge off towards Bac na Craonibhe (475 686) and down to Benalder cottage (498 680).

The Ben Alder cottage is part of a collection of buildings maintained by the Mountain Bothies Association, an organisation committed to providing shelter to walkers and hikers in Wales, Scotland and Northern England. Bothies remain unlocked throughout the year making longer trips far easier to plan. The bothy at Ben Alder consists of three rooms in a row, two of which have fires and raises the sleeping platform. The bothy is also at the end of a stream that runs into Loch Rannoch, indeed it was running in sub-zero conditions when we were there. It’s always good to arrive at a Bothy well before sunset because often they can get busy, even in the worst conditions.

The next morning we took a bearing at 0830 for Loch a Bealach Beithy. and began to climb up onto Beinn Bheoil before heading back across the saddle and up onto Ben Alder. The Ben Alder ridge can be followed all the way round and down along the rockier ridge at its northern end with splendid views the whole way along. Down the other side there is a path the Bealach Beithy path that heads south back to Benalder cottage. Although we were unable to do this route another party that we met in the bothy did and highly recommend it, suggesting the use of an ice axe at least -if not crampons as well- after one of them took a considerable slide only to be stopped by some rocks.