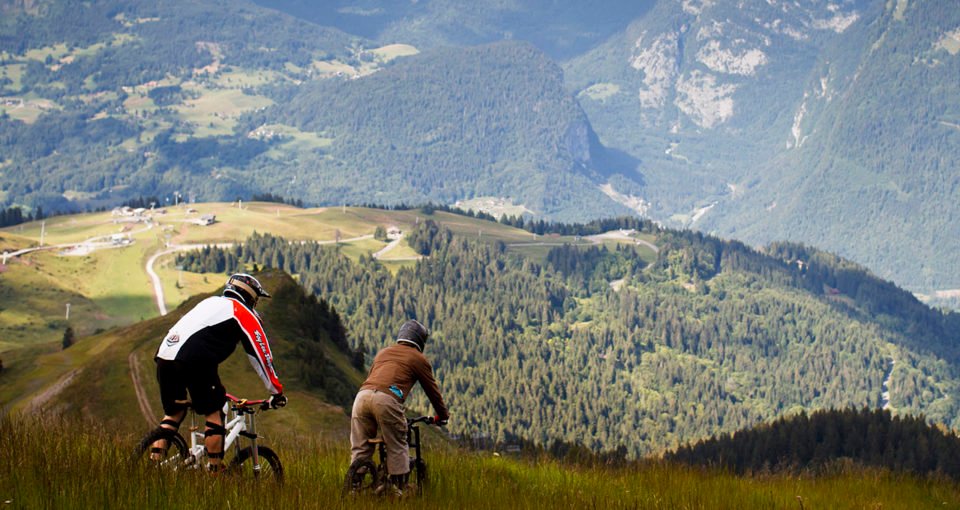 Neighbouring some of France’s mighty winter destinations, Samoëns packs a punch for summer endurance athletes and downhill mountain bikers. The traditional medieval village is one hour’s drive from Geneva, carving out a worthy training base for serious athletes and active families.

Samoëns singletrack mountain biking extends across nearly 200km of trails and 28 dedicated downhill slopes, with the option to head deeper into the Grand Massif system. The forest of Les Carroz and Morillon’s national downhill run are all within firing distance of the village, as are the trails above Flaine and Sixt. To combine hard riding with some thrilling spectatorship, head to Samoëns in mid-July when they’ll be hosting the fourth leg of the Enduro World Series mountain biking.

For accommodation, seek out Bike-Alp who are also handy feeds for gnarly routes in the area.

For those looking to take on road cycling in the French Alps, Samoëns isn’t a bad place to start. The Tour de France is regularly in the area scoping out many of the classic alpine ascents. For roadies, Chalet Chocolat serves as a divine retreat – they’re also versed on local routes for skinny tyres. Here is a selection of notable climbs marked as Strava segments:

If you get your skates on, you might be able to check into the local trail race, the Samoëns Trail Tour, taking place for the third time across 20th and 21st June in 2015.  The longest route, Tour du Haut-Giffre, will take on 65km and 4500vm, with the Giffre Tower parcours offering a more moderate option of 30km and just over 2000m of climbing. At 17km and 1000vm, the Discovery Trail is your second shortest option since at ‘Vertical Criou’ (vertical kilometer of hell) will head up the mountain at 10am on the Saturday from the nearby hamlet of Vallon d’en Bas.

Legendary trail runner Dawa Sherpa will be on site as race ambassador – June couldn’t get any better.

The easiest way to get to Samoëns by train is to route via Geneva. From Geneva station, a number of transfer options are available in the direction of Samoëns, 40km to the east. Magland is the nearest station.