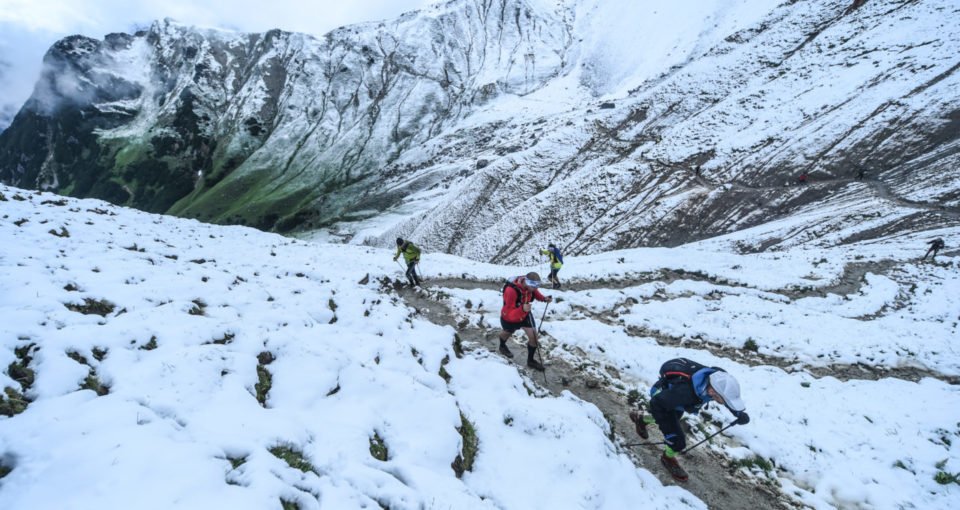 The Zugspitz Ultratrail is one heck of an assault, with five start points at the foot Germany’s highest mountain, the hallowed Zugspitz. Standing at a peak elevation of 2962m on the border with Austria, Zugspitz looms over the rest of the Wetterstein range, mere foothills compared with the priority terrain for this June trail running race.

Though relatively new to the trail running and ultra scene, the location and parcours have already approach the legendary with mixed weather conditions forcing athletes to take a multi-season approach on some exposed relief.

In 2015, the routes were wrapped in a drizzle, broken only by downpours of rain with air temperature no higher than 13 degrees Celsius. Slushy deposits of snow clung to the singletrack trails and visibility was so bad at the high altitude passes race that organisers were forced to redirect participants to lower altitude trails.

Despite the adverse conditions, 2000 enthusiastic athletes from 50 nations made it to their respective start lines for the fifth version of the event, and number of entries that has been matched for 2016’s edition.

The terrain and reputation of the race are already worthy of world-class racers who have added the event to their calendars. For the sixth edition of the Zugspitz Ultratrail, Adam Campbell from Team Salomon is due to enter the 101.6km Ultratrail, while teammate Rémi Bonnet takes on the the 25km Basetrail course. While Vancourite Campbell is a seasoned ultra trail runner, Bonnet is more familiar with uphill ski racing, a sport in which he is already Junior World Champion. At just 21-years-old, his sidestep into trail running is representative of a European breed of mountain athlete that is starting to set a trend.

For Normals, the mighty Zugspitz is approached from numerous directions across the range of distances, entitling the villages of Grainau, Ehrwald, Leutasch-Weidach, Mittenwald and Garmisch-Partenkirchen to host venue status. If you happen to be in the area, note these start times to catch a glimpse of an international community of some 40+ nationalities struggling around one piece of rock. Or consider entering next year: