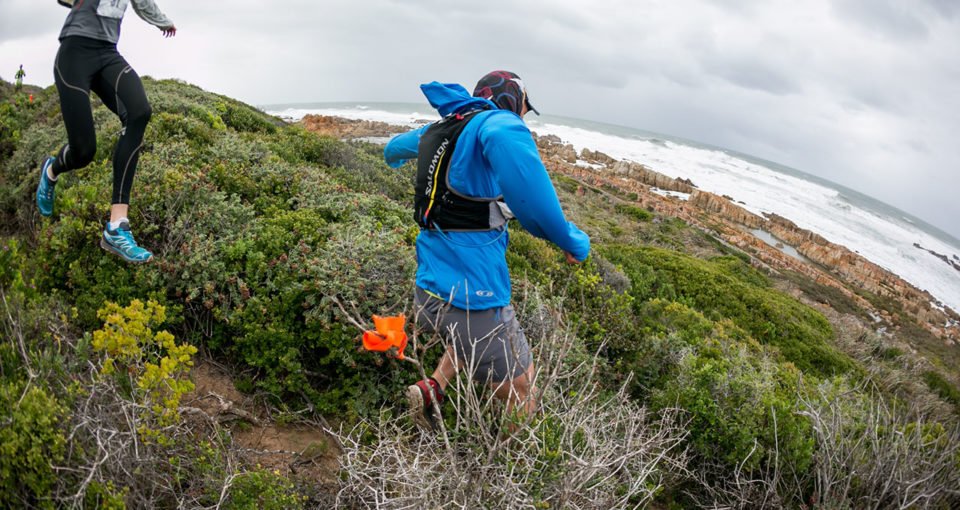 With a raft of new events on the South Africa trail running calendar, Spring continues to impress enthusiasts in the Western Cape. In 2011, I had the privilege to run the inaugural Oyster Catcher 2-day trail run in the Garden Route, South Africa. You better pack your bags and head on over here, this was special.

The 2-day Oyster Catcher Trail Run was held at the end of September between the two coastal towns of Gouritz River Mouth and Mossel Bay, and covers about 38km of beautiful trails along beaches, dunes and the world renowned Cape St Blaize Trail. This part of the world is also home to the unique indigenous Fynbos vegetation, only found in the Western Cape in South Africa. The event accesses trails rated by BBC and National Geographic as being some of the top hiking experiences in the world. We were in for a treat.

Day 1 of the race was relatively flat and fast, although some sandy dunes slowed us to a pace to take in the majestic views of the coastline. A rare word of thanks to them, as the beauty was something not be missed. Nonetheless, it was all systems go from the start – a 20km run has little room for a breather, littler room for error. Route unmarked, we were instructed to stay close to the seawater at all times. This was going to be easy, or so we thought. Deceiving mazes through sandy dunes forced us to bully our way through bushes and trees alike, giving me a few battle scars as I made a ceremonial blood donation to the trail.

Day 1 ended at the Sand Piper cottages in Boggoms Bay, the base of the Oyster Catcher Trail hiking tours. Awesome 4-day packages are on offer here, giving hiking groups an amazing walk, but also a learning experience about keeping this earth alive.

Day number 2. Starting in Dana Bay, with a beach section to set us on our way, the Cape St. Blaize trail was the main course on the menu for the second and last stage. The flatness of day 1 should be forgotten, for we have been told this day will be much more challenging as the technicality on the route increases, as well as a couple of hills to humble us after day one’s triumph. Boy were they right. Scrambles up and down rocky slopes, and a couple of staircases which I would’ve loved going down rather. The undulating hills made the last day tiring, but the Cape St. Blaize trail is an absolute gem. I was also relieved to find less sand on this trail. All the hard effort of the day was overshadowed by the pristine beauty of the surroundings, yet again. Running on the cliffs of the escarpment, looking down into the aqua-blue ocean some 100 feet right below – this felt unreal.

Running towards the end, entering Mossel Bay, a sadness overwhelmed me as 2 days of fantastic running came to an end. Friendships made while doing what we love made me wish this was more than just 2 days. The race is a must for anyone passionate about running on trails and enjoying nature. Runners are limited to only 100 participants next year, so you’ve been warned. And trust me, you don’t want to miss this.