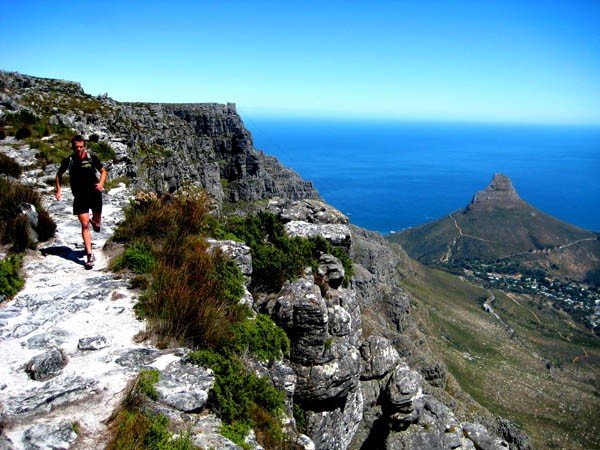 For any visitor to Cape Town, a pilgrimage to the the top of Table Mountain is a must-do during a stay in the Mother City of South Africa. The main way to hoist yourself from the bottom to the top of the mountain is via the cable car, which takes hundreds of thousands of people to the flat top of this prodigious mountain each year. However the best way to make the summit is to avoid the crowds by discovering the less trodden pathways that wind their way up the Mountain.

Ultimately more rewarding, these routes offer a different perspective from the summit’s birds-eye view. Each year the Table Mountain Challenge takes a merciless route along these paths over 38 kilometers of terrain. This year I took up the opportunity to race after doing a couple of smallish events on the big rock above the Atlantic Ocean. Here’s a blog about my experiences on the route in which I’ve included some alternative options and a route map.

At 7am on a warm Saturday 17 September 2011, we were off. Divided into 3 legs, the clockwise route first took us to Kloof Neck, where the lower station of the cable car is positioned. The first leg served as an 8km warm-up along a stretch of moderate jeeptrack. This part of the race took participants across the front of the Mountain along a route that flaunted spectacular views over Table Bay and the infamous Robben Island. Although we only had to deal with a gravel road during this section on the day, there were numerous exciting trails hidden further up.

Using the upper contour path about midway up the face of the mountain as your arterial route, choose any of the many footpaths going to and from this flattish trail. My personal favourite option is to take the steps from Kloof Neck to the upper contour path, and run across the face of Table Mountain to Devil’s Peak. When we reached this very peak beneath the contour path during the race, it signalled the end of the “warm-up” leg at checkpoint 1, and the start of some serious fun in the Newlands forest.

Newlands, renowned for its vast network of exciting forest trails, is the playground for children at Table Mountain. During the race we ran the trail known as the ‘upper contour path’, missing out on the x-rated forest trails hidden below which are my usual preference for an adrenaline fix during training. The trails below the race route offer a mixture of route options and terrain diversity.

The second leg of the race included a fast 12km through the forest, with a total elevation gain of about 700m at anaverage slope inclination of 10.2% (this is just one small part of the forest). As we exited the forest, it was time for some refueling – I called on my trusted race diet of bananas and baby potatoes. It would serve me well, as the race designers definitely kept the best for last.

Llandudno Ravine was the next section and almost so tough as to be unmentionable. This haunting section of the race forced runners up 510m in about 2km at an average slope of 22.4%. The maximum slope of 46.7% had me cramping. What made this climb so cruel was the fact that it was thrown in our faces after some 25km of running. Pacing was crucial.

At the top, refueling was priority number one. Bent on getting the electrolytes flowing again, I was uncertain whether I had refueled sufficiently. Fortunately the prospect of what lay ahead was exciting. The organizers dished up the famous Twelve Apostles – a series of 12 peaks – as the treat for the last 10km. The technical and thrilling trails on the top of the mountains were amazing, generating that extra bit of energy I needed to complete the race. It was unthinkable that the metropolis of Cape Town was a few kilometres away; We had transported ourselves into the heart of nature and were running on top of one of the most famous mountains sequences in the world.

The Twelve Apostles section was a continuous undulating affair, a scramble at times. Considered a ‘flat’ part of the race, this 5km stretch had a total elevation gain of about 650m, at an average slope of 11%. The race made its way towards the Hely-Hutchinson Reservoir, where we started the steep descent towards Kasteelspoort. The Miami-like Camps Bay below was a welcoming sight – the end beckoned. After this steep downhill – which had my adrenaline valve working like a piston – the final contour path towards Kloof Neck treated the runners to a fun single-track known as ‘The Pipe Track’.

After 38km of true trail running we had run around Table Mountain. This circular loop around the big rock is one of the many options you have. There’s Skeleton Gorge which takes the runner from Newlands Forest up the mountain to the Hely-Hutchinson Reservoir. From the reservoir numerous options can be chosen. There’s also the option of running on the very top of the central Table Mountain. To get there, climb to the top via marked routes, or simply hop into the cable car and save your energy for routes on the tabletop.  Take a look at the race movie to get an idea of what this mountain has to offer.

That takes care of our most famous mountain. But bear in mind, Table Mountain is only the beginning of a network of mountains and trails that wind their way up the Western Cape for miles.