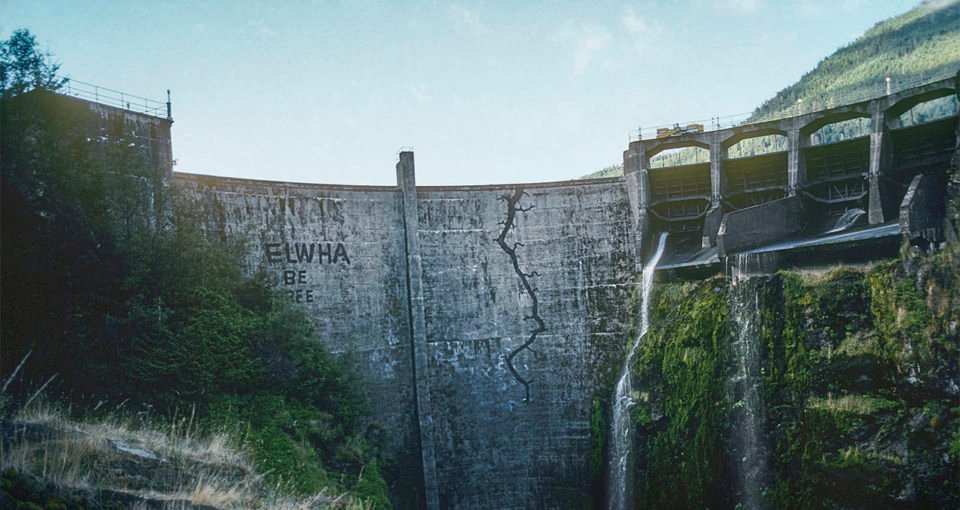 Conceived in 2011 by Matt Stoeker and Patagonia founder, Yvon Chouinard, feature-length film DamNation tells the story of the United States’ overwhelming record for damming rivers over the past 130 years. The film combines archived footage and first-hand accounts with the latest research on the impact of the country’s 80,000 dams, sculpting a narrative that resurrects one of the most primeval debates of populations – that of the power of waterways.

The film opens with a recording of F.D. Roosevelt in 1935 celebrating the Hoover Dam, a script that heralds the modernization of the region and praises an engineering victory brought about by American resourcefulness, skill and determination. Booming out of the New Deal during the Great Depression, the Hoover Dam was one of the most symbolic projects in the recovery from a spiralling economy. Quite symbolically, the surrounding Arizonan and Nevadan geography mirrors that chaos of the downturn, now conquered and tamed by the 726ft dam.

“10 years ago, the place where we are gathered was an unpeopled, forbidding desert. At the bottom of the looming canyon whose precipitous walls rose more than 1000ft flowed a turbulent, dangerous river.”

During the following 20 years, the Army Corp of Engineers, Bureau of Reclamation and Tennessee Valley Authority heaved ahead with the construction of dams, 30,000 between 1950-1970.

Narrator Ben Knight of Felt Soul Media introduces himself early, moving the history of dams through atrocities, their incredible proliferation during the mid-Century and how, by 1995, the promise of damming had run dry, much to the pleasure of punk radical activists like Mikal Jakubal and Ed Abbey. During the Clinton administration, the Pacific Northwest’s Elwha Dam was signposted as one of the first major dams to be removed, a plan that set in motion during the filming of DamNation.

Wild fish act at the centrepiece of the film – salmon and steelhead – incredible species that can still be found trying to return to their ancient spawning grounds, hammering themselves again concrete in the process. Further, the shortcomings of fish hatcheries are also made clear – inbreeding a species out of existence is no way to deal with these ‘mountain climbers’.

Writing in September 2011, Stoeker describes the crippling role of dams for salmon populations.

“Flashes of torpedo-shaped fish shot by my head through the chalky blue water of the Elwha River. Underwater, I can hear and feel the powerful tail fins kicking past my head. Several dozen 20- to 30-pound Chinook salmon impatiently circle me and my underwater camera in this confined and stagnant pool. A concrete wall appears before me and rises from the bedrock bottom, stopping my forward movement. I float up the face of the worn structure towards the growing light 10 feet above and pass groups of juvenile steelhead and large bull trout similarly unable to continue upstream. My dive mask breaks the surface; I stare up at the silhouetted and ominous Elwha Dam.”

DamNation does well to link the story to enchanting and creative stories of humans beside running water. Before Floyd Dominy’s Bureau of Reclamation put in place Glen Canyon Dam, archaeologists made their way into the area to retrieve the remains of a civilisation that abandoned the site in 1300. The uplifting story of Katie Lee with friends Ted and Frank, scrambling around through Forgotten Canyon to Daughter’s Switzerland marks one of the high points in the film.

“We’d actually hear speaking in the wind sometimes, you’d go around the corner  – and everybody hears a whistle now and then but no – I heard more than whistles and I just said, there’s something queer about this place. Maybe it’s scary, at first it was and then I thought, no, there’s just something here that’s supposed to be part of me.”

Watch the trailer and purchase the film on Vimeo and iTunes.