Review of the CamelBak All Clear Water Bottle 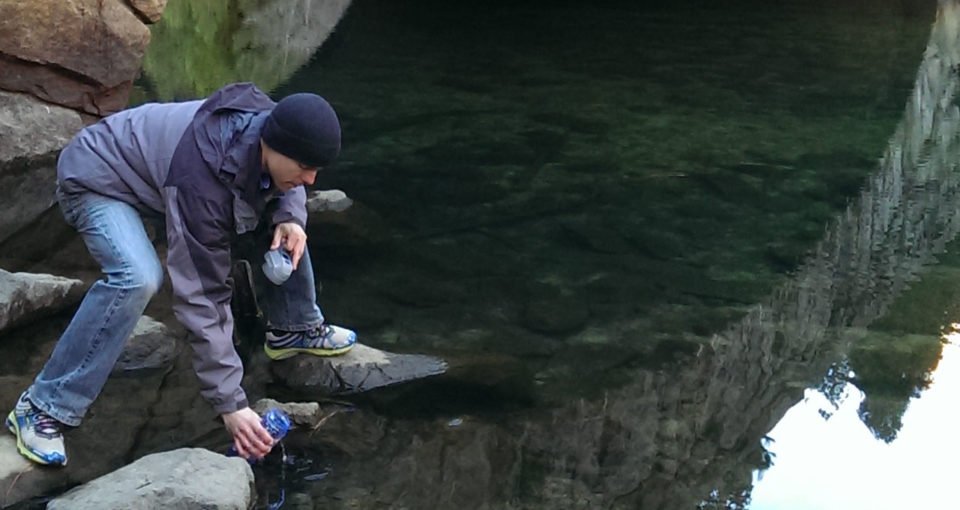 When I first got my hands on the CamelBak All Clear water bottle, my mind immediately wandered to visions of backcountry camping, pulling sparkling water from mountain lakes and gulping it down, still ice cold, yet Giardia-Free. At this point, I had not yet cracked the seal on my new toy, but seeing the CamelBak logo I was positive that I would not be disappointed.

Known for their lineup of innovative hydration products, CamelBak literally re-invented the hydration paradigm with the original water-bladder backpacks in the 90’s and have been the leader in that field ever since. Rather than thinning out their research and development over a large spectrum of gear, CamelBak has maintained its purists roots by focusing exclusively on what matters most: water. All the design is done in-house rather than the re-branding that has become commonplace in their industry. As I held my new All Clear in my hands, needless to say, my expectations were astronomical and as you will infer from the following report, I was not let down.

The CamelBak All Clear is an elegantly simple water purifier which utilizes Ultra Violet (UV) light to kill 99.9% of harmful bacteria. This system is more effective than Iodine tablets or charcoal filters, without any of the unpleasant taste or eerie coloration. Historically there were a handful of problems preventing UV purification from becoming the unanimous solution for backpackers, all of which have been fully addressed by the All Clear. The first issue with UV purification is that it requires batteries which eventually die and were generally considered unreliable. The All Clear holds a lithium ion battery capable of sterilizing 80 cycles, equivalent to 16 gallons of water, between 4-hour charges via a USB connector. And if you are worried about whether your All Clear will last for your entire trip, keep an eye on the simple LED display monitors battery use as you go. With the All Clear you are almost guaranteed to have limitless clean water for everybody. The All Clear UV bulb will run 10,000 cycles which is the equivalent of 2 (750 ml) bottles per day for over 13 years. For the average backpacker this will last a handful of lifetimes.

The second concern with UV systems is size and portability. Since the All Clear is integrated into the cap of its own water bottle, that really is not an issue at all. It just makes sense to integrate the UV system with the bottle, you’ll never misplace it again. Furthermore, you get a tight seal between the UV system and the bottle producing easily quantifiable and reliable results; no need to gamble with your drinking water. The active lid is only slightly taller and heavier than the standard lid (also included) and comes with a clean neoprene carrying case if you do decide to leave it at camp.

When it comes to ease of use, you couldn’t make a device any easier than the All Clear. Just push the start button, agitate, wait as the LED display counts down from 60 seconds, and enjoy. Really, that’s it. There’s only one button, just push it. The bottles are BPA-free and the polycarbonate material in the bottle blocks all lightwaves up to 400nm (all UV light produced by the cap), so even though you can “see” the UV lighting element, only the non-damaging visible spectrum is making it through the bottle and onto your retina. Feel free to gaze in awe as your water is purified in front of your eyes, you won’t develop cataracts.

The retail price is just $99 including the bottle. That is the price for all the clean drinking water you will ever need, and the piece of mind that you will have it when you need it. CamelBak, you did it – You have solved the problem of potable drinking water for backpackers everywhere, but what you have also done is opened the door for further innovation making the possibility of clean drinking water feasible for billions who are in need on a daily basis. If this device could be scaled and distributed appropriately, it would have the potential to save thousands of lives worldwide. CamelBak has not overlooked this humanitarian potential and I expect this and similar technologies will quickly expand, redefining how the entire world can access drinking water.

Craig Fellers is based out of Santa Cruz where he is the owner and optometrist at Midtown Optometry.