Research into Effect of Mountain Bikes on Seed Dispersal 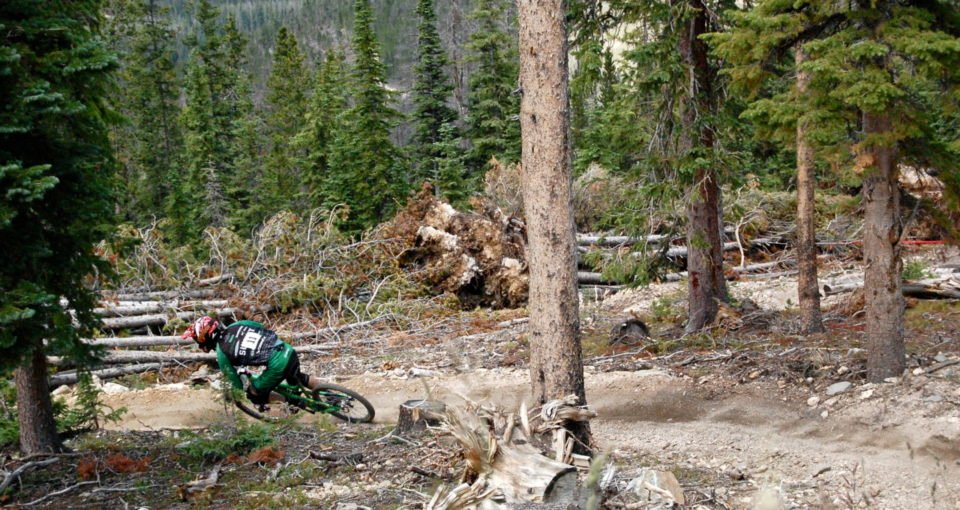 The growth of mountain bike parks as permanent pieces of infrastructure brings to questions their ecological impact. Since tracks divide different parcels of land, the question of seed dispersal and natural systems is brought to mind. Back in September 2014, Fabio Weiß of Universtiy of Freiburg published research which looked at the role that mountain bikes have on seed dispersal in the southern Black Forest.

Between June and August 2014, Weiß monitored a forest trail on the outskirts of Freigburg, choosing a point on the northern side of the Kybfelsen (820m). The trail leads through managed forest and with a small variety of trees including Beech (Fagus sylvatica), Douglas fir (Pseudotsuga menziesii), Spruce (Picea abies), Fir (Abies alba) and Scots pine (Pinus sylvatica). The trail was slightly sloped and held a mix of different surfaces common for trails in the area. It featured hardpack, partly lose soil, coniferous litter, broad-leaf litter, small amounts of gravel and stony passages.

The bicycle was ridden with a speed between 10 km/h (~6.2 mph) and 15 km/h (~9.3 mph) representing average uphill speed (personal experience). The pick-up area had the size of 213cm by 50 cm; 213 cm long to allow each wheel a full rotation within the pick-up area to reach maximum exposure of the tyres, 50 cm to ensure that the rider entirely hits the pick-up area with both wheels, even when crossing it not completely straight. 12500 seeds of five species were evenly distributed in the pick up area. The seed density per species was ~0.23 seeds · cm-2, yielding a total seed density of ~1.17 seeds · cm-2.

Of the 12500 deployed seeds a mean of 301.1 (± 23.4) for semi-wet conditions and 65.9 (± 5.1) for wet conditions became initially attached to the mountain bike tyres. In one case there were 459 seeds counted.
The factor for the contact area would be 1.0, given the situation that the rear wheel exactly follows the line of the front wheel; 2.0 if it takes a completely different line. It is rather unlikely that one of these scenarios dominated during the field trials. Therefore, I set the factor to 1.5, representing a more realistic intermediate scenario.

In total, 90% detachment thresholds derived from the best fitting model were 16 meters in semi-wet conditions and 15.5 meters. 500m and 100m, respectively for last seeds.

Most of these seeds were attached to the downtube or the underside of the bottom bracket. I also discovered seeds underneath the saddle, on the fork, on the chain and the rims. Within the 70 overall runs in semi-dry conditions I counted 28 seeds on the bike frame. For the 50 runs in wet conditions there were 21 seeds found. Resulting from these figures the chance to have any seed attached on the bike other than on the tyres was 40% in semi-wet conditions and 42% in wet conditions for one run.

65 mountain bikers in survey The mean distance until the next cleaning of the bicycle is 70.15 ± 4.1 km, which equates 2.48 average rides.

The dispersal distance, on the other hand, was considerably shorter than expected in the beginning. While seeds on shoes are dispersed up to 5 km, predictive models even suggest 10 km (Wichmann et al., 2009), the seeds in my experiment reached maximum distances of 500m in semi-wet conditions and 100m in wet conditions, respectively.
Limitations of speed. Limitations of on-frame seeds

Is this long-distance dispersal – Pastinaca seed to become attached to the tyre when being exposed to it was 39.6% attach and detachment rates increased with reduction in weight.

Socks and clothing also collect – 500 sew per sock (mount and pickering 2009). Mountain bikers putting down shoe and collecting seeds
Limitations. There are many riding styles, which substantially differ in riding speeds, terrain choice and material.

One study remarks that hiking boots are able to transport seeds up to 5000m (Wichmann et al., 2009). quantifying the seed-dispersal by mountain bikes, little research when compares with clothing, shoes and cars soil erosion, vegetation damage and trail degradation (Pickering et al., 2010b). In the United States 43.3 Million people rode a mountain bike in 2000 (NSRE, 2000), aided by advancing technology which allows for greater variety of terrain and year-round riding in all conditions.