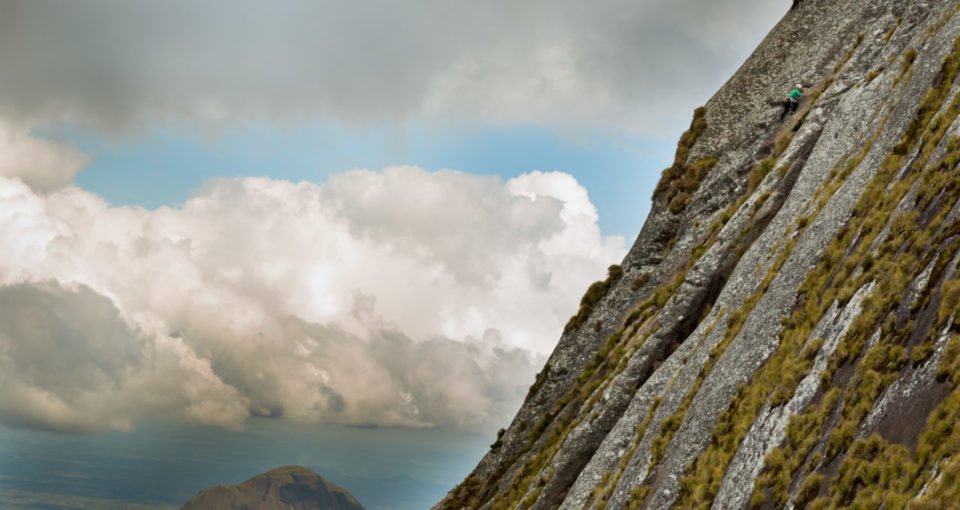 It’s not everyday that you hear of world-first rock climbing ambitions meet with scientific research on the same perilous face in Southern Africa. But for a group of professional rock climbers and international scientists, Mozambique’s Mt. Namuli set the stage for such a collaboration – The Lost Mountain project.

After four years of planning, American climbers Majka Burhardt and Kate Rutherford cited Mt. Namuli’s isolated ecosystems as a unique opportunity to help scientists interested in sampling the big wall. The scientists stated a preference for exploring a pocket of forest at 1600m and the vegetated communities that struck up from there to the mountain’s 2418m summit.

So in May 2014, the expedition got underway with the climbers making their pitches up the mountain.

After establishing the first technical climbing route on the southeast face of the mountain (Majka and Kate’s Science Project (IV 5.10-)), the two climbers connected zones of interest for the scientists. Burhardt and Rutherford fixed lines to the bottom half of their 12-pitch route so that scientists could independently access areas for sampling during the following four weeks.

Thanks to the efforts of Burhardt and Rutherford, world-renowned scientists Dr. Flavia Esteves (California Academy of Sciences), Harith Farooq (Lúrio University, Mozambique) and Caswell Munyai (University of Venda, South Africa) were given wide access to the southeast face – at one point, 16 members of the expedition covered the southeast face.

As the leader of the expedition, Burhardt was well aware of the risks involved in scaling such a fertile and flakey rockface, writing on sponsors Petzl’s blog later, “I would know better than to introduce first-time climbers to vegetated granite slabs strewn with dirt and bush-choked chimneys. But the rules are different when your mission is a mash-up of scientific research, conservation action, and the establishment of the first technical climbing route up a mountain in Africa.”

Burhardt commented on the sense of achievement in bringing two fields of expertise together.

“It was incredible to stand on the summit of Mt. Namuli with so many of our team members. Seeing 360-degrees of the majesty of the region spread out below us was the perfect realization of a four-year dream and the crazy hard work and commitment it took everyone to accomplish it.”

As well as gathering a comprehensive collections of over 3,000 different ants and 27 herpetological species, the team also carried out an integrated conservation study to establish criteria for natural resource management on the mountain. The 30-day, 18-member expedition came to an end at the village of Carruca near the base of Mt. Namuli where Burhardt, Rutherford and the scientists joined the local community and representatives from conservation engine LUPA to celebrate and share findings from the expedition.