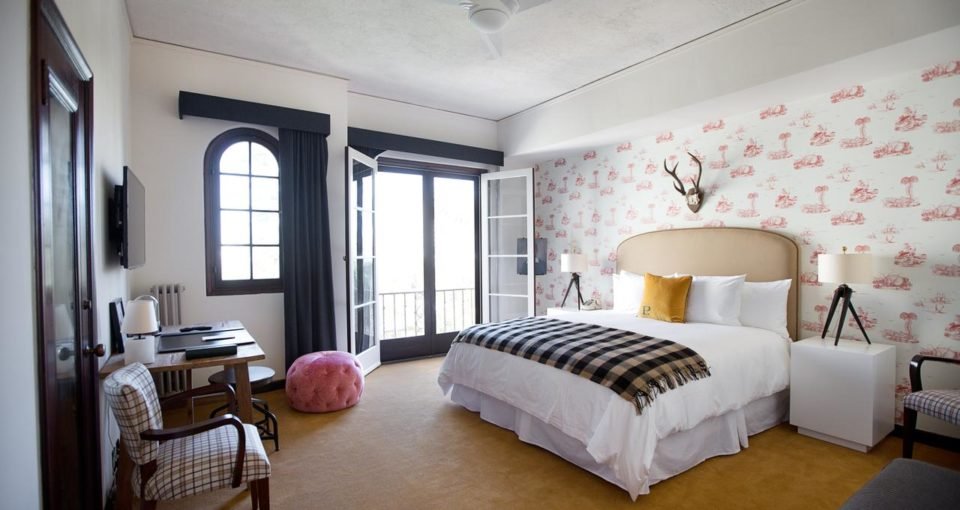 If the flavours of Los Angeles become too much, be assured that a small portion of hotels have switched out relentless cheer for a calmer, more relaxed mood. Set back on 3rd Street in Santa Monica, Palihouse Santa Monica manages to combine an ambitious location with the calm of a private home. Paligroup took control of the 1920’s era Mediterranean Revivalist building in 2013, grabbing the reigns from The Embassy Hotel apartments to make a thorough update of the venue.

Now Palihouse Santa Monica is an impressive building with 38 bedrooms, including 30 suites and a collection of studios with fully equipped kitchens. A pair of wings float either side of a central lounge area, a dimly lit atrium which acts as the hearth of the residency. Though the combination of dark furnishings on a terracotta floor form an odd synthesis between alpine hunting lodge and Spanish interior, guests can at least reside in the comfort that members of the public aren’t allowed in their expansive lounge.

Slip down the dark corridors and into the various suites and the scene starts to look very different. Bedrooms are far fresher than the moody communal areas, embracing the Californian light with large windows. Bedrooms are spacious with a careful quota of furniture, while the residency suites have fully equipped kitchenettes and yet more liveability.

With a clear focus on a calm retreat that doesn’t shock, Palihouse Santa Monica certainly sets itself aside from the bustling hubs in Hollywood and Downtown Los Angeles. Even the small lounge bar places only a mild emphasis on drinks and coffees, merely ladeling the quiet garden at the rear of the building.

Yet for some, this sober retreat provides a perfect setting for a stay in Los Angeles, especially given the location is close to healthy distractions in Santa Monica. A highlight is no doubt Rapha’s new cafe on 4th Street which has elevated the hotel’s convenience for cycling and coffee enthusiasts. The Los Angeles Marathon also finishes half a mile from Palihouse, marking the beachfront and the ease of access to one of most iconic strips of workout real estate in the United States.

Head to palihousesantamonica.com to find out more about the property.