A Guide to Wild Swimming in the British Isles 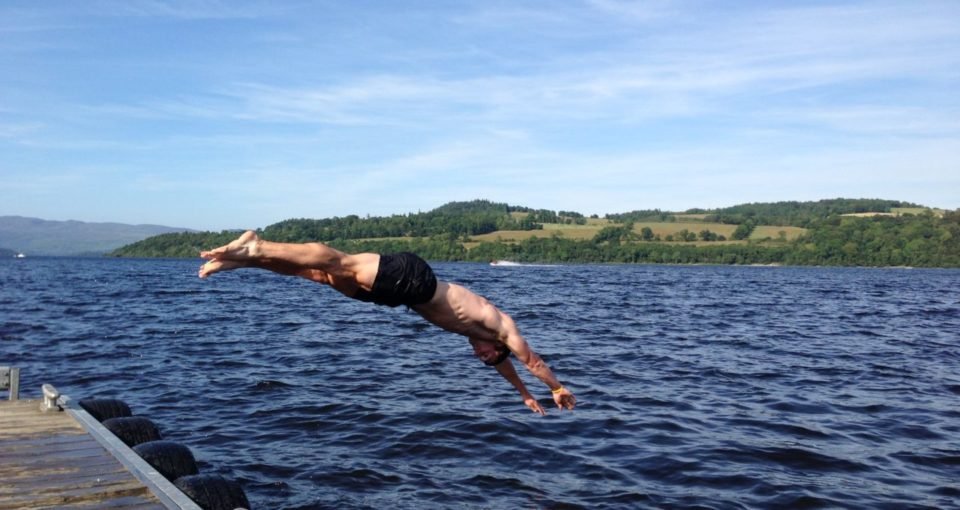 There is perhaps no better way to vent post-election stress than to explore the abundant lakes, rivers and waterfalls that fall within our newly elected constituencies. Over the last 15 years, legislation has made the UK a more welcoming place to naturists, at a time when swimming in the wild has risen in popularity for its health and social benefits.

In 1999, Roger Deakin published Waterlog, an immersive account of his journey through Britain’s inland and coastal waters. The itinerant Deakin sinks the reader beneath the liquid surfaces of the country, composing an argument to support our rightful place in natural waterways. Challenging any health and safety regulations while dipping unobserved becomes Deakin’s protocol, a viewpoint that has been inherited by a new wave of wild swimmers.

Since the Second World War, swimming in the rivers, lakes and waterfalls of the country has suffered from the overuse of pesticides and fertilisers in farming, chemicals that gradually found their way beneath the water table. Very soon a purity that inspired the imaginations of the likes of Rupert Brooke and Virginia Woolf had became tarnished by an intensive development of the British countryside.

Aware of the rising problem, Westminster eventually passed the Control of Pollution Act in 1974 to put in place parameters to reduce the amount of poisonous effluent entering streams. This legislation was updated in 1991 by the Water Resources Act to control sensitive water zones, beginning a period of revival for Britain’s natural waterways.

If you’re already well beyond your 12th birthday and haven’t yet made the plunge, fear not, plenty of adults are out there doing it. In Scotland, inland waters are open for business, so long as you obey the Outdoor Access Code. In England and Wales an extensive ‘right to roam’ has been in place since the Countryside and Rights of Way Act (2000), supported in particular by National Parks, the Forestry Commission, Wildlife Trust and National Trust.

As for logistics, Daniel Start’s Wild Swimming couldn’t be a better guide. The book provides a fountain of knowledge on the activity, including the location of 300 prime spots across England, Wales and Scotland. It also organises lists of waterways that are best for padding, for literary swims, for skinny-dipping and those that are most accessible by train, or for a picnic. As for water quality – this is regularly monitored by the Environment Agency, and is updated in a map.

Some advocates for wild swimming have gone further than merely using the water for recreation. An import from the States, activist feature-length documentary DamNation has prompted a greater interest in dam removal, the reopening of rivers for wildlife and the importance of waterways for human recreation. With the film’s backer, Patagonia, now bolstering its stake in European environmental affairs with a raft of new hires, we’ll no doubt see similar activities in waterways near to where we swim.

If radical dam-busting activity isn’t enough cause to celebrate the skinny-dipper leaping within you, also note that swimming regularly in cold water has been shown to have health benefits in reducing blood pressure and cholesterol while inhibiting blood clotting and increasing fertility.

Swimming in open water takes the sport back to its original form and provides an exhilarating twist for the casual or experienced swimmer.  It offers the swimmer a chance to explore nature from a new perspective, provides a more far exciting alternative to lane swimming and is a great way to exercise out in the fresh air.  There are a wealth of rivers, lakes and coastline in the UK ready for exploration for those swimmers with a sense of adventure. Although open water swimming is meant to be raw and straightforward, there are some things to know before you dive into the deep.

While no more than a pair of trunks is needed (if that) to enjoy an open water swim, those looking to get into the sport more seriously might consider a range of kit.

Goggles: A good pair is essential to ensure a comfortable and more enjoyable experience. Wider goggles are better suited to the open water. If you swimming in the early morning or the evening try to get a pair of reflective lenses (see the Blue Seventy Nero Race for example).

Swimming cap: a substantial amount of body heat is lost through the head, making a swimming cap key for those cooler open water swims.  Latex, Lycra, and silicone caps are available on the market.  While all do the job, the slightly pricer, more durable silicone caps that will be sure to keep your hair dry are recommended.

Wetsuit: a wetsuit does more that just keep the body temperature up. It also provides added buoyancy and streamlining, making for a faster and often more satisfying swim. It is important to get a swimming wetsuit which will have added flexibility for the arms and shoulders, as opposed to a general water-sports one.

Ear plugs: ear infections are common for regular swimmers, and cold water can be especially uncomfortable for some swimmers’ ears.  Ear plugs provide a way to avoid these issues, with re-usable silicone and wax products available.  Some swimmers also find dizziness and motion sickness a problem with open water swimming.  Ear plugs can reduce the chance of this happening.

For most, sea swimming while away on holiday provides the first taste of  open water swimming.  However, don’t be fooled, coastal swimming is often a tough introduction to the sport with some dangers to be aware of.  Waves, the cold, tides and jellyfish can all add up to make coastal swimming challenging for even the strongest swimmers.

While any coast can be tackled, swimming from one coastal town to another can be particularly rewarding.  Thorpeness and Aldeburgh are two picturesque towns in Suffolk, separated by a mile of coastline. Swimming from Aldeburgh Town Hall to the Thorpeness Country Club is a nice route, although be sure to check which direction the current is going and swim with it!

A slightly longer town-to-town swim is from Putsborough to Woolacombe in Devon.  This two mile stretch of coast is frequented by surfers in the winter months, but makes for a lovely swim on a warm summers day when the sea is at its calmest.

There are numerous lakes and lochs in the UK that are often perfectly calm and ideal for taking on. Highlights include:

In the heart of central London and the centre of Hyde Park is the Serpentine, which has a small rectangular swimming area open to the public.  It is open between 10am and 5.30pm in the Summer, and costs around £5 for non-members.

A slightly larger open water oasis can be found up at the Hampstead Heath Swimming Ponds in North East London.  There are three ponds, one for men, one for women, and a mixed pond.  The best way to get to the ponds are to go to Kentish Town tube and then take the C2, 214 bus.

Just off Junction 13 of the M25 is Heron Lake which runs open water sessions from the end of April until mid-September. One session costs £5 (£40 for 10 sessions). You can rent wetsuits at the lake.

For those wanting to take the sport that little bit further, the Great Swim Series is a fantastic way to get into competitive open water swimming, with summer events held in Suffolk, London, Windermere, Strathclyde and Salford Quays.

Check out the Outdoor Swimming Society for more advice and and events.