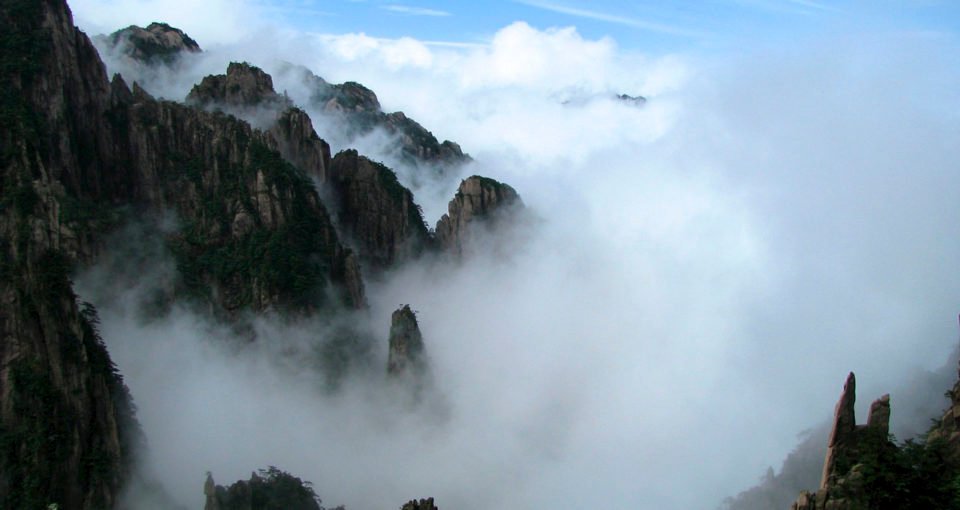 Jagged granite spires and gnarled pines breach the sea of misty clouds as tourists elatedly snap pictures of Anhui Province’s showpiece. Mt. Huangshan, translating to Yellow Mountain, is not only the subject of many ancient Chinese stories and paintings but also has become one of China’s must see destinations. The otherworldly views that once attracted poets and painters have now led to the increase of tourism and the development of this region. Drawing inspiration from the peaks barely visible through morphing clouds, James Cameron allegedly based the famous Avatar environment of Pandora from this very terrain. Being one of the most easily accessible mountains I’ve ever dealt with, Mt. Huangshan extends the pleasures of high alpine exploration to those who would ordinarily not be able to experience them.

Once in Tangkou you must decide what route you wish to take to the summit. After an excessively steep Y200 entrance for the park you have three basic options.

This is the short difficult way to the summit. Well-made 7.5k  steps carved into the mountain take a fairly direct path through the jungle-esqe atmosphere occasionally leveling out at a water/food stand. Leaving Yungu station this route climbs nearly 1000m to the White Goose Ridge. Prepared to be humbled for this is the path used by employees for ferrying food and supplies to the hotels at on the summit (I passed a man carrying two dead pigs on a yoke). Overall this should take about 2.5-3 hrs and be sure to keep an eye out for the ancient steps occasionally visable along the side of the path.

This is the much longer very difficult way. My recommendation would be to ascend the Eastern Steps and take your time sightseeing while descending the Western Steps. This path will take you around 7.5- 9 hrs to complete when ascending and about 3hrs descending but will allow you remarkable views of geology as you will be against one of the many sheer granite faces that this area is known for. The descent starts starts at Flying Rock outcrop and will take you over Bright Summit Peak before filtering through Gleam of Sky, a narrow fissure in the granite that squeezes guests into a single file line before the actual descent begins.

On your way down you will have opportunities to summit Lotus Peak, Lianrui Peak, and my favorite summit, Heavenly Capital Peak with it’s long reaching and unique views. As with many places on the mountain young couples brings “love locks” to forever lock on the chains to signify their undying devotion to one another.  Continuing onward however you may choose to either wait and take the cable car down the rest of the way or continue hiking to Mercy Light Temple and the impressively luxurious Hot Spring Area located at the Best Western.

This is the short and easy way to the summit. For about Y80 a twenty minute ride will transport you mostly to the summit and is the cause of the current tourist influx that Huangshan has experienced. This route is so popular that the wait for these cars often exceeds the time it would take to ascend the eastern steps. The Eastern Yungu Cable Car will take you almost entirely to the summit while the Western Yuping Cable Car will only deliver you halfway up the Western Steps for those yearning for a healthy mix of line waiting, physical exertion, and mind melting views. The Yuping car will deliver you to the famous, yet somewhat disappointing Welcome Guest Pine. Over the years this tree has been the symbol for Mt. Huangshan and has most likely been photographed more than any other point on the mountain. All these expectations have seemed to take a toll on the poor old tree for it’s extended “welcoming limb” is now held up by cables and various supports.

The views on Mt. Huangshan are some of the most coveted amongst photographers and explorers alike. The atmosphere created by the clouds whirling and morphing in the valleys at the foot of large granite spires evokes a ethereal sense of amazement. Such a landscape does not often escape the movie screen or our imaginations on such a literal and grand scale as it does in the cloud “seas” of Huangshan.

Just before dawn clouds fill the basins of this mountain as if awaiting to be painted by the rising sun. Sunrise is famous for possibly catching this staggeringly beautiful event commonly watched from either Jade Screen Peak, Lion Peak or Refreshing Terrace both less than a ten minute walk from the Beihai Hotel. From this point you can also see one of the most infamous and bluntly named boulders on the mountain, Monkey Looking over the Sea of Clouds.  Though often crowded, Beginning to Believe Peak offers a jaw dropping views but can be disturbed by the aggressive photographers that seem omni-present.

The dramatic West Sea Gorge trail descends into the mist that forms beneath the Cloud Dispelling Pavilion and guides you through some astounding viewpoints. Because some points on this route prove to be surprisingly exposed, tour groups generally avoid this area and other visitors can breathe a sigh of relief. Round trip will take you about 4hrs and should be avoided by those who are scared of heights or looking for a leisurely hike.

For Sunset head up to Guangming Peak or Purple Cloud Peak and look west as the sun disappears over the vista highlighting the sky against the darkening peaks and the fog inevitably rolls in.  There are a myriad of different approaches and options one can take when visiting Mt. Huangshan but avoiding the crowds is the key to a successful trip. The views are truly remarkable but they are only enhanced when you are not elbowing for room amongst other tourists.

This area has some of the highest terrain in this portion of the country; The prices seem to follow suit. There are many “four-star” options on the summit but be warned that the quality is what you would expect to find on top of a mountain. Most items in the hotel had to be ferried up by people and the standard rooms are small and pricey but clean. Ideally though any trip to Huangshan includes at least one night on the summit to get the full experience.

Huangshan Gongshangsou- Located behind the Bank of China (yes there is a bank on the summit) these dormitories will cost around Y150 per night and they also have tents available for around Y120. Be warned however there is no English sign and the quality of the dorms varies dramatically so please inspect them before committing.

Xihai Hotel  This four-star accommodation is located directly beneath Danxia Peak and has 24hr heat and hot water. The rooms are small but the bathrooms are clean. There is an restaurant on the first floor and the waitresses speak good English (rare). Rooms range are about Y1080 a night in weekdays and Y1380 on weekends during peak season. Down jacked are provided for sunrise hunters

Beihai Hotel- Another four-star option this is one being more crowded and noisier hotel but the best equipped on the peak. It has a cell phone charging station, hot dog vending cafe, restaurant, and money exchange point. It also has a great position to view sunset from the front deck of the hotel and is adjacent Refreashing Terrace and Red Cloud peak. Down jackets also provided.

Getting to Mt. Huangshan

Mt. Huangshan is easily accessible by bus from any adjacent major city. There is a major distinction to be made, however, between Huahgshan city (Tunxi) and Huangshan mountain (Tangkou). Buses leave from Tunxi every hour between 6am and 5pm and take about an hour with a train also available. Daily direct buses also run between Tangkou and Shanghai (6.5 hrs), Hangzhou (3.5 hrs), Nanjing (5 hrs), Wuhan (9 hrs), Jiuhua Shan (2.5 hrs), and Hefei (4 hrs).  These are all fairly cheap and will drop you off in close proximity to the entrance of the mountain.