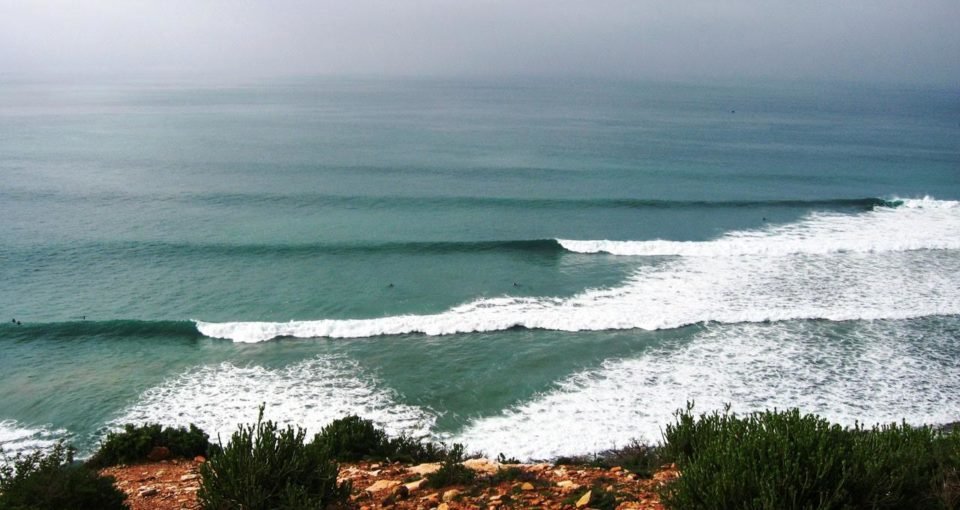 A long way from the cold and miserable British winter, yet considerably closer and more economical than its Southern Hemisphere alternatives, Morocco is the perfect destination for the hibernating surfer.

It is not hard to convince a surfer to go to Morocco. The facts speak for themselves: Reeling right-hand point breaks, a subtropical climate, cheap living and vibrant culture all make for an unforgettable trip. Ask anyone who has been surfing in Morocco and you’ll soon be hearing about all-time session after all-time session.

The heart of the Moroccan surf scene is a small fishing village, the legendary Taghazout. Roughly 40 minutes taxi ride from Agadir train station, it is easily accessible from most European capitals. The village’s main attraction is its location which is within walking distance of a number of top waves and a good starting point for longer trips. The various waves in and around Taghazout cater for surfers of all abilities with sandy bottomed beachies perfect for beginners and challenging rocky bottomed points and reef breaks for the intermediate and advanced surfers.

Anchors (or Ankas) is the most famous break of all, named after the ruined anchor factory on the headland. With the ability to hold huge swells, its green glassy walls peel for over a mile to justify its reputation. Because Anchors is so close to Taghazout, the water can get busy so get there at dawn if you don’t want to wait for waves.

Just north of Anchors are the Mysteries and La Source reefs, both best at high tide. Bear in mind that Mysteries is more likely to be crowded because of its proximity to Anchors whereas La Source is rarely that busy.

Tearing down the next headland to the north is a wave called Killers, named after the Orcas sometimes sighted off the point. Here you have the choice of a 20 minute paddle out or a tricky rock jump. The wave is worth it. This is the swell magnet of the area, always bigger than Anchors, and normally less crowded: the extra distance from town and the long paddle tend to keep people away.

Further up the coast again you can’t miss Boilers, which is visible from the road: its defining characteristic is a huge ship’s boiler in the shallows near the point. Best at low-tide, this is a wave for experienced surfers with heavy, fast walls. The pitted rocky bottom makes entry and exit pretty tricky when it is big, and the paddling is unpredictable and stressful at times due to the amount of water moving around.

In Taghazout itself are Hash Point on the north side and Panoramas in the south: two more right handers, each with a good option if you can’t face the walk to Anchors.

Just next to Panoramas, again right on the south side of the village is a long beach break which is perfect for beginners. Boards can be rented from surf shops in Taghazout and the 50m walk makes this a quick and easy surf.

On the headland halfway between Taghazout and Aourir is Tamraght, a tiny fishing village with three exceptional waves. The first is called Devil’s Rock, a good beginner’s wave with a sandy bottom. Look out for the fishermen on the rock and take the chance to buy some fresh fish. On the southern tip of the headland breaks Banana Point, a heavy racing right which can take you all the way into the beach on a good day. The third wave, on the southern side of the headland, is Banana Beach that’s a good one for beginners.