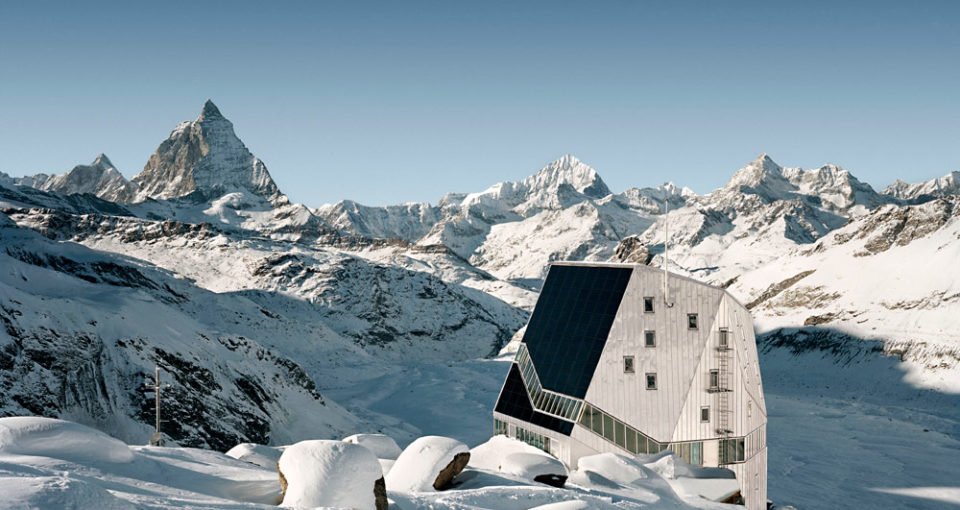 Nestled on the foot of Switzerland’s highest peak at 2883m above sea level stands the Monte Rosa Hut, a high altitude lodging that’s home to a number of brilliant innovations that celebrate Swiss architectural ingenuity. Designed to replace the last of a legacy of mountain huts built on the same spot overlooking the Grenz Glacier and famous Matterhorn, its purpose is to provide shelter for alpine climbers. The hut is capable of generating 90% of its own energy making it the most energy efficient mountain hut in the world.

Designed in a collaboration between the Swiss Alpine Club (SAC) and ETH Zurich, the 6.5 million Swiss Franc building is an energy saving, energy creating masterpiece. First of all, the building’s exterior has been built without the use of a single 90-degree-angle, minimising the surface area of the building and therefore the overall heat loss.As part of an experiment in high altitude eco architecture, the energy flows around the hut are so complex that they have to be constantly regulated by a computer at Zurich University.

Meanwhile, electrictiy is generated by 120sq m of exterior solar cells and panels that supply utilities in the communal dining room, kitchen and washing facilities. Water is obtained from snowmelt and stored in a reservoir 40m uphill from the hut. Any excess electricity is stored in batteries while used water is purified and then re-used to flush the hut’s toilets.

Up to 650kg of supplies are flown up to the hut in order to meet the needs of its two set menus. On its return journey it removes litter and every three months, solid refuge that the grey water system hasn’t been able to treat.

According to in-house manager Brett Macdonald, the development of the Monte Rosa Hut arose primarily in response to falling Swiss Alpine Club memberships over the last 10 years. It appears that the green aspect of its design was just as much about making the structure an attraction as it is about conserving energy. Never the less the initiative has certainly paid off; The hut is very busy, attracting many non-climbers who make the hut the goal of their trips. The hut promotes energy efficiency and conservation on a series of information boards down stairs aimed at directing people to see first hand the state of the Gorner Glacier which has fallen 150 metres in the last 10 years.

For those well acquainted with mountain bothies in the UK, the Monte Rosa something of a treat.  As part of the collection of Swiss Alpine Club refuges, Monte Rosa offers not only beds and linen, but the option of breakfast, lunch and dinner, wireless internet and even a shower.

If anything the Monte Rosa Hut is more luxurious then other mountain huts in the Swiss Alpine Club’s system. Sleeping quarters for up to 110 people are reached via a spiral stair case that offers panoramic views on the final ascent to bed – a nice touch at the laziest of times. The sleeping quarters themselves are ventilated to deal with climbers who have forgone the option of a shower for a small fee of 3 CHF.

One night at the hut costs 24 CHF per person. Breakfast is a further 15 CHF and a three-course dinner another 24 CHF, both requiring in-advance bookings. Considering the grandeur and location of the hut, we thought this remarkable value for money considering you could easily pay this much to stay at any ordinary travelodge in the UK. The lodge doesn’t reduce the rate for longer stays which could be an issue for anyone looking to stay for prolonged periods in the mountains to avoid fines for illegal camping in the Swiss Alps. As a comforting, token beers are sold for the price of 4 CHF which is a lean sum for Swiss standards.

The hut is open from June (opens 4th June 2011) and closes in autumn depending on how early colder weather comes in. Rates for non-SAC members start at 45 CHF for adults, 28 CHF for 7-18 year olds and 9 CHF for younger ones.

From Zermatt the easiest and least technical way to get to the hut is to take the Gornergrat Mountain Railway to Rotenboden, followed by a two- or three-hour trek across the Grenz glacier. The route is usually well marked and may not require crampons although all glacier equipment is advised. Other more technical routes include a steep climb from Gonergrat (the next station on the line), or via Furi and a traverse of the entire Gorner Glacier (4hrs). Although there is a one-million-CHF plan to improve the route in the coming years, it does at present remain quite arduous and will require a reasonable level of fitness.  Brett MacDonald informed us that in the last year 12 people have had to be airlifted out due to misjudging the severity of the walk to the hut so be well aware of your level of fitness and ability.

From London follow the greentraveller journey plan to get you as far as Geneva. At Geneva hop on a train to Visp and wait for the connecting mountain train to Zermatt. Buy tickets for train travel in Switzerland before you go from Rail Europe. If booked in advance a return ticket cost in the region of £90.