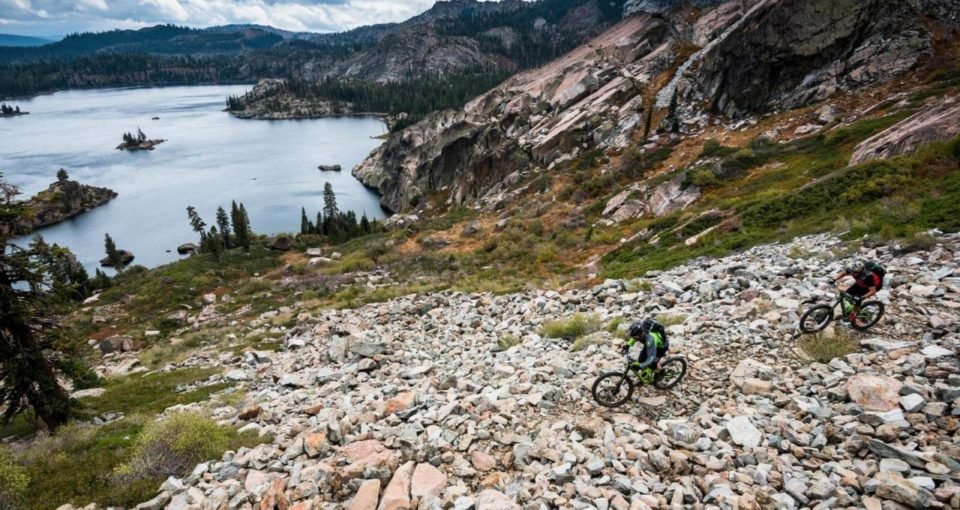 Some time has passed since the Lost and Found gravel grinder, which took place in early June. As a roadie venturing off the tarmac, I was not so sure how to interpret the jarring experience of skinny tires hitting dirt berms and washboard gravel. Should I feel sorry for my bike? (No, Mike’s Bikes was kind / stupid enough lend me a demo Diverge.) Or should I feel sorry for my weary body that will never fully recover?

Sitting here to months later in my air-conditioned office hundreds of miles from the beauty of Lake Davis, I am beginning to realise that no sympathy is warranted. This is merely the way of the gravel grinder. I was a sojourner in the world of gravel where creaking carbon, aching necks and exploding tires are as normal as Evade helmets and shaved legs on the road. At this mental juncture, I believe I have found enlightenment; let me elaborate in this narrative of my Lost and Found.

Highway 80 is a thoroughfare for the travelling bike racer. I have cursed many a driver as I sit in traffic for hours heading East towards the quieter roads of the Central Valley. This Friday is no different, except the road ahead continues onward into Truckee and then North for another hour past Satley to the rugged foothills near Graeagle and Downieville. As I approach Lake Davis, cars seem to alternate from GMC pickup to Audi with a Kuat rack, to a rusted Jeep, to an X3 with bike wheels visible through the back glass, then a Dodge Ram and so on. As the balance of brands moves further towards Germany away from American, I know I am getting close.

When I find the race venue and get around to parking, I feel something radiating from the campground. It is an energy unlike anything I have encountered in the NorCal road scene. A level of stoke or elation that I can’t quite place is contagious and as I walk to reg, and I am soon engulfed by the charisma of gravel racing.  The forest is alive with nervous chatter from hundreds of racers all contemplating the challenge that awaits.  For some this is a tick mark on a life list, for others, this is the culmination of a season of racing, but everybody is excited to put themselves to the test.

At the starting line I look around. I generally recognize almost everybody and know who will be a key player. In this unknown world of gravel, I am the stranger and I am lost in a sea of mis-matched bikes. As the gun went off, I quickly learned that riding bar-to-bar means something completely different when you are in a peloton sprinkled with flat bar mountain bikes.  You are more likely to get hooked here than in a crit with Cylance (Hey-yo!)… but in a less malicious way and by a guy with hairy legs and a big smile.

Up the first climb the race broke apart immediately. In my mind the race was essentially over only five miles in. However, my roadie mindset is completely mis-calibrated for dirt racing. As the lead group crested the climb, and my bike pointed downward, I made the responsible choice of feathering my brakes as we approached the first loose turn. It didn’t take long before I was getting swarmed by my flat bar brethren who drifted effortlessly through the turns. While I felt like I was careening down the hill at an unsustainable pace, I was soon separated from the true gravel champions. Very humbling. As the terrain flattened, I got into a small chase group including two mountain bikes, and two gravel bikes. For the record, a rotating paceline is absolutely terrifying on dirt where unannounced obstacles were a common occurrence. Almost too common. I got the distinct feeling that my mountain bike companions were taking great pleasure in ramming through the water crossings extra hard in the rockiest places to break my already wavering spirits. I do not hate them for this, but the inertia with which my bike was launched through the boulders at the bottom of the creek bed was downright alarming.

Fast forward 50 miles, way past the point where my second (full) bottle is ejected and my first bottle contained nothing but the sticky crust of drink mix and we are now officially in the middle of nowhere. This place made the quaint campground at the start line feel like New York City. It was so desolate, even John Muir would have felt lonely here. Being a generally unprepared bike racer by nature, I had no idea that the course topo was about to throw a massive climb in my face at that exact moment, and as we started up I assumed incorrectly that my roadie fitness would accelerate me to glory on the slopes of god-knows-where. But this goofy guy who barely seemed to be able to keep his bike upright kept pushing the pace. Soon only a few of us were remaining, and the hill was just as relentless as this unknown rider. To be honest, I never got to actually meet him since he dropped me like a (insert stupid bike racer analogy here) and I pedalled through the sandy trail in a pretty dark mental gloom.  One pedal stroke for me, one for the sand, one for propulsion, one for spraying sand at the zombies walking behind me. I was now officially stuck in No. Man’s Land.

Luckily, my sand-descending skills didn’t leave me alone for too long and I was caught by  some equally battered compatriots.  We suffered towards the finish line as the least graceful foursome of bedraggled cyclists trudging along at a no more than a trickle. The crazy thing is, with a race like Lost and Found, our ragged gang was still very much in the game, and were riding for 5th place. The hundreds of riders behind us must be in even worse shape than we were! That is until I got a flat at mile 91. And another at 92. And then I rode the eight slowest, saddest, most tired miles of my life to the finish line.

Historically when I see somebody lie down at the finish line in exhaustion, I feel they are faking it like a world cup soccer player looking for penalty.  Nobody could really be that tired, I had thought. As I lay there in the dirt in a daze, I was that person and I truly felt that Lost and Found deserved a red card for what it had done to me. That said, I needed to pull myself together. My friends from the Women’s team were there excited to tell the tale and live the experience that is gravel racing. A party raged around me with an amazing taco bar in which  I could barely muster interest. I know I had a long conversation with Liz about something, but my mind was still soft and out of focus and admittedly, I don’t remember the topic of conversation. I am sure it joined in the chorus of other epic tales of adventure that floated across Lake Davis from every direction. The sun shone brightly against the layer of dirt caked on my face. I closed my eyes and enjoyed last of my endorphins like an addict in that unique and wonderful state of tiredness that can only be achieved after a long hard bike race.