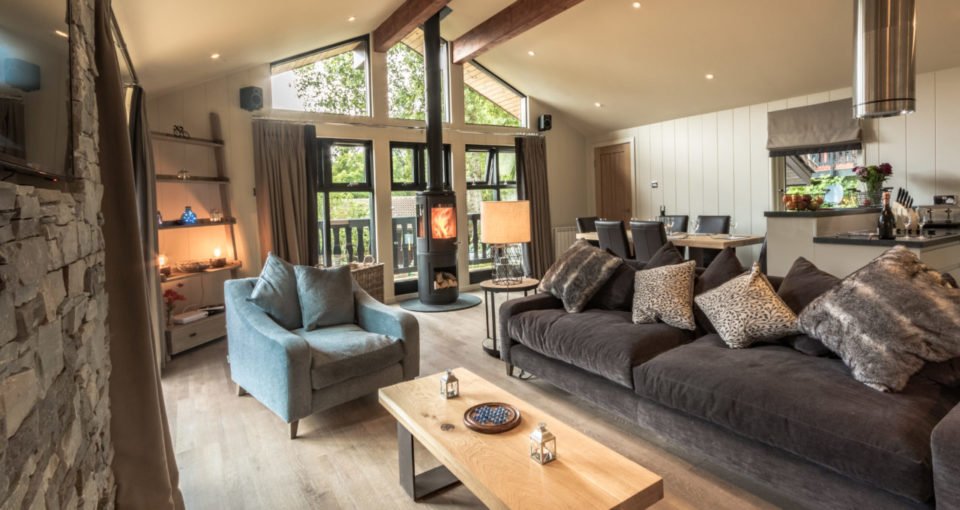 Slice a line north-west out of Edinburgh and you beam towards the heart of Scotland and the lower belly of its Highlands range. Positioned at this national mid-point, the long strip of Loch Tay reaches across the 14 miles between two small villages, Killin in the west and Kenmore on the east.

This narrow band of water provides a clear focal point, indicating the sharp relief and bursting streams that tumble down with force into this trough. As you approach by road from Sterling or Glasgow, smooth climbs encourage a continued ascent. Loch Tay Highland Lodges serves as a meaningful target, resting on the north bank, at the foot of Ben Lawers.

Accommodation options are varied, offering a range of sleeping options and experiences that blend well with the rugged landscape. Luxury lodges with full kitchen and living areas have 2 or 4-bed options. The latest update is the Riverfall Lodge (featured in the header image). Woodland cabins sleep up to six people in more simple confines, wigwams, yurts and glamping domes present a new creative slants. A new bunkhouse can also sleep up to eight people.

The Perthshire Highlands offer some excellent routes and loops in the Loch Tay area. The A85 that runs a few miles to the west of Loch Tay is, although busy, a great way to access to the north and some serious Highland challenges and to the south where Loch Tay and a neat swing back via Aberfeldy fills a good few hours in the saddle. For some exceptional riding though, follow a 60 mile circuit that runs along quiet roads through the Ben Lawers Nature Reserve. Here are some instructions from Loch Tay Highland Lodges.

Take a right out of the the Lodge and continue for 200m before taking a left that will lead you up towards a visitor centre and car park. This road winds up the base of Ben Lawers and Beinn Ghlas before heading to the west side of the mountains, along the east edge of the dammed Loch Na Lairige. After about 7 miles you arrive at a T-junction. Going left adds an extra 10 miles to the trip and takes you up to Loch Lyon and Lochan Daimh (you’ll have to double back on yourself to get back on the loop). The road up to the T-junction is fantastic and can’t have been laid more than 2 seasons ago so if you’re feeling good after the climb then certainly look to add a little extra to the trip. If at the T-Junction you take a shorter route then make a right and swing west for 10 miles before Croftgarbh where you can take a right to Fearnan and back to the lodge or continue through to Aberfeldy to add another 10 miles to the circuit. So: Shortest loop is 25 miles and longer loop is 45-50 miles in total.

You can spend a good week on the roads surrounding Loch Tay and its neighbouring valleys so think to bring your own bike if you want to take on some mileage. Bikes are available to rent from the Lodge.

To the north of the accommodation are a handful of munroes, Ben Lawers (1214m), Beinn Ghlas (1103) and An Stoc being the nearest to the Lodge. I’ve been up Ben Lawers in Autumn and in the depth of Winter, making the summit with questionable grace each time.

There is a ticketed carpark up the hill from Loch Tay Highland Lodges which takes out the bottom third of altitude from Loch level. From the car park, a summit without snow takes between and 90 minutes and two hours. Just make a decision on doing a full loop before you set out, since this will have you walking back West along the road to return to your start point.

After eyeing up a route around Ben Lawers for over two years, I eventually headed there this weekend with a couple of friends to scope out the loop.

Ben Lawers lies to the north of Loch Tay, one of Scotland’s largest freshwater lochs. Positioned in the southern highlands of Scotland, the Loch lies within a two-hour drive from Aberdeen, Edinburgh and Glasgow, offering a raft of running, swimming and cycling opportunities. With our aims set on a cycling and running weekend, we headed out for a 50-miles loop up and behind Ben Lawers, then south through Kenmore along the southern shore of the Loch before returning back to our accommodation at Loch Tay Highland Lodges.

Here is a 48-miles loop of 48.4 miles or 3,401 ft, working clockwise around Loch Tay and into some of the adjacent valley.