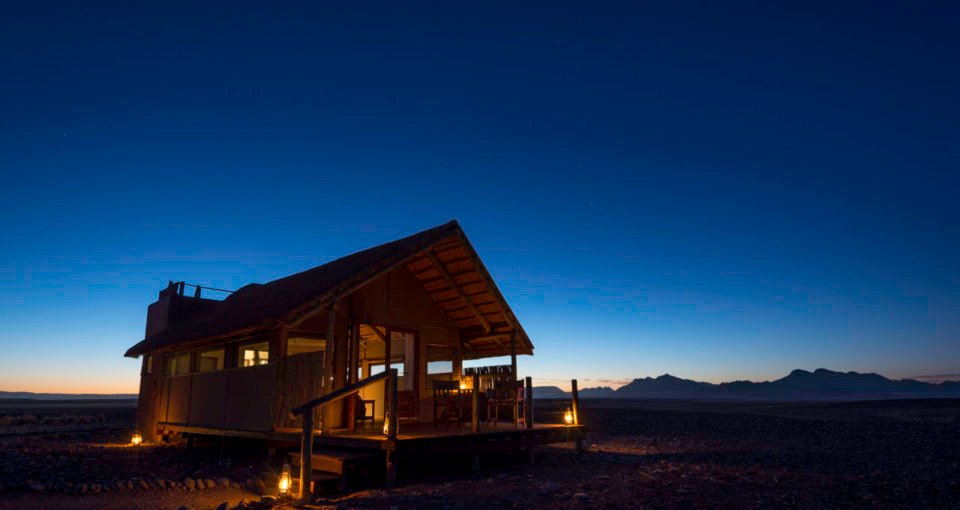 Arriving in the Namibian desert in the midday summer heat is enough to force any hardened tourist into a desperate afternoon slumber. With temperatures regularly drifting north of 40°C during January and February, stepping within Namibia’s arid interior is an ambitious pursuit possible only with the promise of a welcoming place to stay. One such shelter is Kulala Desert Lodge, a tented camp located within the Kulala Wilderness Reserve, 27,000 hectares on the border of the expansive Namib-Naukluft National Park.

Kulala Wilderness Reserve falls under the ownership and management of Wilderness Safaris, one the foremost Southern African tour operators for wildlife and conservation. Since 1996, Wilderness have returned a formerly fenced livestock farm (goats, sheep, cattle) to one of the few authentic desert experiences, maintained by a commercial backbone that adds another impressive project to their conservationist portfolio. While most of the company’s lodges are surrounded by verdant riverine, lakeside or bush landscapes, Kulala Desert Lodge holds up an impressive outpost among desperately harsh surroundings.

The Reserve itself connects with the southern tip of the renowned Sossusvlei dunes, perhaps the most quintessential desert vistas in Southern Africa. Kulala Desert Lodge looks onto the dunes over a dry river bed, bearing the gentle-stiff afternoon breeze and sandstorms. In fact, the massive Sossusvlei dunes are part of a cycle which starts in the Kalahari Desert further inland, from where sands flutter into the Orange River to then be deposited in the Atlantic on the border between Namibia and South Africa. Tides and the northward Benguela current gradually buffer the sands back to the Namibian coast, landing them at the doorstep of the Namib-Naukuft desert. From this point sands are blown with the current, over the desert toward Kulala Desert Lodge, arriving punctually for afternoon tea.

Inhabiting the desert with this sense of mild suffering represents and inevitable hardship, contrasted with the rewarding stillness of the morning and evening. A game drive around the Reserve soon reminds one of the sheer exposure of the desert, with the broad landscape scarcely broken by vegetation that the viewing of oryx (gemsbok) and ostrich is possible from hundreds of metres. Smaller mammals such as the black-backed jackal, bat-eared fox, Cape fox and brown hyaena have found a home in the Reserve, with birds such as the dune lark, Burchell’s courser and Ludwig’s bustard navigating the territory with greater ease.

Get out of the vehicle in Sossusvlei to explore Dune 45 or the more ambitious Big Daddy and Big Mama slopes to see the tracks of small beasts, including Tenebrionid beetles (darkling beetle) and the striped mouse, more comfortable protected by shrubs and out of sight from aerial attacks. A handy document, Namibian Species Checklist, is published by Wilderness Safaris in a 36-page PDF.

Further details can be noticed in the arboriculture and geology of Kulala Wilderness Reserve and Sossusvlei. Black granite rock forms part of the landscape, with weathered volcanic rocks forming the base of the large expanse of turf that is carefully carved by Wilderness’ 4×4 network. Rare acacia trees can be found in Sossusvlei and in an adjacent valley is Deadvlei, famous for its looming trees that still stand as relics from a previous water supply which disappeared 800 years ago.

Against this backdrop, accommodation for Wilderness guests is luxurious. 23 thatched kulalas reach out in two wings from the lodge’s central communal area, where meals are served and where guests can graze on snacks throughout the day. Walking from the central building to your kulalas requires only a few steps, but amounts to an intrepid journey when trying to cover ground under the midday sun. Arrive at your kulala to find the carefully appointed interior with a canvas tented frame, raised from the desert soil and completed in dark wood and gauzed windows. A deck is located at the front of the structure and a balcony above the bathroom can be fitted out with single or double mattress for sleeping under the stars.

Despite Kulala Desert Lodge’s remote location, it goes to great lengths to reduce the environmental impact of its operation. The Lodge’s electricity is powered by a hybrid system of solar energy during daylights hours and a diesel generator during low-light hours, meaning the generator is only used for eight hours a day. Each tent is linked to a small solar geyser which offers piping hot water throughout the day and night. Wilderness also add extra weight to Eco Awards Namibia, the domestic rating system which includes 51 lodges across the country.

Wilderness’ environmental credentials are combined with social initiatives to involve local communities in the conservation effort. Wilderness supports the independent Children in the Wilderness, a not-for-profit which began in 2002 with an array of programmes including education, training and the closure of camps to host children for group stays. The long-term approach to conservation is robust, reinforced by the hiring and training of staff within each camp.

The lack of predators is good news for athletics types intent on visiting Kulala Desert Lodge. Keep your hands off large rocks and trust your not-so-agile footwork to ward off nasty snakes, and you’re good to go on the trails that navigate away from the property. Your main consideration should be the desert heat and making sure that you don’t take on an overly-ambitious out-and-back, only to realise that your best leg was your outbound shuffle.

During my visit, I made a morning run from a small roundabout c. 300m from Kulala Desert Lodge to Wilderness’ entrance to Sossusvlei, just over 2.5km from the roundabout itself (see Strava readout). The road rises gently from the roundabout, marked on each side by American football-sized rocks. At the entrance to the park, itself marked by four triangle-shaped concrete blocks, whip around another makeshift roundabout anti-clockwise / North American-style (you’ll see this heresy makes the most amount of sense, allowing you to enter straight and accelerate out of the bend to begin your return leg).

As for footwear: the road’s surface has small stones and soft-pack pebbles – best to use a trail shoe with a small amount of tread than risk slipping in road shoes as you start to hallucinate during the somewhat swift final 500m.