The Youghiogheny: One River – Many Personalities 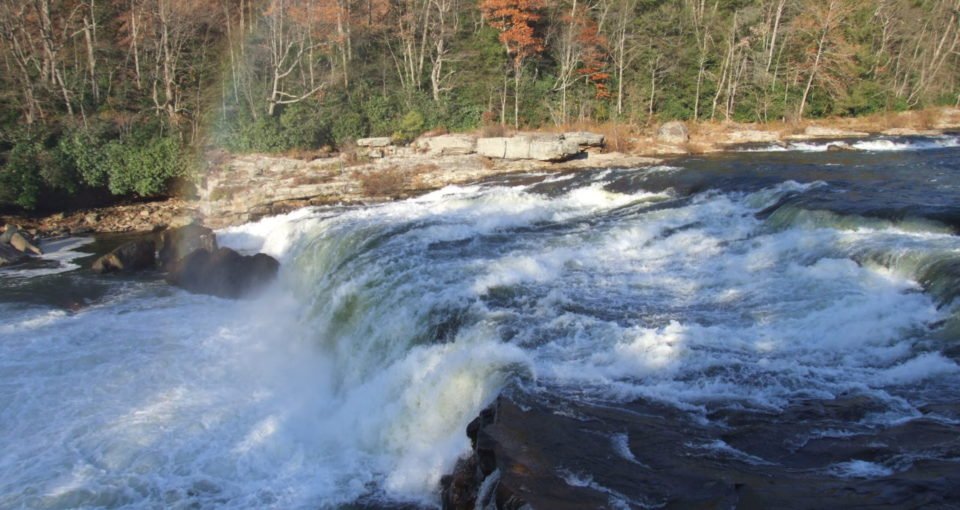 The Youghiogheny or Yough (pronounced ‘yaach’) is a river with a split personality. Split between four distinct sections, and changing in feel and flow with the seasons, it’s a river that has something to offer everyone; from the most experienced whitewater kayaker to a family group looking for a grand day out.

I have experienced three of the four sections. I first visited on Labour day, when the sun was shining and the water was warm. The summer dam release held the flow at a steady level and the river was packed with herds of kayakers and flocks of rafters. I paddled the Upper, which thanks to regular summer dam releases, is the mainstay of the north east class IV/V paddling community. It was a surreal experience, working my way through boulder gardens with people so experienced on the Yough that they knew all the moves to make, the names of the rapids, and the dangers they held. It was also strange being on a remote stretch of river with so many people, but the feeling of community was undeniable.

I was also able to take advantage of the hard work of American Whitewater, which lead to the decision by the park authorities to extend a pilot scheme allowing kayakers to run the falls at Ohiopyle without being part of a scheduled event. Following an exciting run of the falls I paddled the lower Yough.

For kayakers living in the area the Lower is often their first taste of class III and offers exciting rapids and plentiful play spots. The atmosphere is different to that on the Upper. Bigger volume rapids and simpler moves attract a different crowd, and I met some inspirational people kayaking into their 70’s and 80’s. Raft guides here herd the rafts and kayaks much like shepherds with a flock of brightly coloured sheep.

Skip to November and the cold weather of fall, near freezing temperatures at night and cool water mean the rafters have gone and so have many of the Kayakers. The Upper Yough is a different river. Without the knowledgeable guides, the boulder gardens offer an enjoyable mental challenge and the fear of the unknown keeps the heart rate up. The remote gorge has shed the crowds and has regained its natural magic. Winter rain and snow melt has also brought the top Yough into flow.

The top is undeniably my favourite section; a short run taking no more than an hour or two to complete, but still with all the features of a great river. It starts with a bang, delivering Swallow Falls just after the put on followed by engaging class IV/V rapids almost all the way to the take out. No crowds or rafters here, but plenty of spectators watching the locals fly down Swallows after work, or for the third and forth time on a weekend. An awesome way to forget the world for an hour and put a big smile on your face.

On the Lower in fall the crowds are gone and an extra fleece is not a bad idea. For those willing to brave the cold, higher winter flows offer great play and pushier rapids. The pilot scheme allowing the falls to be run is over now, and the high flows would make an attempt not only illegal but serious. The town of Ohiopyle based at the get on feels empty compared to earlier in the year, but hardy locals can still be found taking advantage of the tranquility.

Rafting on the Yough is available for all ages and all abilities, and runs from March to November. For families the middle Yough offers easy class I and II rapids if the lower sounds like too much. There are many rafting companies operating out of Ohiopyle which offer guided and unguided trips on the Upper, Middle and Lower.

Kayak instruction and guiding is also available, and for those with a small amount of experience Wilderness Voyages even run free Friday night sessions on the loop section of the lower Yough. It is also possible to go climbing, mountain biking, road cycling and walking. With plenty of places to hire equipment from.

American Whitewater has river guides on all the sections of the Yough while Ohiopyle State Park website are a good source of information on accommodation and other attractions.