A Greek Odyssey by Kayak 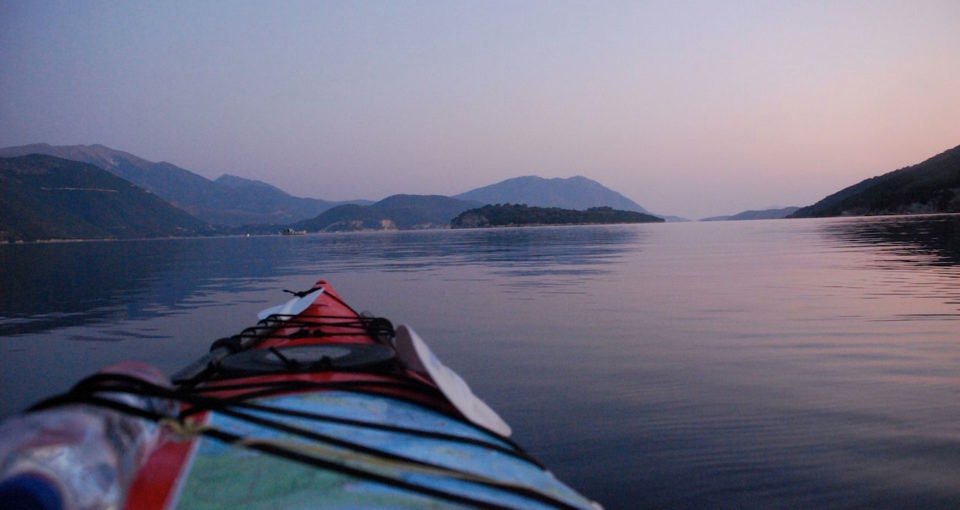 As enthusiastic Scottish river and sea kayakers, my friends and I decided to embark on a trip to sunnier climes in 2008.  Over 6 days we island hopped around the Greek Ionian Sea in sea kayaks, enjoying one of the quietest and undeveloped parts of central Europe’s coastline.

We travelled  to Vassiliki, which sits in a beautiful horseshoe bay in the south of the island of Lefkas, to the west of Greece.  Vassiliki is one of the top windsurfing destinations in Europe, and the bay comes alive with windurfers from sunrise to sunset in the summer months.  We decided to hire kayaks and most of our equipment through Ionian Explorers, who are based on the beach in Vassiliki.  They supplied tents, stoves and maps, leaving us to cover food and clothing.

We completed the trip in August; the hottest month of the year in Greece.  Evenings were pleasant needing only a silk sleeping bag, but at midday, the temperatures peaked above 50 degrees centigrade, fortunately only on one day.  It often didn’t feel as hot, as we were generally out on the sea with a breeze keeping us cool.  Staying hydrated was key on long days on the sea, but if the hot temperatures don’t appeal, Ionian Explorers offer trips throughout the season, well into milder months.

We chose the self-guided Ionian Ring tour.  We were supplied with a map of the area and a suggested routes.  We had a general idea of where we wanted to go, but chose campsites on an ad hoc basis.  There are many coves and empty beaches to camp on in the area, and we never found ourselves struggling.

We kayaked along the southern coast of Leftkas, then made a small crossing to Meganissi.  From there, we travelled around the south of the island, which resembles the a series of submerged Alpine peaks.  From the tip of Meganissi, we made a longer open-water crossing over to Nisos.  On the its eastern coast lies the fishing village of Kalmos, which is perfect for picking up supplies.  About 1km to the north of Kalamos lies is a beach which is a perfect campsite.  Nisos resembles an arid, North African landscape in the south, but the north is lush and is completely covered in forests; a stark contrast for such a small island.

From Nisos, we made the longest open-water crossing of 12km to the north end of Meganissi.  We always made sure we were positioned to make the open water crossings at dawn, when the sea is at its calmest and there is the least chance of encountering large boats.  We were lucky to have a week of calm waters, but this is not a trip to be undertaken by the weak or inexperienced paddler.

A worthwhile detour is to Skorpios Island, which lies about 3km to the northn of Meganissi.  The Island is privately owned by the descendants of Aristotle Onassis, the Greek shipping Magnate.  It’s a relatively small island, but the sprawling mansion, cultivated lawns and private harbour are in stark contrast to the surrounding area.  There is a small beach that’s open to the public and perfect for a stop for lunch.

From Meganissi, we travelled down its western coast and back to the south of Lefkas.

The Ionian Sea boasts a coastline of contrasts, from sheer cliffs to sandy beaches.  Seeing it from the comfort of a kayak is a relaxing and fulfilling way to travel.  Although Vassiliki itself is vibrant, our campsites most evenings were tranquil, and we were able to fish and snorkel.

Follow the London to Athens route planner on greentraveller.co.uk until Patras. At Patras, take a bus to Lefkada, heading to the south of the island and Vassiliki. Alternatively, take the same greentraveller.co.uk route until the ferry port at Bari, from where you can take a ferry to Igoumenista with Superfast Ferries, taking a bus south to Lefkada.

The hire of the equipment from Ionian Explorers cost €240 per person.  They ask you to arrive the day before you depart.  For that evening, they were happy to give us tents, and we slept on the beach.  If you’d rather not camp, or spend some more time on Lefkada before you depart, Greeka has various types of accommodation across the island.